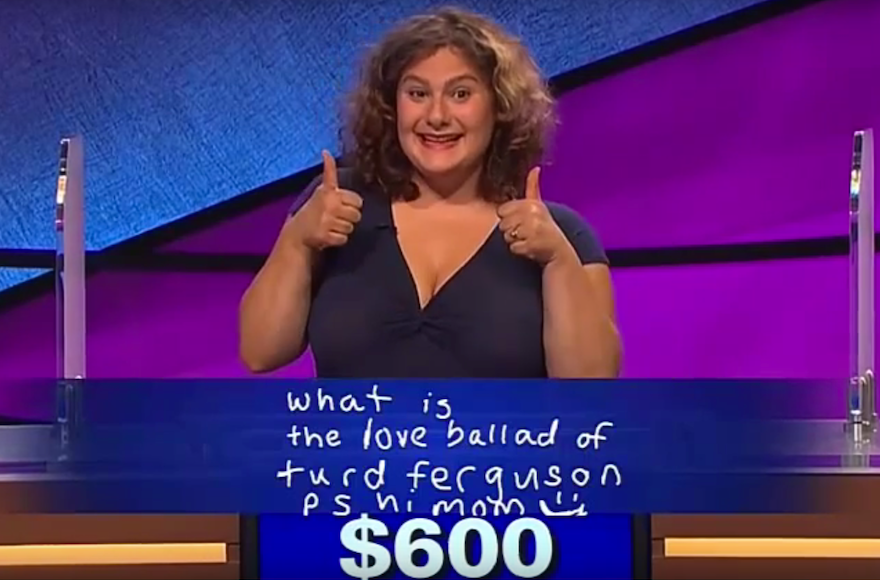 Former JTA intern Talia Lavin was called a "hero" on social media for her stunt on Jeopardy on Wednesday, Sept. 16, 2015. (YouTube)
Advertisement

If it were asked on “Jeopardy,” it might be phrased like this: “Former JTA intern who became a social media sensation for making Alex Trebek say ‘Turd Ferguson.'”

To which the answer (or question, in the distinct lingo of the long-running game show) would be: “Who is Talia Lavin?”

Lavin, who worked at JTA for about a year starting in the summer of 2013 and is now a fact checker at The New Yorker, didn’t win much money as a contestant on Wednesday night’s “Jeopardy” episode, but she did win quite a bit of fame. She was trending on Facebook Thursday morning and mentioned everywhere from Cosmopolitan to USA Today.

READ: ‘Jeopardy’ rabbi for one night only

Her winning moment was a reference to “Celebrity Jeopardy,” one of the popular recurring skits of the late-‘90s era of “Saturday Night Live.” In the skits, Will Ferrell impersonated “Jeopardy” host Trebek and dealt with a host of raucous characters, from Sean Connery to John Travolta. On it, a devious Burt Reynolds (played by Norm Macdonald) frequently asked Trebek to call him the nonsensical name “Turd Ferguson.”

When Lavin was stumped on the show’s Final Jeopardy question, she wrote in the words: “What is the love ballad of Turd Ferguson? P.S. hi mom.”

Trebek was consequently forced to say “Turd Ferguson” on an episode of Jeopardy for the first time.

The audience laughed politely at the reference, but the Internet exploded with responses, and Lavin quickly became a trending topic on Facebook by Thursday morning.

The soundtrack to your day should just be Alex Trebek saying “Turd Ferguson” on air over and over: http://t.co/8YbYHSDtvs

Lavin was frequently referred to as a “hero” on Twitter.

Before she became a darling of the Internet, Lavin wrote on news and pop culture topics for JTA. She was also JTA’s resident Ukraine expert during the 2014 “Euromaidan” revolution in which President Viktor Yanukovych was deposed. (Lavin, who is fluent in Ukrainian and Russian, had spent the previous year as a Fulbright Fellow in Eastern Europe.)

Read some of her past articles here, and watch her legendary Jeopardy stunt below.