Worth a trek: Searching Moroccan mountains for etrogs 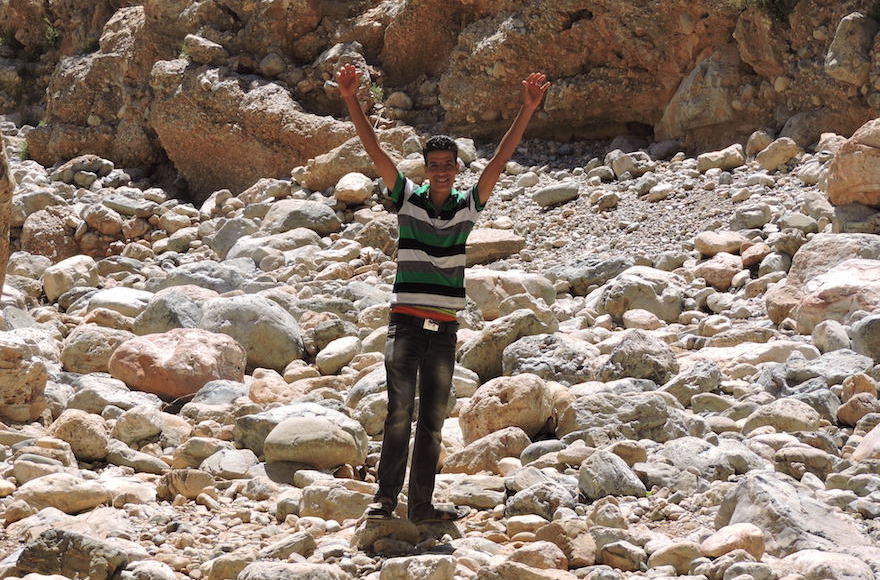 My "fixer," Mohammed, experiencing a moment of triumph along the etrog trail. (Ben Sales)
Advertisement

ASSADS, Morocco (JTA) — We had to cross the gorge, and the only way was to walk single file on a narrow concrete gutter, maybe a foot wide, that bridged the two cliffs. Below us was a long, perilous drop onto the rocky depths.

I was traveling deep into the rural communities of Morocco’s Atlas Mountains, and so I’d expected to get a little dusty. But no one readied me for this afternoon trek in the desert sun. I was wearing a button-down shirt, slacks and dress shoes, and I was carrying my iPad, computer, camera and passport. But I wasn’t entirely unprepared: I had 1.5 liters (about 6 cups) of water slung across my shoulder.

READ: In off year for Israel, Morocco is etrog hot spot this Sukkot

It was hot and sandy, and the sun shone down on us from a clear sky. Sweat was drenching my back. My translator, the only person in the group whom I could talk to, was several steps ahead of me. I was in the sandy middle of nowhere, feeling exhausted and, since I was standing on the precipice of a cliff in an unfamiliar place, a little scared. I started walking and didn’t look down.

But I was a man with a mission. In between audible whispers of “holy shit,” I had this thought: There had better be some etrogs at the end of this trail.

When I told people I was going to Morocco one week before Rosh Hashanah to write about the country’s insular, centuries-old etrog industry, they told me I was either crazy (it was hard to infiltrate), too late (etrog season was ending) or both. But Berbers who spend their summers growing fruit in a Muslim country for a Jewish holiday felt like too good a story to miss, so I eagerly booked my flight.

Today, almost no Jews live in Morocco, though a few dozen Jewish merchants still support the industry, sending etrogs — known as citrons in English — to Jews around the world to use on Sukkot. Because 5775 was a “shmita,” or sabbatical year, when Jewish law prohibits agricultural activity in Israel, demand for Moroccan etrogs has been especially high there this season, even though the countries don’t have formal relations. I was determined to find out just how Moroccan etrogs are grown and brought to the Israeli market.

Organizing the trip, however, ended up being far more complicated than making a couple of calls. My one contact in the Moroccan etrog business said the merchants feared journalists and wouldn’t talk to me. An Israeli professor looked at me like a concerned parent after I asked for help visiting Berber citrus farmers in the Atlas Mountains. He wrote me an email hours later saying he was “somewhat worried” about me. It was too short notice, he felt, to plan the trip properly.

Running out of leads, I used British phone-directory websites to track down a London rabbi who literally wrote the book on Moroccan etrogs. But he told me he’d just returned from Morocco, was worn out from the flight and couldn’t talk.

“Go to a town called Assads,” he advised me. “When you get there, ask for Jawad. Tell Jawad to take you to the place he took Yashar. Shanah tovah.”

Then he hung up on me. My flight was in two days. 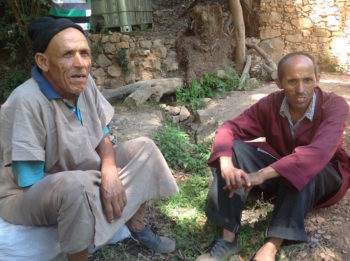 Assads, it turned out, was a small mountain village hours away from the nearest city and barely accessible by car. To get there I’d need someone to take me. And to speak to etrog growers, I’d need to connect with someone from the town who could introduce me and guide me to the etrogs. This was not exactly an agricultural tourism hot spot.

By the time I reached the Tel Aviv airport for my flight, I’d managed to make some tentative plans. A Moroccan citrus expert, Mohamed El-Otmani, arranged someone to drive me to Assads, along with a fixer who would show me the area.

The next morning, I was shaking hands with a burly man named Mohammed who would be my driver. Mohammed, I discovered, did not speak English. Neither did the fixer. I didn’t risk asking whether either of them spoke Hebrew.

“Don’t you speak Arabic?” El-Otmani asked me. I do not. So he found me an off-duty English teacher to translate, and the four of us — driver, translator, fixer and me — set off.

Our beat-up Mercedes drove from paved road to gravel path as the cosmopolitan beach city of Agadir, where I was staying, gave way to smaller, drearier towns. French disappeared from shop signs, replaced by Arabic. Unlike Agadir, where many people wore jeans, almost all the women walked with their heads covered, while the men wore beards and caftans. Then the towns faded away, until we had to stop on the dusty road to let a herd of goats pass by.

An hour into the journey, my translator asked if I was “good at walking.” It seemed like a bizarre question, and honestly, the answer was no. Born with mild cerebral palsy, I’ve always limped on my right side and had trouble balancing.

But I wasn’t going to back down. Yeah, sure I was good at walking, I said. How bad could it be?

Four hours later, after my driver had asked several children on a deserted highway for directions, we finally reached Assads and the end of the road. And Jawad, the rabbi’s contact, was nowhere to be found. There were many people named Jawad in Assads, locals said. And anyway, none of them were around.

My only hope was to follow our fixer, on foot, and pray I found an etrog tree. The four of us set off.

At first, the path was flat and narrow, with a cliffside on my left. Then it got narrower and rougher. Then a concrete gutter appeared to our right, with us balancing in between  — me trying to compensate for my unwieldy bag.

I jumped in the gutter and soon there was nothing on either side. All four of us were crossing the gorge.

During the hour that followed, we climbed over boulders, along steep drops and through rocky valleys where there was no path at all. When I slipped and caught myself, watching rocks trickle down the mountainside and disappear, I kept walking. It was my only option. 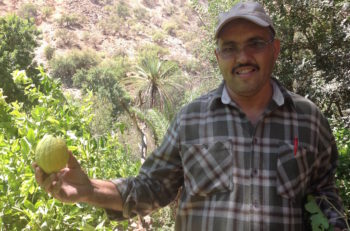 Here I was in the remote reaches of Morocco, carrying valuable equipment, with four men I didn’t know who were speaking a language I didn’t understand. My safety — let alone my story — was riding on their trust.

But then, as we got to flatter terrain, my fixer stopped and grinned at me. He raised his hands in triumph and motioned at me to take a photo. Down the path, as we passed by a river, he pulled a cluster of grapes off a vine; we all shared the snack. I allowed myself to exhale. I looked back at the sandy brown mountainscape we’d just traversed, freckled with palm trees and set against a bright blue sky. Maybe this would all work out, I thought.

A couple hundred feet later, a man stood in front of us wearing a caftan and snow hat with what looked like a bush to our right. The fixer shook his hand. My translator pointed at the bush.

There it was, hanging just inches above the ground: a bright green etrog.

I soon saw others camouflaged among wide green leaves and weeds. The bush was, in fact, part of a grove. It looked less like the orchard I expected and more like a bramble — as if the fruit just happened to naturally grow there. I followed the branches down a rocky, uneven slope, dodging errant etrog vines and trying, once again, not to lose my balance.

The man in the caftan was Mohammed Douch, whose family had been growing etrogs here for at least three generations. He wasn’t much for description — when I asked him, three times, what his favorite part of the work was, he just said it was his tradition. But he was dedicated. He’s 67 and a retired restaurant worker, his face worn by deep wrinkles, but he treks out here for a couple of months every year to grow etrogs, he said, because the town “is a part of our body.”

Behind him, across a narrow path, was a two-story structure made of bricks and dirt with a canopy of branches for a roof. Usually, Douch explained, he lives in the city. But each summer he comes here to reside in nature.

He repeated most of what he said to compensate for the language gulf that separated us, even with a translator. It’s an experience I had throughout my trip to Morocco. Usually the failure to communicate made me feel helpless, like I was missing a large part of a country I wanted to learn about.

But in the middle of the Moroccan mountains, amid a group of people I could barely talk to, I felt a sense of belonging. Moving to a hut with a roof of branches to tend to etrogs and connect to tradition? That’s something I could understand.