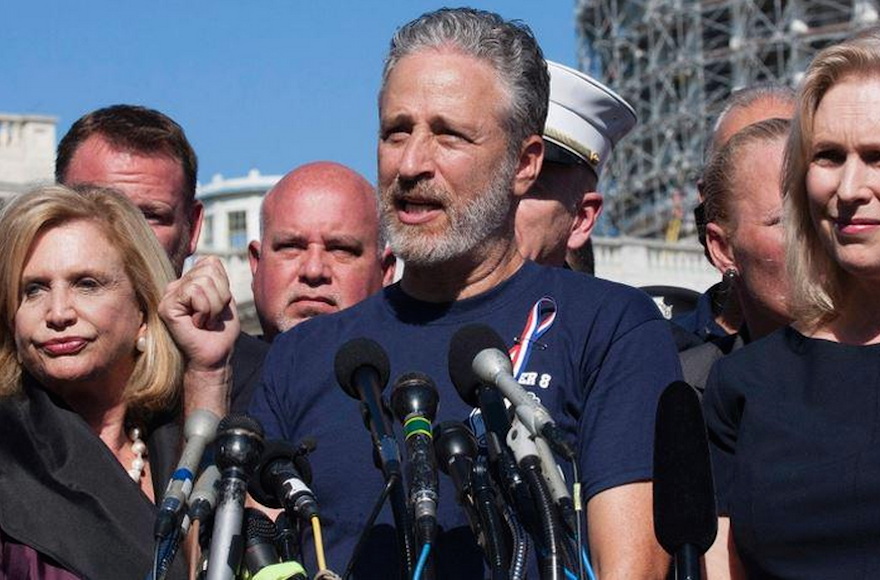 (JTA) — Jon Stewart lobbied members of Congress to extend benefits to workers and first responders who were injured or sickened by the Sept. 11, 2001 attacks.

The former host of “The Daily Show” spoke to Ground Zero first responders, advocates and other Sept. 11 survivors at a rally outside the Capitol building on Wednesday. Later in the day he joined them in going door to door to talk to individual lawmakers about the James Zadroga 9/11 Health and Compensation Act, which allotted federal funds for the care of rescue workers but is set to expire at the end of the month.

“I want to apologize to all the men and women, first responders, that you had to come down here today,” Stewart said at the rally. “I’m embarrassed that you, after serving so selflessly with such heroism, have to come down here and convince people to do what’s right for the illnesses and difficulties that you suffered because of your heroism and because of your selflessness.”

The health care law, which provides medical monitoring and treatment to the first responders, was passed in 2011 but was limited to five years as part of a compromise with Senate Republicans.

Republican leaders are considering an extension of the law but have not been specific as to when they plan to address it.

A spokesman for Senate Majority Leader Mitch McConnell, R-Ky., who voted against passing the law in 2010, told USA Today that “Congress intends to extend [the law], and the committees of jurisdiction are already at work on that.”