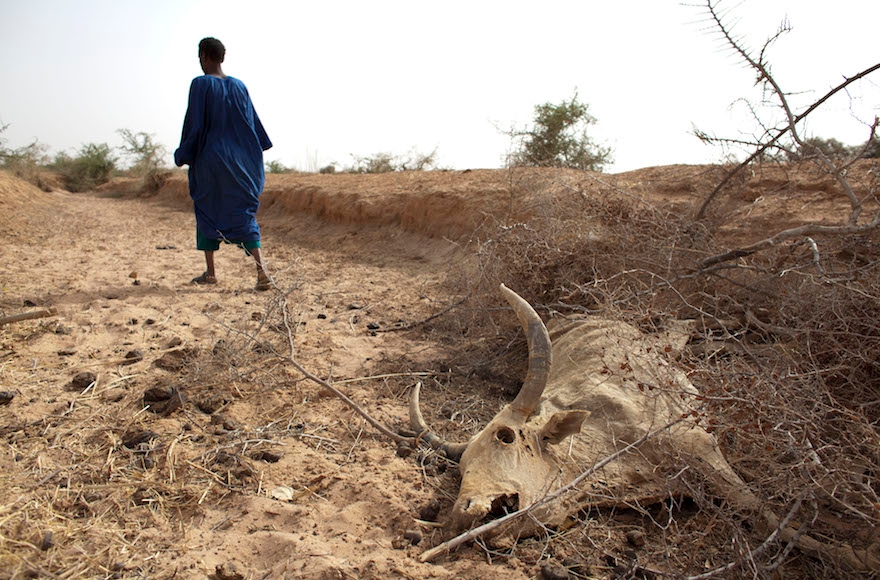 A herder outside Dikka village, in the Matam region of northeastern Senegal during a drought in 2012. (Rebecca Blackwell/AP Images)
Advertisement

“The Holocaust may seem a distant horror whose lessons have already been learned,” he writes. “But sadly, the anxieties of our own era could once again give rise to scapegoats and imagined enemies, while contemporary environmental stresses could encourage new variations on Hitler’s ideas, especially in countries anxious about feeding their growing populations or maintaining a rising standard of living.”

Snyder, author of the new book “Black Earth: The Holocaust as History and Warning,” draws parallels in the Op-Ed between the World War II and more-contemporary battles for resources.

Adolf Hitler invaded the Soviet Union to seize Ukraine’s fertile soil — as well as to kill the Jews living there — Synder writes. The Nazi dictator was motivated, he explains, by his obsession with securing Europe’s resources for the German people.

More recently, the Rwandan genocide in 1994 “followed a decline in agricultural production for several years before,” notes Synder. And in Sudan, he writes, drought helped start the Darfur genocide by forcing Arabs to migrate to land inhabited by non-Arab ethnic groups.

Who could be next in this unfortunate pattern? China, argues Snyder.

“The danger is not that the Chinese might actually starve to death in the near future, any more than Germans would have during the 1930s. The risk is that a developed country able to project military power could, like Hitler’s Germany, fall into ecological panic, and take drastic steps to protect its existing standard of living,” Snyder writes.

Snyder further argues that the strain of climate change denial common in American politics is reminiscent of Hitler’s attitude toward science. Hitler thought war was necessary because he refused to believe that advancements like irrigation, crop hybrids and fertilizers could help feed his people. The denial of climate change could again push the world toward conflict, Snyder writes.

“By polluting the atmosphere with greenhouse gases, the United States has done more than any other nation to bring about the next ecological panic, yet it is the only country where climate science is still resisted by certain political and business elites,” he writes. “These deniers tend to present the empirical findings of scientists as a conspiracy and question the validity of science — an intellectual stance that is uncomfortably close to Hitler’s.”

This is simply insane. Like, lock up the author, he’s insane. http://t.co/iLeM0RsEMJ

Historians have also questioned some of the other claims in Snyder’s book. In the National Interest, Princeton University professor David A. Bell wrote that Snyder focuses too much on Polish participation in the Holocaust.

Prominent Holocaust scholar Deborah Lipstadt told the Times: “I don’t agree with everything in ‘Black Earth.’ But [Snyder’s] such a bold and serious and incisive thinker and writer, he makes me go back and reassess what I think I’m sure of.”

Snyder concludes his Op-Ed by laying out the stakes for the world as he sees them.

“Today we confront the same crucial choice between science and ideology that Germans once faced. Will we accept empirical evidence and support new energy technologies, or allow a wave of ecological panic to spread across the world?” he writes. “Denying science imperils the future by summoning the ghosts of the past.”