‘Everybody Loves Raymond’ creator samples the globe with famous friends 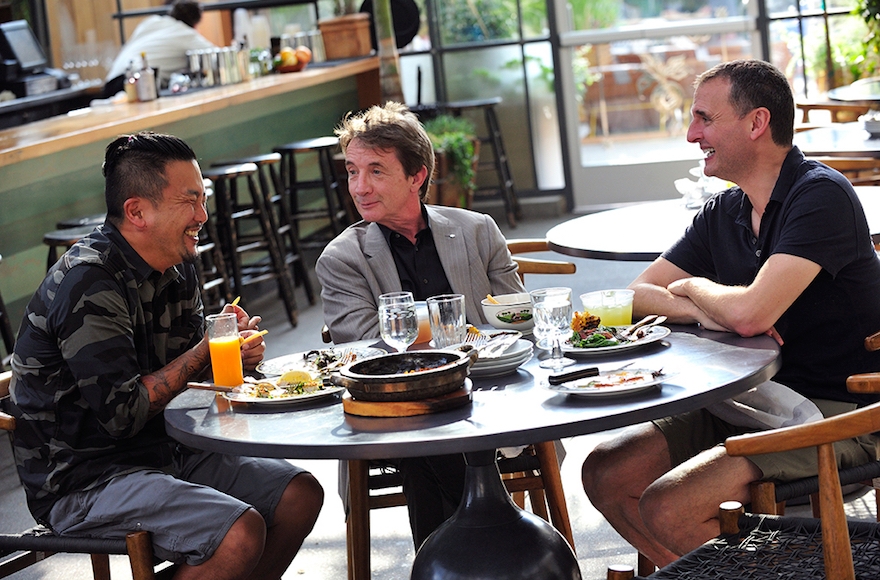 From left: Chef Roy Choi, Martin Short and Phil Rosenthal, in a scene from the new PBS series "I'll Have What Phil's Having." (Courtesy WGBH)
Advertisement

Rosenthal is best known as the creator and behind-the-scenes genius of “Everybody Loves Raymond,” the successful sitcom starring (and based on the comedy of) Ray Romano. But now Rosenthal is in front of the camera and the star of a new show: “I’ll Have What Phil’s Having.”

It’s a six-part, unscripted series on PBS that features him sampling local fare in exotic ports around the globe — including Hong Kong, Barcelona, Paris and Tokyo. He visits markets, artisans, vineyards and restaurants. Rosenthal’s usually accompanied by family, famous foodies and friends — Romano and Martin Short among them — with whom he shares his enthusiasm and jokes.

And, yes, assuming the show is renewed, “I would love to go to Israel,” he tells JTA in a telephone interview. “What I loved most was the people I met, and the food was spectacular. I can’t wait to go back to Tel Aviv, which is such a happening scene. I had the best chicken pita of my life there.”

And while gelato and steak were on the menu during his recent sojourns, he also sampled rare delicacies like pond loach, an eel-like fish that live in East Asian rice paddies. As a result, Rosenthal acknowledges he just might be confused with a Jewish Anthony Bourdain (who, incidentally, has one Jewish parent).

“When we watch Bourdain, we live vicariously. I’m trying to encourage people to travel. I want them to watch and say, ‘If that putz can go outside …’ Maybe that should be the name of the show.”

Rosenthal admits to having a love-hate relationship with food. He loves food — now — but not so much when he was younger. As he says in a voiceover at the start of each episode, there were “things I never tasted growing up, like food with any flavor. In our house, meat was a punishment.”

In retrospect, Rosenthal doesn’t blame his mom — it was her source material.

“My mother made recipes from a cookbook that I swear had to be anti-Semitic,” he says.

Still, Rosenthal acknowledges the importance of food in Jewish culture.

“Jackie Mason had a fantastic line that after a show, in the street, the gentiles all say, ‘Let’s have a drink.’ The Jews say, ‘Did you eat yet?'” he says.

“Food is a huge part of who we are. It’s celebratory. It’s family time. It’s maybe also celebrating abundance. In or history, there was time food was in short supply. The fact that we can eat is a symbol of personal freedom and calls for celebration.”

Of course, no matter what your religion or ethnicity, good food leads to a kind of bonhomie that fosters conviviality and creativity. Rosenthal has said, only half-jokingly, that he owes the success of “Everybody Loves Raymond” in large measure to good craft services — the food that’s put out for the people working on set.

“If there’s just crap out, you’ll grab it and go on with your day,” he says. “But if the table is suddenly filled with nice things, you’ll grab a bite and turn to the person next to you, and right away you’re talking and you’re friends.” 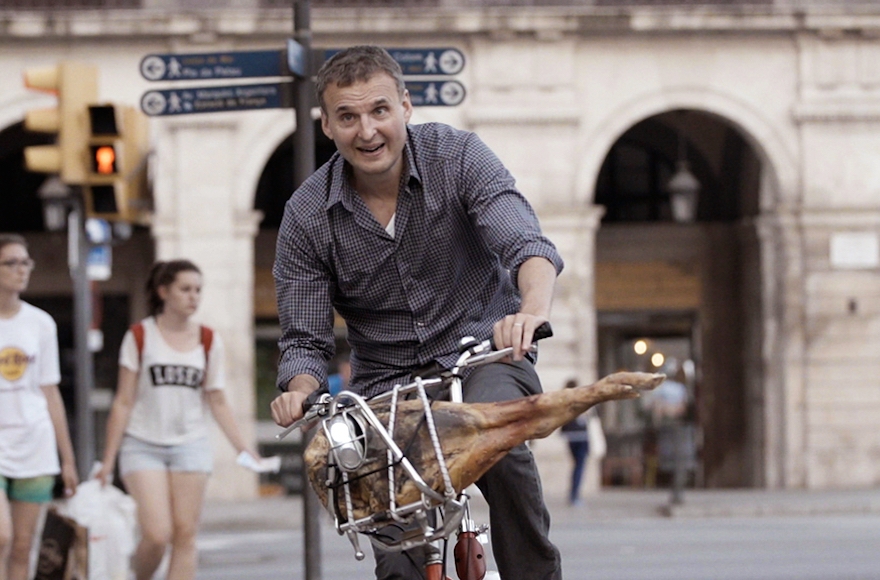 Phil Rosenthal, biking with a ham in Barcelona, in a scene from “I’ll Have What Phil’s Having.” (Courtesy WGBH)

“These are the things I care about: food, family, friends, laughs and travel,” Rosenthal says. “And they are all included in this show. That’s why — and don’t tell PBS — I would pay them to do it.

Rosenthal had ample time to test the limits of that love during the nine highly successful seasons of “Raymond.” Still, in the midst of the show’s success, Rosenthal admits he always feared the other shoe was going to drop at any moment.

“I can always find the downside,” he sighs.

“As I’m experiencing this wonderful success, this wonderful camaraderie, [but] as a Jew I’m thinking, ‘You’ll never have this again.’ But in a way, that’s good to know, so you can appreciate the moment while it’s happening.”

It’s not as if Rosenthal has been a recluse since the show ended. He won a Peabody Award (and earned an Emmy nomination) for co-writing “America: A Tribute to Heroes,” a benefit concert and fundraiser for victims of the 9/11 attacks that was broadcast simultaneously on 35 TV channels.

He also traveled to Russia to help produce a local version of “Raymond” that was eventually called “The Voronins.” That became the subject of a hilarious documentary, “Exporting Raymond,” which had a 2010 theatrical release and debuted on Netflix this month.

READ: Adele and Barbra Streisand are friends — and they share recipes

The film — which he wrote, directed and starred in — deals with Rosenthal’s frustration when he discovered that comedy doesn’t always translate well. A highlight of the documentary is when Rosenthal drinks and dines with an extended Russian family. The camaraderie he experienced there is a theme that comes up again and again in conversation.

“We’re attracted to people with a similar sense of humor and by eating with them,” he says.

“I saw her in a play and thought she was really funny,” he says. “The next time I saw her was by accident at a street-food fair. I was eating a giant rib with the juice dripping on my T-shirt and she was approaching with a mutual friend.

“When we were introduced, I told her I was a big fan of hers and she said she was a big fan of mine, which was not true. She had no idea who I was. I’ve since reminded her that our entire relationship is based on a lie. I think she liked the look of the rib in my hand.”

Rosenthal arranged to cast her in a play he was in and the rest is history.

“You know what happens when you’re in a play together,” he quips. “Before you know it, she took advantage of me.”

“I’ll Have What Phil’s Having” debuts on PBS on Sept. 28; check local listings.