Will German welcome of refugees come at Jews’ expense? 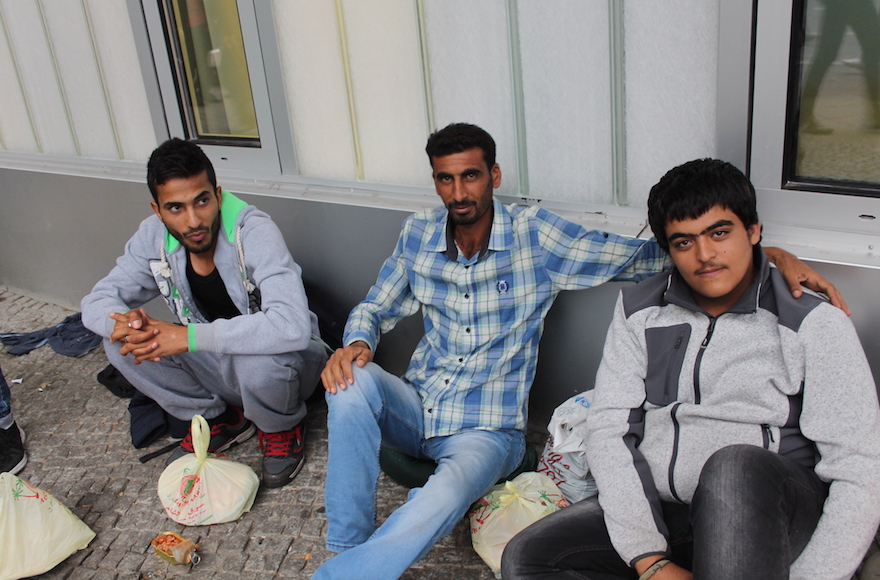 BERLIN (JTA) – The migrants sit slumped together on the sidewalk outside the State Office for Health and Social Affairs here, resting on donated sleeping bags, clutching food handouts, smoking, sleeping, fiddling with their cellphones.

They have come to this city by the tens of thousands, propelled by German Chancellor Angela Merkel’s pledge to welcome at least 800,000 asylum seekers into the country. Many are Syrians, but there also are migrants from Iraq, Pakistan, Albania, Afghanistan and other countries.

The Syrians have braved perilous journeys by inflatable raft through the waters between Turkey and Greece, marched for miles on sunbaked roads en route to Athens, circumvented Hungary’s harsh border controls and passed through Macedonia, Serbia and Austria to find their way onto trains bound for Germany.

“I had five years of civil war in Syria, but the journey here was more dangerous,” said Hadiya Suleiman, a 45-year-old mother of five from Deir ez-Zur in eastern Syria, where ISIS killed her 18-year-old son. “Here, I feel for the first time like a human being. We thank our mother, ‘Mama Merkel.’”

But many Jews are watching the wave of migrants flocking to Germany with some measure of alarm, concerned with what a massive influx of Arabs could mean for Germany’s Jews and the country’s relationship with Israel.

“This is not yet France, this is not yet London,” said one Israeli who has lived in Berlin for about 10 years and asked not to be identified. “Yet,” he added pointedly.

Outside the processing center at the health and welfare office in central Berlin, where thousands have come to register as refugees, the wait for documentation can take days, even weeks. In the meantime, the migrants have nowhere to go.

Every evening, a frenzy ensues when volunteers set up metal barricades to prepare for the arrival of buses that will take the lucky ones to shelters for the night. Those who can’t squeeze onto the buses must find a place to bed down on the street or in a nearby park. Police at the site keep watch — more with pity, it seems, than vigilance.

Monika Chmielewska-Pape, a Jewish lawyer originally from Poland, is among the volunteers helping the refugees. She collects clothing for them from friends and neighbors, drives the migrants to administrative appointments and tries to help them navigate Berlin.

“There are so many people here and the state is not able to help them,” Chmielewska-Pape told JTA last week. “The situation is very hard for refugees here. If we don’t help them, the people stay on the street.” 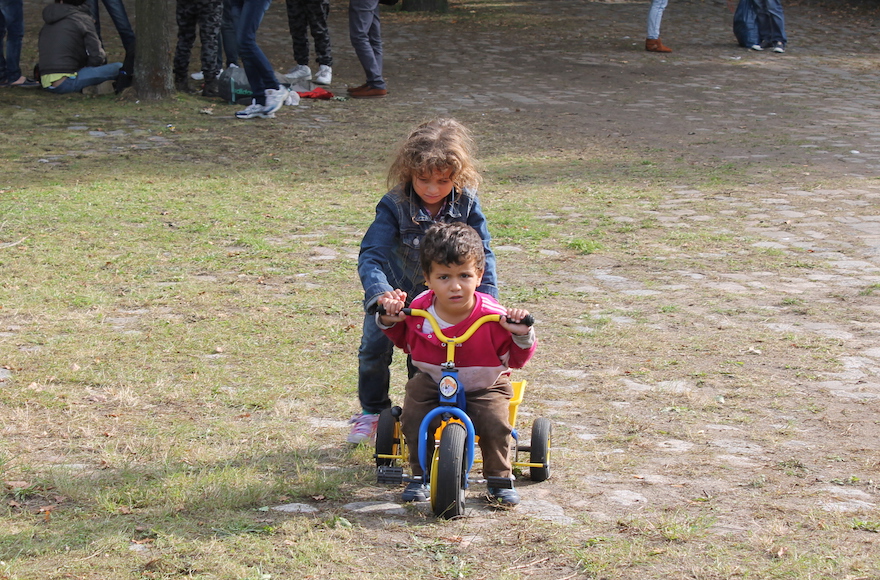 Some 1,500 refugees are being housed at a sports facility in Berlin adjacent to the Olympic stadium where Germany hosted the 1936 Olympics. (Uriel Heilman)

The irony of refugees fleeing through Europe to the relative safe haven of Germany is not lost on anyone here. Seventy-five years ago Jews were the refugees, trying to flee a genocidal German chancellor whose name became synonymous with evil. Few countries were willing to accept Jewish refugees; most were turned back and perished at the hands of Hitler’s Nazis.

Today, Germany occupies the opposite role, lauded as the most humanitarian and welcoming country in Europe. Both critics and supporters of Merkel’s refugee policy cite Germany’s past as a major motivating factor.

“Why is Germany more welcoming than other countries? Because of history,” said Berliner Stefan Hitziger. “It’s not only guilt, it’s a chance for Germany. It’s a chance for us to rebuild society anew, to have new inputs and new outputs.”

But many Jews here believe that Germany’s atonement for its past is coming at Jewish expense. They’re worried that the influx of hundreds of thousands of Muslims will turn Germany into a place hostile to Jewish concerns and to Israel – and that along with the migrants there are terrorist infiltrators who will try to realize their dreams of jihad on German soil.

It’s not that Jews in Germany are unmoved by the plight of the downtrodden migrants — many Jews here are themselves migrants from the former Soviet Union — but sympathy takes a back seat to the harsh concerns of realpolitik.

“I have no problem contributing some money to help some people, but for the German government to accept a tide of refugees? No,” said a Jewish immigrant who lives in Potsdam, near Berlin. Like others interviewed for this story who criticized Merkel’s welcome of the refugees, he asked that he not be identified.

“These Arabs have no possibility of integration,” he said. “They can’t contribute to society. I prefer Balkan immigration.”

For now, Germany’s Jews are keeping a low profile. They number some 200,000 in a country of 80 million. Their political influence is negligible.

“Why should the Jews talk publicly about it?” the Potsdam Jew said. “We’re not significant enough to make a difference in state policy.”

Jews aren’t the only ones with deep reservations, even resentment, toward the migrants. Many Germans share similar concerns about terrorist infiltrators and how Germany might be transformed by a massive influx of Arab and Muslim migrants. They, too, don’t want the problems of France, where unemployment, poverty and radicalism are problems among the country’s 6 million Muslims.

In a country where obsession with pure Germanic lineage still lingers, some Germans express their concerns more bluntly.

“In 100 years there will be no more German people in Germany, only Arabians and maybe Chinese,” said Otto, a Berlin taxi driver. “Berlin is full of immigrants from Poland, Russia and Turkey. The Poles have integrated well, the Russians so-so and the Turks hardly at all. The Arabs will be even worse.” 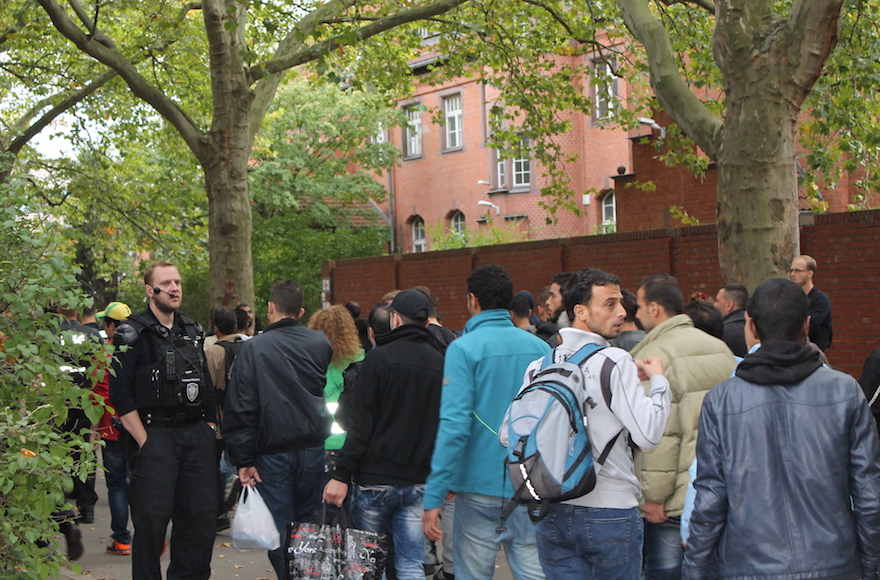 Thousands of migrants line up daily to register at Berlin’s State Office for Health and Social Affairs. (Uriel Heilman)

Josef Schuster, the president of Germany’s main Jewish body, the Central Council of Jews in Germany, has come out in favor of welcoming the migrants. In a Sept. 10 Op-Ed in Die Welt, he shunned any Jewish association with neo-Nazis screaming “Foreigners out!” and evoked the Jews’ own history as refugees. But he also said that Germany must make sure the refugees respect Germany’s positions on Israel and the Holocaust, not alter them.

“It’s also important that those who at present can’t return to their home countries will become familiar with our Western values,” Schuster wrote. “In Germany, that means respect for the values enshrined in the Constitution and also an acceptance that support for Israel is part of the political DNA of this country. Moreover, society by and large agrees that the Holocaust must be remembered.”

History isn’t the only reason Merkel is welcoming the migrants. With negative population growth, Germany needs more people to help sustain its economy, the strongest in Europe. At its current birth rate of 1.38 children per woman, the lowest in the world, Germany’s population will shrink by some 20 percent over the next 45 years. An influx of immigrants could offset the shrinking workforce.

For historical and practical reasons, it is vital to make sure these migrants are integrated successfully into German society, said Nina Peretz, a lay leader at the progressive Conservative Fraenkelufer Synagogue in Berlin. Peretz is helping spearhead a project to distribute Jewish-donated goods to the migrants on Nov. 22, Europe’s annual Mitzvah Day.

“You need to give these people a future in Germany because a large number are staying,” Peretz said. “If you don’t let them work and study, then you will have a problem. You have to integrate them and take the risk of what will happen. If you don’t help them, if you don’t talk to them, then the situation is uncontrollable.”