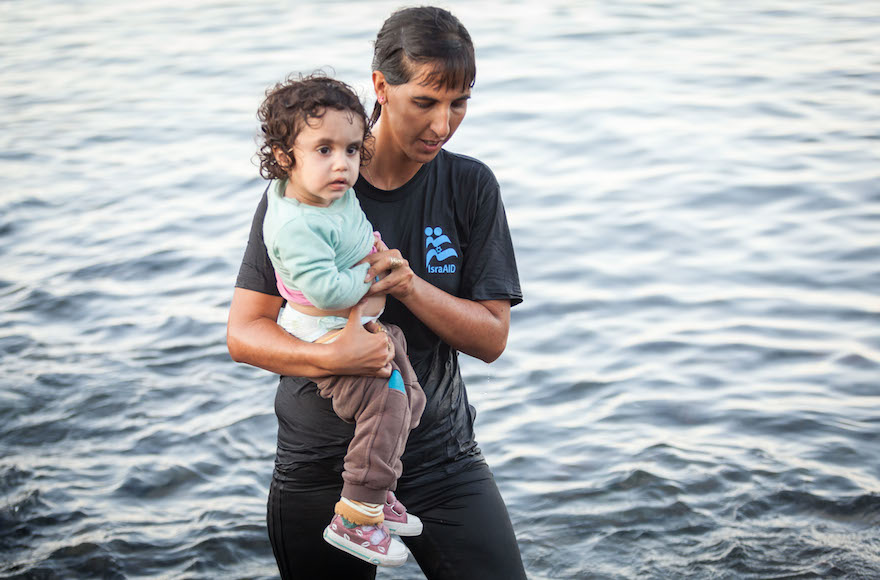 Israel Doctor Tali Shaltiel wades into the water to take a small Syrian child from a dinghy that arrived at a beach in the Greek island of Lesbos. (Boaz Arad/IsraAid)
Advertisement

LESBOS, Greece (JTA) — As the small rubber dinghy crowded with Syrians and Afghans emerged from the midnight-black sea to land on a desolate pebble beach, the first people to greet the bewildered and frightened refugees were two Israelis.

“Does anyone need a doctor?” Majeda Kardosh, 27, a nurse from Nazareth, shouted repeatedly in Arabic as the asylum seekers scrambled ashore amid cries of celebration and tears of relief at surviving the short but perilous crossing from Turkey to this Greek island.

Her team partner, Tali Shaltiel, 31, a physician from Jerusalem, stood knee deep in the water, helping a shivering 4-year-old girl out of her wet clothes and a pair of inflatable armbands that would have provided little protection had the overloaded boat capsized at sea.

Kardosh and Shaltiel are part of a small advance group of volunteers from IsraAid, an Israeli nongovernmental organization that is trying to provide some assistance to the hundreds of thousands of refugees and migrants who are flowing into Europe.

While IsraAid has plenty of experience in disaster relief and assistance in 31 countries — from the 2011 earthquake and tsunami in Japan to the Ebola outbreak in West Africa — this mission presents a unique challenge: The beneficiaries come from countries that are traditionally hostile, or even officially still at war, with Israel.

But for Shaltiel, that’s unimportant.

“You are meeting fellow human beings,” she said. “You see agony and pain, you see a need, then what does it matter where the person is from.

“In the end you hope that the human contact will bring us forward,” added Shaltiel, who also volunteered for the IsraAid mission in South Sudan.

But she does acknowledge that for the Syrians, Iraqis, Afghans and Pakistanis — who make up the vast majority of those arriving — having Israelis as a first contact in Europe can be unexpected and unnerving.

“We try to find a balance,” Shaltiel said. “On the one hand, we are wearing IsraAid shirts and speaking most of the time in Hebrew to each other. But, ultimately, you just want people to get help, you don’t want to put up barriers to that.”

Plus, in reality, even though the Israelis are wearing bright blue Stars of David on their shirts, most of the refugees don’t even notice amid the chaos and tumult of emotions of the landing beaches, said Kardosh, who does most of the communicating with them in Arabic. 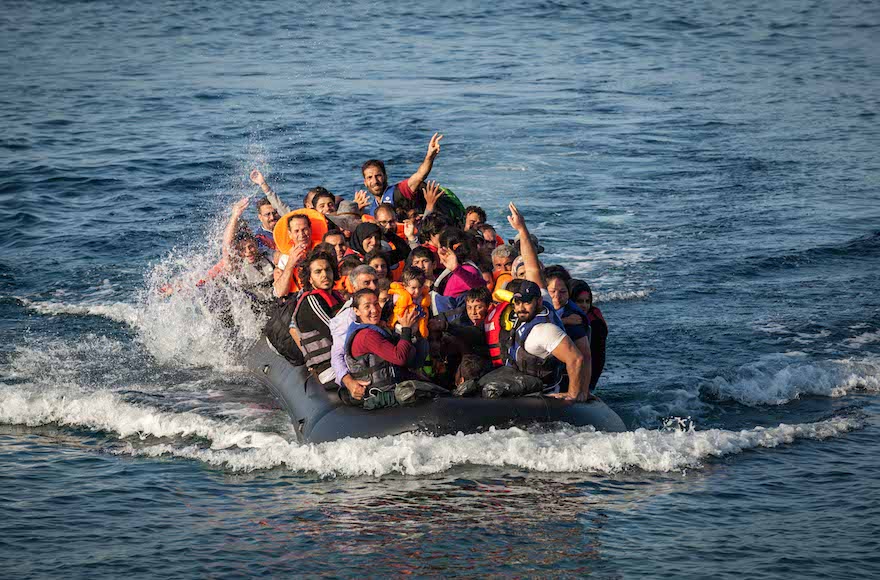 A dinghy carrying refugees arriving at a beach on the island of Lesbos in northern Greece. (Boaz Arad/IsraAid)

Among those who recognize the T-shirts, most have a positive response — although some are resistant. One man who was receiving treatment from Shaltiel kept asking Kardosh, “Tell me the truth, is she a Jew?”

“I tried to ignore him, but he persisted. Eventually I said to him, ‘She is here to help you, what does it matter who she is?’” Kardosh said. “After about 10 minutes he came back and offered Tali a biscuit and apologized.”

Another issue for IsraAid has been finding Arabic-speaking personnel who can communicate with the refugees. That’s particularly important for the second part of IsraAid’s mission, which is providing psychological first-aid to those who have experienced trauma.

One IsraAid volunteer social worker spent Saturday providing support to the family of a 5-year-old girl who drowned on the crossing. Another team was on the island of Rhodes assisting survivors from a boat that sank, killing 34, including 15 infants and children.

“We are working in complicated conditions and our Arabic speakers have that experience of working in difficult situations,” said Naama Gorodischer, IsraAid’s global programs manager.

Still, it’s a challenge for those who have never done field work before.

“Usually I’m dressed in heels and a skirt with my regular shift and going to the gym four times a week,” said Kardosh, who is also a lecturer at the Schoenbrunn Nursing School at Tel Aviv University.

READ: Will Germany’s welcome of refugees come at Jews’ expense?

“Now I’m here,” she said, pointing at the beach strewn with deflated dinghies, hundreds of life jackets, lost shoes and trash — the debris of thousands of journeys.

At the moment, the main aim of the team is to assess the needs of the refugees and find gaps in the services provided by the overwhelmed Greek authorities and other volunteer groups.

IsraAid plans to expand the medical teams and eventually establish a mobile clinic that will provide emergency care for new arrivals on the beaches. It will also expand the psycho-social help to bases in the registration and refugee camps that have been set up.

The NGO also has volunteers providing assistance on the Croatia-Hungary border. Eventually IsraAid plans to be in final-destination countries, like Germany, where they hope to help with refugee rehabilitation.

“The aim is to have a presence as an organization along the entire journey,” Gorodischer said.

On the beach in Lesbos, the work goes beyond the medical. When she is finished dealing with the hypothermia, dehydration, wounds and illnesses of the travelers, Shaltiel gathers some of the refugees to explain their situation to them. 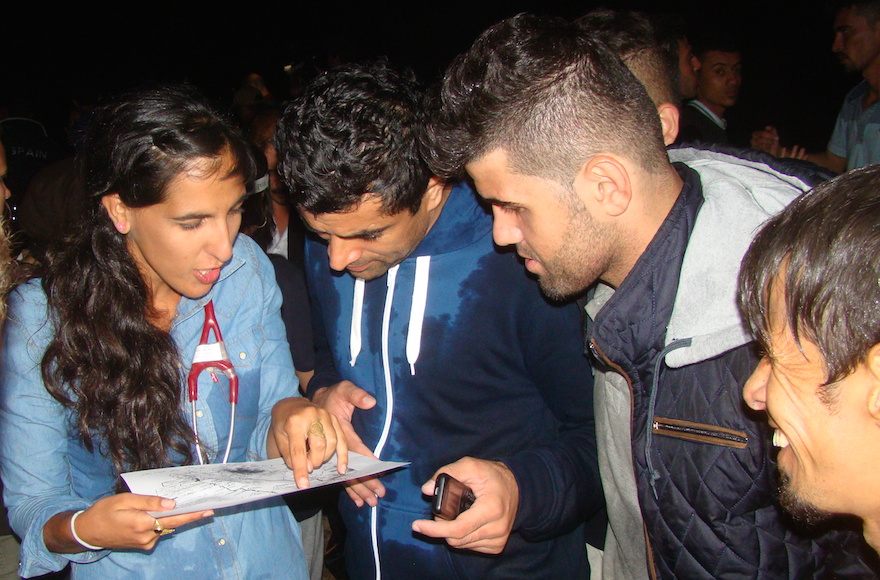 Dr. Tali Shaltiel explaining to a group of Afghans how to get to the refugee registration center some 40 miles away. (Gavin Rabinowitz)

Most have only a vague idea of which country they are in, or that they are on an island and not the mainland. None realize that their landing spot is still a grueling 40-mile walk from the registration camps.

“It’s safer to stay here during the night and start your walk in the morning,” she tells them, giving them a map made by the IsraAid team with instructions written in Arabic.

The volunteers look to assist in any way they can.

“The situation is chaotic, you don’t always know what you need in the beginning, so we keep looking for ways to help, to see what’s needed,” said Boaz Arad, a volunteer who was documenting IsraAid activities and also organizing the logistics and transportation.

After finding hundreds of people sleeping in the open along the road, IsraAid volunteers bought sleeping bags to distribute to families with children. They were also waiting for a shipment of donated baby carriers from Israel.

“During this holiest period of the Jewish year, we are proud to assist … in offering vital help to Syrians who fled the horrific war in their homeland and seek a new start,” said AJC Executive Director David Harris.

For Shaltiel, the sight of tens of thousands of refugees walking across Europe was especially poignant.

“When we say ‘Never again,’ it is also an obligation to do something,” she said. “Apparently I can’t stop the war in Syria, but I can do something.”