Ivanka Trump is pregnant with her third child 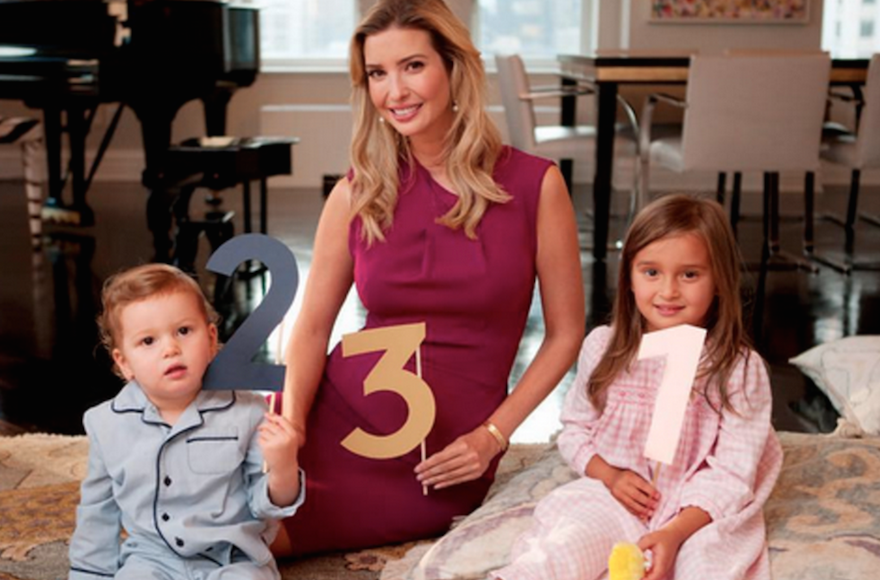 If you can’t get enough Trump, good news: Another one is on the way!

Ivanka Trump, who converted to Judaism in 2009, announced across her social media platforms that she is expecting her third child with husband Jared Kushner, a real estate mogul who owns the New York Observer.

I’m beyond excited to announce that Baby No. 3 will be arriving this Spring! http://t.co/01LSZwVgyk

Trump, who owns several businesses and is an executive with her father’s Trump Organization, already has a 4-year-old daughter, Arabella, and a 2-year-old son, Joseph. The fashion icon and businesswoman has hundreds of thousands of followers on Facebook, Twitter and Instagram.

Her little ones helped her announce the news by posing in a photo, posted on her Instagram account, holding the numbers 1 and 2. Trump held the number 3 over her belly.

A short video on her Facebook page captured the family getting ready for the photo in adorable fashion.

Trump, who keeps kosher and observes Shabbat, has explained in the past how her Jewish family values inform her public image.

“We’re pretty observant,” she told Vogue in February. “I really find that with Judaism, it creates an amazing blueprint for family connectivity.”

Grandpa Donald – who said in the recent CNN Republican presidential debate that his daughter should be pictured on the $10 bill – sent his best wishes to the family on Twitter.

So happy about my daughter @IvankaTrump’s announcement that she will be having a baby this spring. Congratulations!