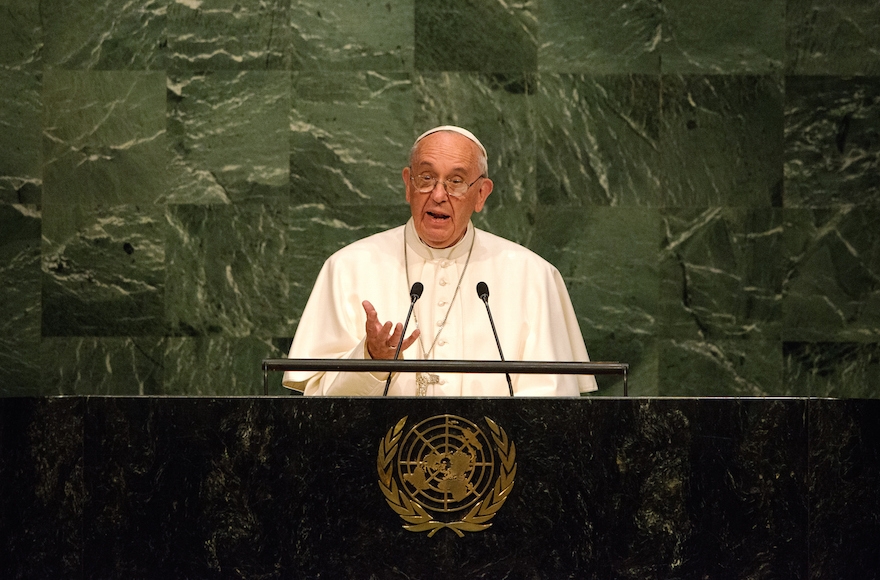 Pope Francis delivering an address to the General Assembly of the United Nations on September 25, 2015, in New York City. (Bryan Thomas/Getty Images)
Advertisement

(JTA) — In a speech at the United Nations, Pope Francis praised the Iran nuclear deal and decried the persecution of minorities in the Middle East.

“The recent agreement reached on the nuclear question in a sensitive region of Asia and the Middle East is proof of the potential of political good will and of law, exercised with sincerity, patience and constancy,” Francis said Friday to the U.N. General Assembly.

“I express my hope that this agreement will be lasting and efficacious, and bring forth the desired fruits with the cooperation of all the parties involved.”

READ: Op-Ed: Why Pope Francis has given religion a good name again

Francis’ U.N. address, on the fourth day of his United States tour, was his first public reference to the sanctions relief for nuclear restrictions deal reached in July between Iran and six major powers. The Obama administration strongly defends the deal, saying it will keep Iran from becoming a nuclear weapons power. Israeli Prime Minister Benjamin Netanyahu, who opposes the deal, says it leaves Iran on the threshold of obtaining a nuclear weapon.

Francis during his U.S. trip has generally been seen as encouraging a liberal outlook, urging action to address man-made climate change, opposing capital punishment and calling for greater social equity and fettered capitalism in speeches to Congress and in appearances with President Barack Obama.

A range of Jewish groups have embraced his message, with the Reform movement, the American Jewish World Service and the Jewish Council for Public Affairs, among others, praising him for speaking out on poverty, climate change and the refugee crisis in Europe.

He has earned some praise from conservatives as well for broadsides against abortion and for calling for the preservation of traditional marriage.

In his U.N. address, Francis also spoke of the persecution by Islamist extremists in the Middle East of Christians and other minorities, as well as moderate of Muslims, saying:

“I must renew my repeated appeals regarding to the painful situation of the entire Middle East, North Africa and other African countries, where Christians, together with other cultural or ethnic groups, and even members of the majority religion who have no desire to be caught up in hatred and folly, have been forced to witness the destruction of their places of worship, their cultural and religious heritage, their houses and property, and have faced the alternative either of fleeing or of paying for their adhesion to good and to peace by their own lives, or by enslavement.”