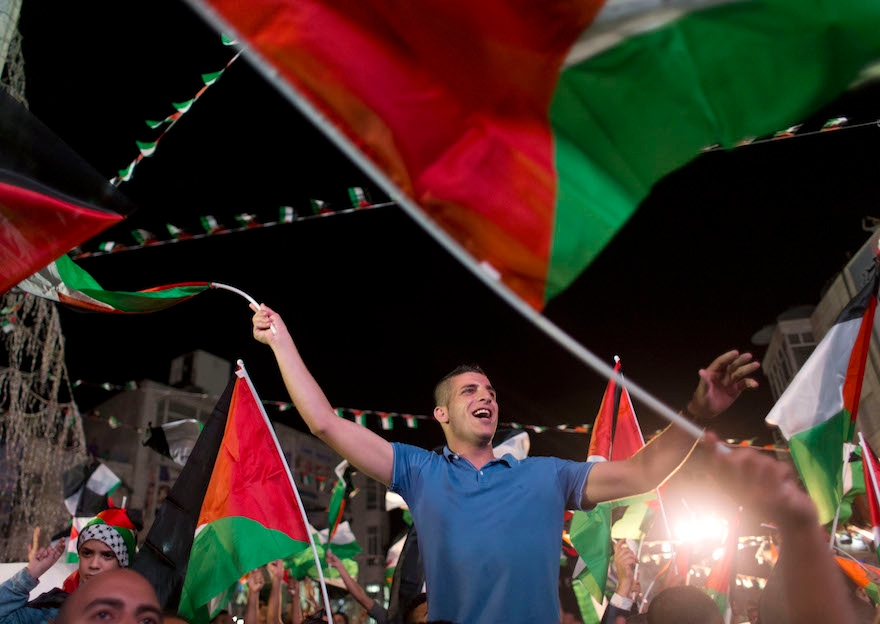 Palestinians sing and wave their national flags after a speech by Palestinian President Mahmoud Abbas at the U.N. General Assembly shown on TV in the West Bank city of Ramallah, Wednesday, Sept. 30, 2015. (AP Photo/Nasser Nasser)
Advertisement

NEW YORK (JTA) — The Palestinian flag was raised outside the United Nations headquarters in New York for the first time.

The ceremony on Wednesday afternoon was attended by diplomats in the U.N.’s Rose Garden shortly after Palestinian Authority President Mahmoud Abbas, in a speech to the U.N. General Assembly, criticized Israel and said that the Palestinians were no longer bound by the Oslo Accords.

On Thursday, the flag will be hung in a permanent location alongside U.N. member flags, CNN reported.

The General Assembly voted 119-8 on Sept. 10 to allow the Palestinian flag at headquarters. Israel and the United States were among the dissenters, along with Canada and Australia.

Abbas dedicated Wednesday’s ceremony to “the martyrs, the prisoners and the wounded, and to those who gave their lives while trying to raise this flag,” Al Jazeera reported. Hundreds of Palestinians gathered in Yasser Arafat Square in the West Bank city of Ramallah to watch a live broadcast of the ceremony on a large screen.

Mustafa Barghouti, a member of the Palestine Liberation Organization’s Central Council, told Al Jazeera that the flag raising was as “an important symbolic step.”

“In essence, it will honor the many Palestinians who were killed by Israel while trying to raise that flag in the occupied Palestinian territories,” he said.

Before the Sept. 10 vote, Samantha Power, the U.S. ambassador to the United Nations, told the General Assembly that “raising the Palestinian flag outside the U.N. headquarters is not an alternative to negotiations and will not bring [Israel and the Palestinians] closer to peace.”