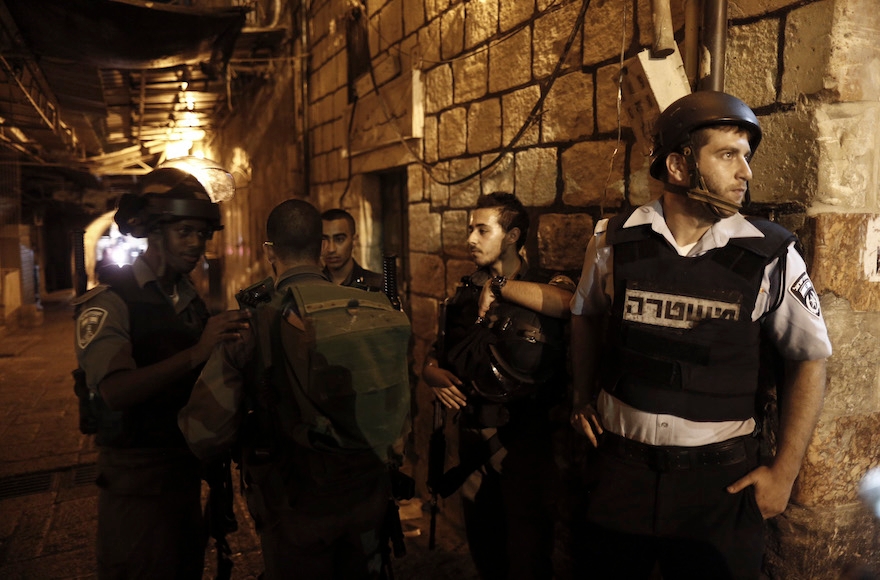 Israeli police standing near the scene where a stabbing attack took place in the Old City of Jerusalem on October 3, 2015. (Yonatan Sindel/Flash90)
Advertisement

JERUSALEM (JTA) — An Israeli teenager was stabbed by a Palestinian man outside Jerusalem’s Old City several hours after two Israeli men were killed in a similar attack nearby.

The 15-year-old victim was in moderate condition after being treated on the scene early Sunday morning by paramedics, according to initial reports. He was taken to the hospital with wounds to his chest and back.

The assailant reportedly fled the scene. A video posted online appeared to show him hundreds of feet away, on the tracks of Jerusalem’s light rail, where he was shot and killed by police officers.

Hamas media named the suspected stabber as Fadi Aloon, a resident of the eastern Jerusalem neighborhood of Issawiya. A post before the attack on what appeared to be Aloon’s Facebook page pledged martyrdom and asked God’s forgiveness for sins.

The stabbing attack that killed the two Israeli men took place on Saturday night, also in the Old City. An Israeli woman, the wife of the first man who was killed, and her 2-year-old son were injured.

The Palestinian assailant, 19, from the al-Bireh village near Ramallah in the West Bank, reportedly took a gun from one of the stabbed men and began shooting at Israeli security forces, who were alerted to the attack by the injured woman.

The assailant was shot and killed by Israeli security forces. 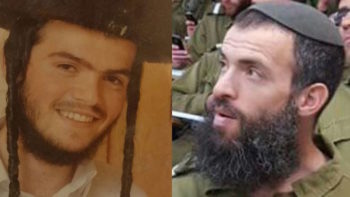 The Islamic Jihad terrorist organization claimed responsibility for the attack, saying that the attacker — identified as Muhannad Shafeq Halabi, a law student at Al-Quds University — was a member of its movement. Halabi posted a message on his Facebook page on Friday saying that the third intifada has begun.

The Fatah movement, which is led by Palestinian Authority President Mahmoud Abbas, tweeted an image of the message on Saturday, after the attack.

Hamas applauded what it called the “heroic operation” in a statement, saying: “We support and welcome any resistance activity that harms Israeli soldiers and settlers. Our people in the West Bank are ready to die, to sacrifice themselves to defend the Al-Aqsa Mosque.” 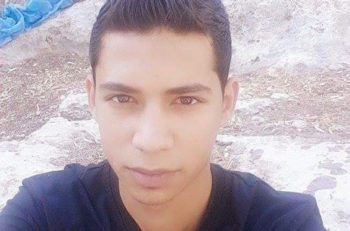 Muhannad Shafeq Halabi, 19, was identified as the assailant in the deadly stabbing attack of two Israeli men in Jerusalem’s Old City on Oct. 3, 2015. (Israel Police)

One of the dead men, identified as Aharon Bennett, 22, was the husband of the injured woman and baby, who were evacuated to Jerusalem hospitals where they each underwent surgery.

The second victim was Rabbi Nechamia Lavi, 41, a rabbi at the Ateret Cohanim Yeshiva in the Old City and a father of seven. The men were walking to the Western Wall through the Lions’ Gate when they were attacked.

The attack followed two days after an Israeli couple was shot dead by Palestinian assailants while driving in a car in the West Bank with their four young children, who survived the attack.

The Israel Police said they would continue to operate additional security patrols throughout Jerusalem, with an emphasis on the Old City, where there has been an increase in violence centered on the Temple Mount in recent weeks.

“Netanyahu lost control over the security of Israeli citizens and Jerusalem,” Herzog said in a statement posted on Facebook. “His government is showing weakness and a total failure in security and the national mission of protecting Jerusalem’s security.”

Security does not come from speeches, he added, alluding to Netanyahu’s speech Thursday before the United Nations General Assembly.