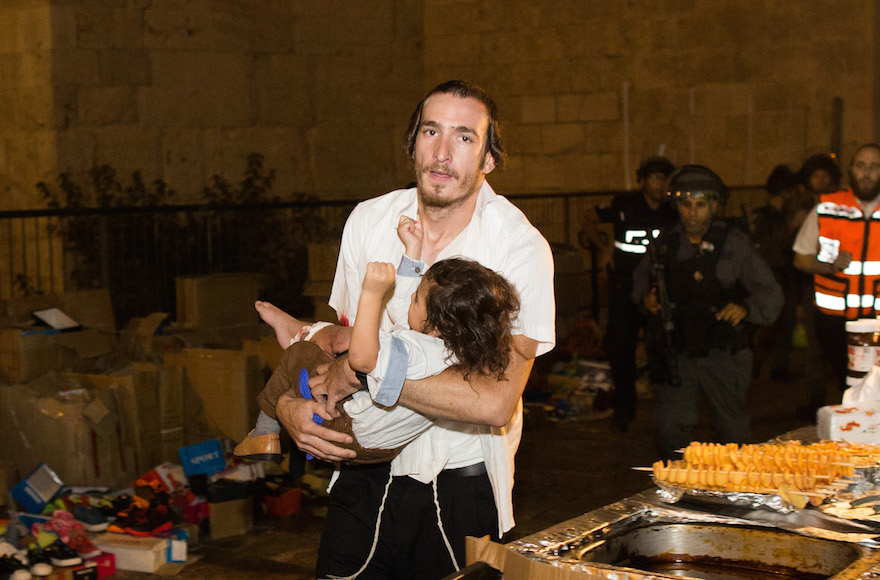 A Jewish man carrying a baby injured in a stabbing attack in the Old City of Jerusalem on October 3, 2015. (Yonatan Sindel/Flash90)
Advertisement

(JTA) — The U.S. State Department condemned the murder of two Israeli men in a stabbing attack by a Palestinian assailant in Jerusalem.

“The United States strongly condemns all acts of violence, including the ‎tragic stabbing in the Old City of Jerusalem today that left two victims dead and two injured,” State Department spokesman John Kirby said in a statement issued on Saturday in Washington D.C., that also called for “all perpetrators of violence to be swiftly brought to justice.”

“We are very concerned about mounting tensions in the West Bank and Jerusalem, including the Haram al Sharif/Temple Mount, and call on all sides to take affirmative steps to restore calm and avoid escalating the situation,” Kirby said.

I condemn the brutal terror attack that killed two #Israelis in #Jerusalem, call on all to stand firm against incitement, prevent escalation

He also said in a statement that he was “shocked that some find it appropriate to justify such attacks as ‘heroic,’ when they are not only appalling, but are also dangerous to both Palestinians and Israelis alike,” according to the Times of Israel.

Israeli President Reuven Rivlin said in a statement: “We are facing a difficult, daily, and ongoing struggle. We have always known that the struggle against terrorism demands determination and inner fortitude, and we will reach the murderers of the innocent, and those who send them to kill.”

He offered his “support to the security forces operating now across Jerusalem, Judea and Samaria, and the whole country, in their uncompromising work against the murderers and their dispatchers.” Judea and Samaria are the biblical names for areas of the West Bank.

“We must all work together to restore the sense of security to our citizens across the country,” Rivlin said.

The statements were made before a second stabbing attack in Jerusalem, of a 15-year-old boy.

Israeli Prime Minister Benjamin Netanyahu returned early Sunday morning from the United States, where he addressed the U.N. General Assembly and met with Secretary of State John Kerry. Netanyahu reportedly went from the airport to meetings at Israeli army headquarters in Tel Aviv with Defense Minister Moshe Yaalon and other security officials, including the head of the Shin Bet security agency.