For Doctors Without Borders strike, US declines to give itself Israel treatment 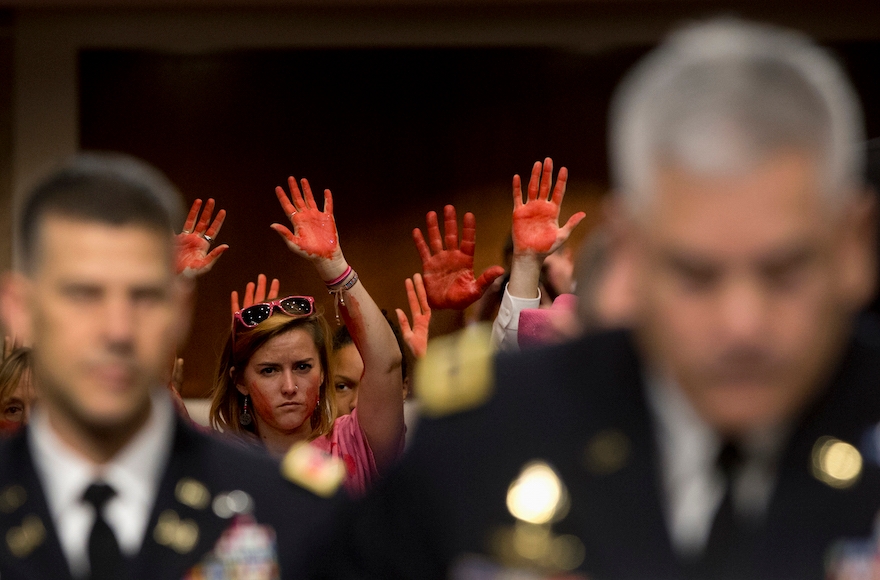 Members of CodePink protesting the deadly American attack on a hospital in northern Afghanistan as Gen. John Campbell, right, testifies before the Senate Armed Services Committee hearing on the Situation in Afghanistan in Washington, D.C., Oct. 6, 2015, . (Carolyn Kaster/AP Images)
Advertisement

One of the low points of last year’s Gaza war was Israel’s August 3 strike outside a United Nations school in the city of Rafah. The strike, meant to hit a military target according to the Israel Defense Forces, killed at least 10 people and injured dozens. It was the latest in a string of Israeli bombs to hit U.N. facilities.

As news of the bombing spread, the U.N. issued a swift condemnation, calling it a “moral outrage and criminal act.” So did the United States, condemning the shelling and admonishing Israel to adhere to higher standards of warfare.

“The United States is appalled by today’s disgraceful shelling outside an UNRWA school in Rafah sheltering some 3,000 displaced persons, in which 10 more Palestinian civilians were tragically killed,” State Department spokeswoman Jen Psaki said in a statement on the same day as the Rafah strike. “We once again stress that Israel do more to meet its own standards and avoid civilian casualties.”

Now, the U.S. finds itself in Israel’s place, fending off criticism after its forces bombed a Doctors Without Borders hospital in Afghanistan Saturday, killing 22. The U.N. issued a harsh condemnation that recalled its criticism of Israel.

“This event is utterly tragic, inexcusable, and possibly even criminal,” U.N. High Commissioner for Human Rights Zeid Ra’ad Al Hussein said in a statement Saturday. “International and Afghan military planners have an obligation to respect and protect civilians at all times, and medical facilities and personnel are the object of a special protection.”

The U.S. State Department, on the other hand, has not rushed to criticize its own country the way it did Israel. When the Associated Press’ Matt Lee pressed State Department spokesman Mark Toner on the similarities between the Rafah strike and Saturday’s, Toner did what Israel has done, stressing that any civilian casualties are unfortunate and unintentional, and that an investigation of the incident is underway.

“I think it’s safe to say that this attack, this bombing, was not intentional,” Toner said in response to Lee at a Monday press conference. “I can’t get into what may or may not have happened on the ground, whether the coordinates were known, whether they were acknowledged. It’s just too much speculation at this point. So you’ll hopefully give me a pass if we wait for the investigation to run its course.”

Further pushed by Lee, Toner would not call the hospital strike “appalling” or “disgraceful.”

It’s no shock that the U.S. would go easier on itself than on another country. But the apparent inconsistency in State Department statements speaks to what some call an unparalleled level of scrutiny of Israel. Israel, some critics say, receives far more of the world’s attention and ire than do other conflict zones where the fighting is as bad or worse.

In an article published near the midpoint of last year’s Gaza war, Atlantic correspondent Jeffrey Goldberg noted that the New York Times had devoted far more recent coverage to Israel and Gaza than to Syria — even though Syria’s death toll was far larger. Goldberg attributed the disparity to the access journalists had to the Gaza conflict, as well as to what he called disproportionate interest in Israel and Jews.

“As far as I can tell, the Times, as of this writing, has not addressed this most recent round of Syria carnage in an even semi-comprehensive way,” he wrote. “It goes without saying that continuing violence in Libya, Egypt, Nigeria, Yemen, and so on, has not received much attention from the Times in recent days.”

A couple weeks later, the Economist quantified that interest. In two graphs charting Google searches and death tolls for various conflicts, the magazine showed that Israel was Googled about 10 times more than Syria in early July, although the Gaza death toll was a fraction of Syria’s.

But if the U.S. military is taking its cues from the IDF, Israel’s Foreign Ministry isn’t playing the State Department’s role. Asked whether it had any reaction to Saturday’s U.S. strike on the hospital, a spokesman told JTA the ministry had no comment.