WATCH: 2 videos of the violence in Israel 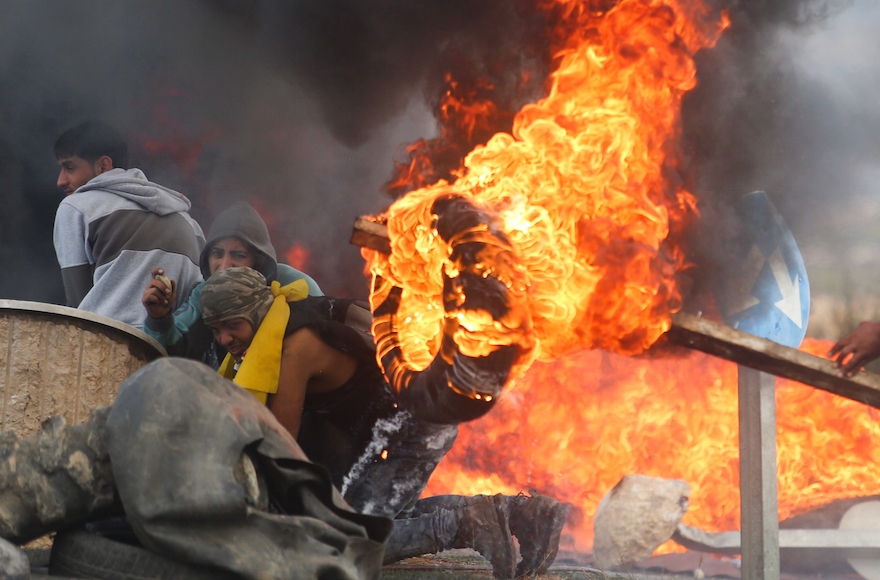 Palestinian men burning tires during a clash with Israeli forces near the West Bank city of Ramallah, Oct. 9, 2015. (Flash90)
Advertisement

The violence in Israel continued on Friday with multiple stabbings and shootings. Hamas’ chief in the Gaza Strip declared a third intifada, and some were inclined to believe him.

In the morning, an Israeli Jew stabbed four Arabs in an apparent revenge attack for Palestinian terrorism. The victims suffered light to serious injuries.

Around noon, a Palestinian man stabbed an Israeli police officer stationed in the West Bank settlement of Kiryat Arba and was killed in the process. Shortly thereafter, a Palestinian teenager stabbed a 16-year-old Israeli in Jerusalem, inflicting minor injuries.

In the afternoon, five Palestinians were killed and 35 were wounded at a riot near the Israel-Gaza border. Reports say that when Palestinian protestors hurled burning tires and rocks at Israeli border police, the Israeli officers opened fire.

Later, the wife and three children of Yossi Dagan, the head of the Samaria West Bank settlements, were injured when Palestinians hurled stones at their car as they drove in the West Bank.

A Palestinian woman in the northern Israeli city of Afula was shot and moderately injured by Israeli officers after refusing to put down a knife. The woman reportedly attempted to stab a uniformed Israeli soldier.

This video captures the standoff between the woman with the knife and Israeli officers.

This video, also released on Friday, is a compilation released by the Jerusalem police department. It is highly edited and depicts the aftermath of a series of unspecified stabbings.