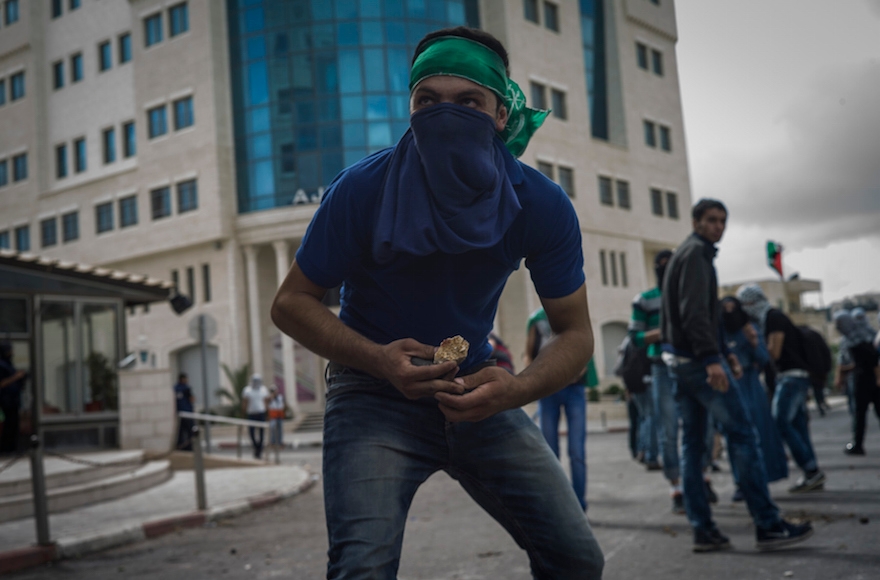 JERUSALEM (JTA) – Israelis have become accustomed to dismal news in the past few weeks – mornings and evenings punctuated by stabbings, car attacks and rock throwing.

The cycle of random violence has left dozens of Israelis and Palestinians dead, and many fearing the worst: The start of a third intifada, or armed Palestinian uprising, that could claim hundreds more lives.

But since the second intifada started in 2000, fears of a repeat have proved unfounded. Conditions in Israel and the Palestinian territories have changed since that time, and short bursts of low-level violence are the new normal.

“It’s a matter of days until this stops,” said Nitzan Nuriel, the former head of the prime minister’s Counter-Terrorism Bureau. “This has no goal. It will be forgotten. The reality is we have waves of terror. It doesn’t matter what the reason is.”

Israelis have been bracing for a third intifada ever since the second one ebbed to a close in 2005. Waves of terror have risen and fallen, along with concerns that the region is on the verge of another conflagration.

Most recently, a string of Palestinian attacks in late 2014, including the murder of four Orthodox Jewish men, including three rabbis, and a Druze police officer at a Jerusalem synagogue, sparked talk of a third intifada. But those clashes died out after several weeks. Another rash of attacks came and went two years ago.

Now, after two weeks of near-daily attacks, some Israelis and Palestinians are already calling this string the third intifada. But during the past 15 years, Israel has created safeguards to keep Palestinian violence in check.

READ: At least 3 Israelis killed in terror wave throughout country

“Every night we have actions to detain people who are involved in terrorist activities,” Israel Defense Forces spokesman Peter Lerner told JTA. “We have operational access at any given time to any place.”

After hitting a peak in 2002, attacks on Israelis waned the following year when Israel completed the first part of a security barrier near its pre-1967 border with the West Bank. Part fence and wall, the barrier has proved controversial. Its route cuts into the West Bank at points in what critics call an Israeli land grab. And the restrictions on Palestinian movement imposed by the barrier, as well as the fence around Gaza, have led some to call Gaza an open-air prison.

Israel’s security barrier winding through the West Bank has proven controversial since it first started being built in the early 2000s. (Nati Shohat/Flash90)

Still, the barrier coincided with a sharp decrease in Israeli deaths from terrorism. Terrorists have infiltrated it repeatedly, but successful Palestinian terror attacks dropped 90 percent between 2002 and 2006. Militants attacking Israel from Gaza now shoot missiles over the barrier or dig tunnels under it.

The current wave of violence has mostly involved attacks in the shadow of the security barrier – either in the West Bank or in Jerusalem. Both are Palestinian population centers with easy access either to Jewish communities. A handful of stabbings have taken place in central Israel, perpetrated by Palestinians who were able to sneak across the barrier.

The unorganized, “lone wolf” attacks occurring across Israel have created an atmosphere of insecurity and tension, even as the attacks have been relatively small in scale. There’s a feeling, some say, that an attack could happen anywhere at any time.

“No one is in charge to say tomorrow we stop the attacks,” said Shimon Grossman, a medic with the ZAKA paramedical organization who is responding to the ongoing violence just as she did in the second intifada. “Whoever wants to be a shaheed [‘martyr’] takes a knife and stabs people.

“It’s very scary for people because they don’t know when the end will be, what will stop it. Last time people knew to stay away from buses. Now you don’t know who to be afraid of.”

Another significant obstacle to a third intifada has been the West Bank Palestinians themselves, who have worked with Israel for eight years to thwart terror attacks. In 2007, Hamas seized full control of the Gaza Strip, violently ousting the moderate Fatah party, which controls the West Bank’s Palestinian Authority.

Since that takeover, the P.A. and Israel have viewed Hamas as a shared enemy and coordinated on security operations aimed at discovering and arresting Hamas terror cells.

Israeli Prime Minister Benjamin Netanyahu has accused P.A. President Mahmoud Abbas of inciting the ongoing violence. But Abbas has maintained security coordination with Israel through the clashes and has a history of opposing violence. Nuriel said that while Abbas is not to blame for the attacks, he stands to benefit from them.

But a majority of Palestinians are fed up with Abbas and oppose his stance on nonviolence. Rather, Palestinian society as a whole appears to support violence against Israelis. A poll by the Palestinian Center for Policy and Survey research last week found that 57 percent of Palestinians support a return to an armed intifada, an increase of 8 percent from earlier this year. Half believe the P.A. has a mandate to stop security coordination with Israel, and two-thirds want Abbas to resign.

“This is an explosion of a whole generation in the face of the occupation,” said Shawan Jabareen, director of Al-Haq, a Palestinian civil rights group. “No one can say when it will stop unless people get hope that things will change. But if they see there’s no hope, I don’t know which way it will take.”

Even if the attacks continue, according to former Israeli National Security Adviser Yaakov Amidror, Israel will retain the upper hand. The best course of action, he wrote in a position paper this week, is to maintain current security operations and be cautious in using force.

“Now we no longer have to prove anything,” Amidror wrote in the paper for the Begin Sadat Center for Security Studies. “Israel is a strong, sovereign state, and as such it must use its force prudently, only when its results have proven benefits and only as a last resort.”

(CORRECTION: An earlier version of this article incorrectly stated that the four Jewish men murdered last year at a Jerusalem synagogue were rabbis. Only three of them were.)