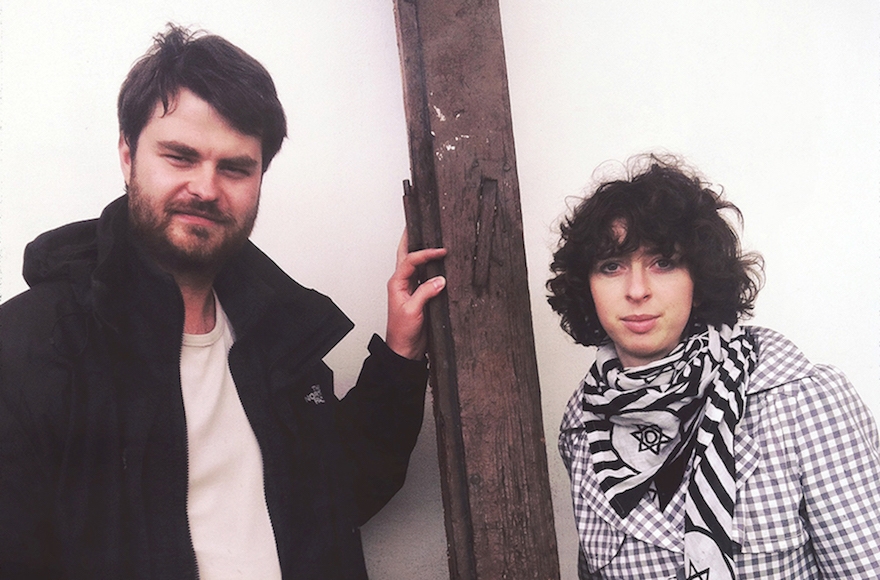 Helena Czernek, right, and Aleksander Prugar with the remains of a mezuzah they will use to create a new piece of Judaica. (Katarzyna Markusz)
Advertisement

WARSAW, Poland (JTA) — When Helena Czernek and Aleksander Prugar opened their email inbox several weeks ago, they found a message from a customer who had bought one of their bronze mezuzahs as an engagement gift.

“The connection my family now has with the past was so overwhelming that it made my wife cry,” the customer wrote. “It will now be proudly displayed in our home and I will make sure every visitor knows the story. This bronze will truly be eternal.”

Czernek and Prugar are the founders of Mi Polin, a Polish design studio specializing in the production of contemporary Judaica. For their Mezuzah From This House series, the pair traveled across Poland searching for traces of mezuzahs in the door frames of homes where Jews once lived. From the depressions left in the frame, Czernek and Prugar produce a plaster cast they then use to create a bronze mezuzah engraved with the traditional Hebrew letter shin and the address where the original mezuzah once hung.

“We decided to use bronze because it is known from antiquity,” Prugar told JTA. “It is completely resistant to external conditions, does not rust. Without any problems our mezuzah will survive 1,000 years. Our casts are eternal.” 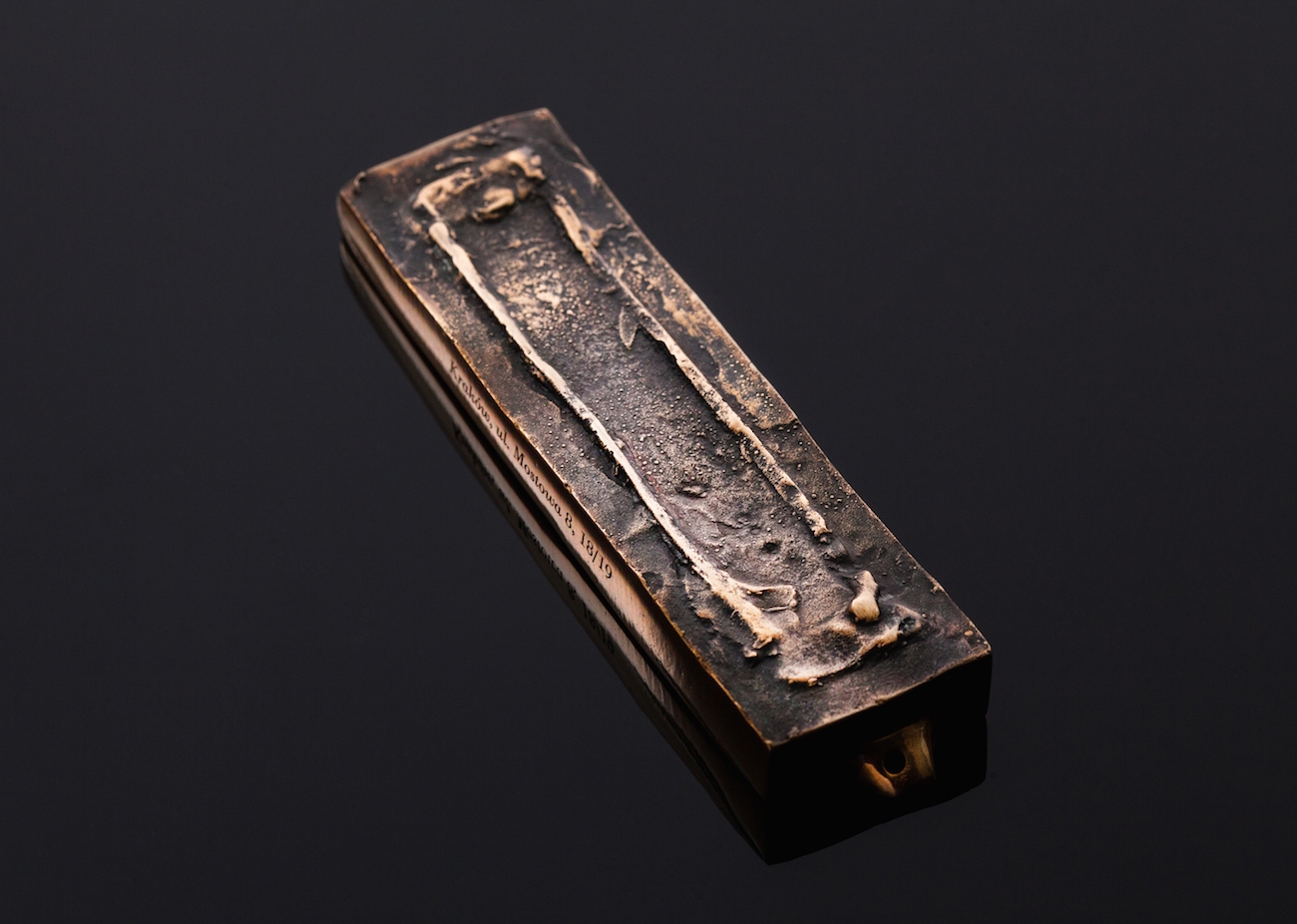 A bronze mezuzah made by Mi Polin from a trace of an old Polish mezuzah. (Courtesy of Mi Polin)

Last year, Czernek and Prugar traveled to Sokolow Podlaski, a small town about 60 miles east of Warsaw. They stopped by the building at 4 Wilczynskiego St., which housed a kosher butcher shop before the Holocaust. The old door frame wasn’t there anymore, but amazingly, Czernek and Prugar found a door from the house lying nearby in a dumpster that had a trace of a mezuzah.

Orie Niedzviecki, a Canadian lawyer whose grandparents came from Sokolow Podlaski, bought two mezuzahs made from depressions found there by Czernek and Prugar. One he gave to his parents, the other to a niece who had just moved to Israel.

“The idea that this mezuzah is now in Israel along with some members of my family, and hopefully myself soon, provides some link to the past as the Jewish people move forward to its inevitable future as a free nation in its own homeland,” Niedzviecki said.

Though some 3 million Jews lived in Poland prior to the Holocaust, most Poles do not realize that the marks still remaining on door posts were likely the spots where Jews had hung their mezuzahs. When the doors are replaced, one of the last traces of the Jewish inhabitants of those homes often disappears as well. 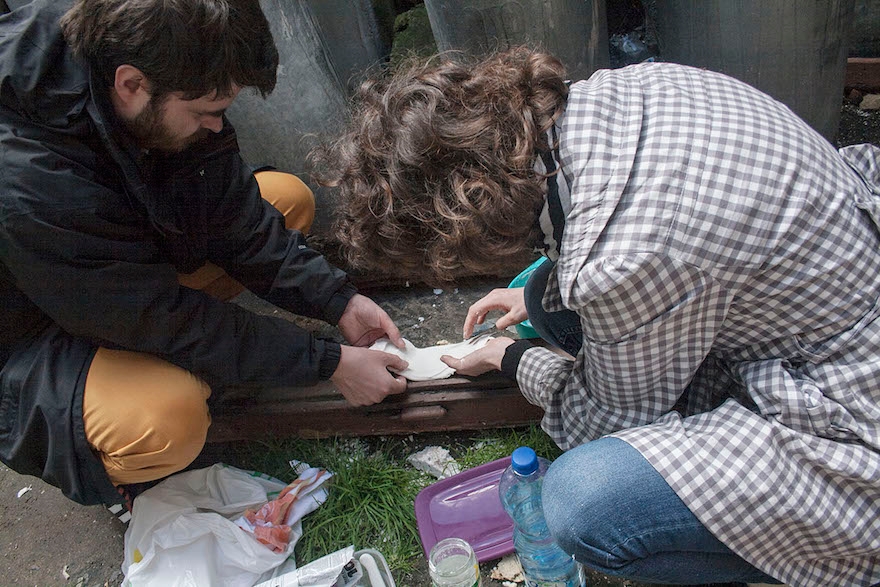 Helena Czernek and Aleksander Prugar making a plaster cast from the impression left by a mezuzah. (Katarzyna Markusz)

In the town of Ostroleka, Czernek and Prugar last year found a home with traces of 10 mezuzahs. During a renovation, the owners had stripped them out and burned them, not understanding their significance.

“In contrast to synagogues and cemeteries, mezuzah traces are the least visible part of the material legacy of more than 3 million Jews who once lived in Poland,” said Krzysztof Bielawski, who runs the Virtual Shtetl project at the Museum of the History of Polish Jews in Warsaw. “Few people are turning attention to them. Helena’s and Alexander’s design is not only a documentation of the traces, it shows that each mezuzah is linked to the history of specific individuals.”

Mi Polin has also produced a crystal mezuzah for the blind, with one of the Hebrew names for God written in braille. They are also working on a spice box used in the Sabbath-ending service Havdalah that is based on the shape of the Tower of David in Jerusalem.

For each cast they make, Czernek and Prugar send information about it to a local museum or municipal office to educate local residents about the Jewish legacy in their particular town and to increase the likelihood that more mezuzah traces can be found. They also organize training workshops to teach tour guides how to locate former Jewish sites around Poland.

“We are working so that each of our products is not only a thing,” Prugar said. “We want to give some content, message, special meaning for each of them. Judaism is full of different meanings. It is tangible through our items.”