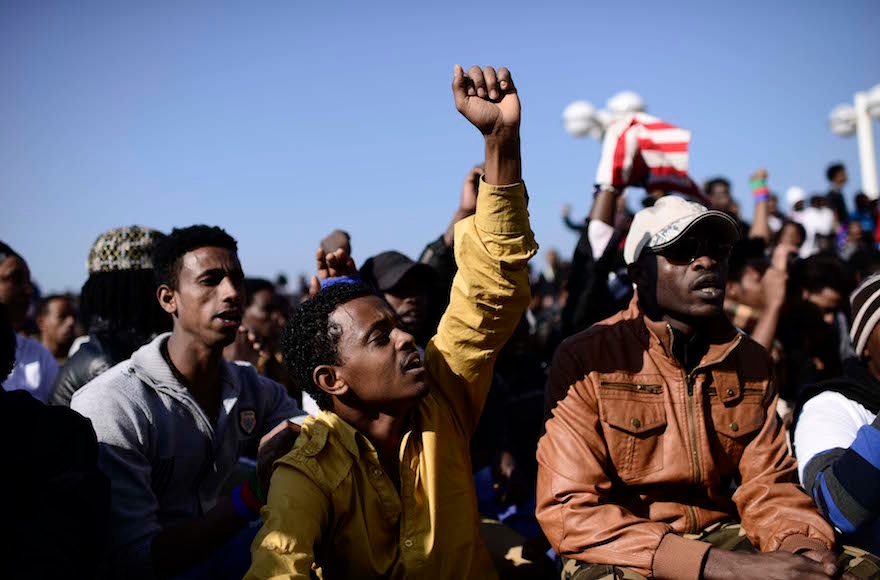 TEL AVIV (JTA) — In the days since an Eritrean migrant was shot to death by an Israeli security guard and then beaten by a mob at Beersheba’s central bus station, a fellow migrant named Awat Ashever has insisted to other Eritreans that the killing was just a terrible mistake.

It’s an uphill battle, as some of the 45,000 African migrants in Israel see the incident as evidence of discrimination they say has existed for years. The episode has also brought home the dangers of the terror wave sweeping the country where they have sought safe haven.

The death of Haftom Zarhum, 29, followed a terrorist attack at the station that killed an Israeli and wounded 11. A guard mistook Zarhum for the terrorist. Several Israelis — including a soldier — then kicked and beat Zarhum amid chants of “Break his head.” On Twitter, Defense Minister Moshe Yaalon called the incident a lynch.

But Zarhum, who worked in a plant nursery in the southern village of Ein Habesor, had come to Beersheba only to extend his conditional release visa, which gives Eritreans and Sudanese the right to live in Israel with restrictions.

READ: As Europe takes in migrants, Israel tries to keep them out

“People are upset about what happened in Beersheba,” Ashever told JTA. “It’s hard to tell people it was unintentional. The state of Israel doesn’t accept you … so people say it was intentional.”

Despite condemnation from Israeli politicians, including Prime Minister Benjamin Netanyahu, some migrants see the killing as part of a larger societal problem.

“Politicians, for years they were making incitement against refugees,” said Ghebrehiwot Tekle, 35, who came to Israel from Eritrea in 2007 and now lives in Tel Aviv. “It influenced some people — they took the law [into] their hands. [Zarhum] didn’t have anything in his hands. He didn’t have any gun, any knife.”

Most migrants in Israel hail from Eritrea and Sudan and insist that they are seeking asylum from brutal dictatorships. The Israeli government, however, labels them economic migrants who have come to the country in search of work. With rare exceptions, it has not recognized them as refugees or given them work visas.

In 2012, Israel built a border fence with Egypt to block illegal migration, and in 2013 began detaining thousands of migrants in Holot, a center next to a prison on the Egyptian border.

Migrants have decried these measures, along with harsh rhetoric from Israeli politicians, as mistreatment. On Monday, a crowd gathered outside Holot to protest Zarhum’s death.

But Jeremiah Sunday Diario, a Nigerian pastor who has ministered to migrants in Israel since 2005, saw the incident as isolated. Zarhum was killed, the pastor said, because he was thought to be a terrorist, not because he was Eritrean.

“Any person in that position would do the same thing, when someone comes to kill you,” Diario said.

The migrants have also had to deal with frequent danger in a country where they have sought refuge. Since Tekle arrived eight years ago, Israel has fought three wars in Gaza and suffered periodic waves of terror attacks. The present wave has seen nine Israelis die in dozens of attacks since the beginning of October.

Ashever said that at first, he tried not to get caught up in the tension over the attacks, but found himself facing the same dangers as his Israeli neighbors.

“If you’re in Israel, it affects you,” he said. “But we didn’t think it would affect us. I don’t deal with these things. It’s not my problem. I just came because of the situation in Eritrea.”

Diario has encouraged migrants to take responsibility for their own safety. In the event of a terror attack, he says, he tells migrants to walk fast — but not run, to avoid being misidentified as an attacker trying to escape.

Before Ashever arrived, he had a vague awareness of the Middle East conflict. But after seven years of attacks and given the government’s hard-line stance on migrants, he says he’s come to expect difficulty in Israel.

“I go from problem to problem,” he said. “My life is like this.”