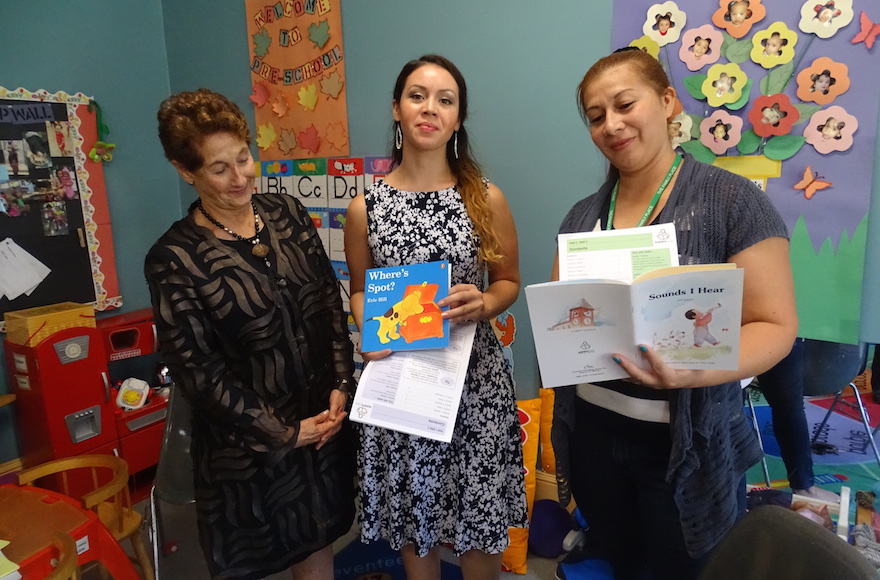 From left: Linda Frank, chair of HIPPY USA's trustees, and home visitors Sonia Sorto and Idis Argueta displaying some of the books and matching curricula given free to families in the HIPPY program. (Suzanne Pollak)
Advertisement

WASHINGTON (Washington Jewish Week via JTA) — Idis Arugeta used to come home from a long day of work and stick her toddler in front of the TV. But she said an Israeli-created home visitation program has changed the way she parents.

Now Arugeta said she sets aside one-on-one time to do things like read with her daughter — and it has paid off.

Her daughter has become “the best student,” Arugeta reported. “She knows everything.”

HIPPY, or Home Instruction for Parents of Preschool Youngsters, is designed to help low-income parents prepare their 3- to 5-year-old children to start school. Parents receive a weekly curriculum. They are given books on a schedule — every week or every other week — including a new book that teaches them how to become their child’s first teacher.

The program was started in Israel in 1969 to help immigrants from North Africa and the Middle East prepare for life in their new country. HIPPY, which still operates in its native country, came to the United States in 1980 via the National Council for Jewish Women’s Research Institute for Innovation in Education at the Hebrew University of Jerusalem.

Today there are 140 HIPPY sites in 23 states and the District of Columbia.

Locally, HIPPY partners with the Fairfax County public schools in Virginia, Enterprise Community Partners in Baltimore, and the Perry School Community Services Center and the Family Place, both in the District of Columbia.

More than 125 parents participate in HIPPY at the Family Place. The majority are Spanish speakers with little formal education in their native country, according to Haley Wiggins, executive director of the nonprofit.

“Lots of parents say, ‘I send my child to school to learn,’” Wiggins said.

HIPPY works to change that mindset, she said. Parents are shown how to make their children lifelong, eager students.

“We really work with the parents. We empower them to be role models,” Wiggins said.

While the curriculum emphasizes reading and math, there is also a week dedicated to germs and why showering and teeth brushing are important.

A typical HIPPY session happens in the parent’s home, though libraries and other public places are options as well. The home visitor explains the week’s curriculum and shows the parent what to do. During the hourlong visit, the home visitor also tells the parent about other services available. Many clients, said Wiggins, have no idea how many programs exist on the local and federal level to help people deal with the challenges of poverty.

HIPPY also sponsors monthly meetings for parents to get to know each other while learning. Some topics during recent meetings have included bullying, tax preparation and domestic violence prevention. The program is provided free to the families, with most of the funding coming from the federal government’s Maternal, Infant and Early Childhood Home Visiting Program. 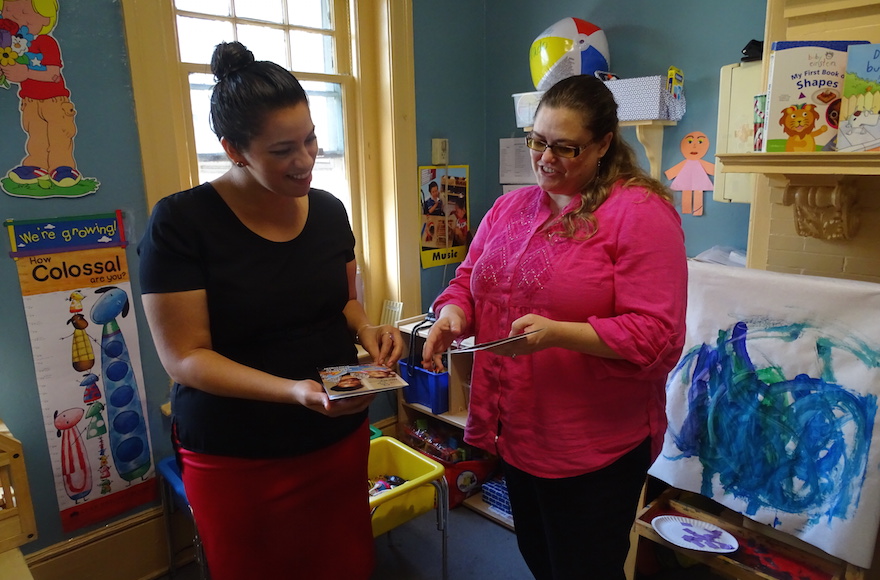 Linda Frank, chair of HIPPY USA’s board of trustees, spoke about the program like a proud parent.

“It really has become a passion for me,” she said.

To her, HIPPY is about much more than handing out books. Frank said parents learn the importance of being in contact with teachers, attending back-to-school nights and staying engaged with their child’s education.

Other skills that are taught to parents include how to get children to pay attention, take turns and sit quietly, she said.