Amid the violence in Israel, Arab-Israeli newscaster Lucy Aharish keeps on smiling 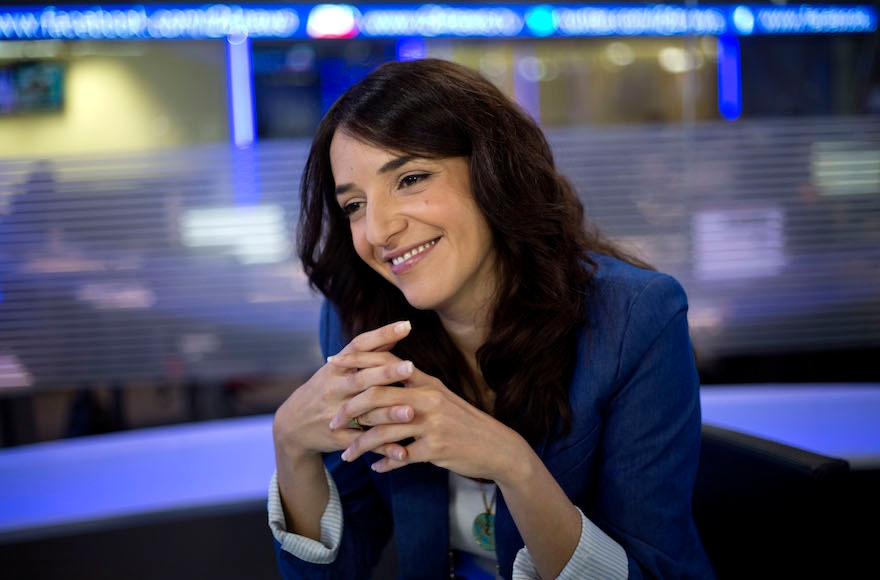 TEL AVIV (JTA) – Lucy Aharish never wanted to be a political symbol. The 34-year-old Arab-Israeli news presenter and television host didn’t even want to be a journalist. When she graduated from high school in the hard-knock southern Israeli town of Dimona, her plan was to be an actress.

But her father insisted she earn a degree in something practical, she told The Times of Israel in April. So she paired theater studies with a political science degree at Hebrew University, and then put in an additional two years studying journalism at the Koteret school in Tel Aviv.

She has now been on the Israeli news for eight years, and her face and accent-free Hebrew are familiar to Israelis. But what exactly she symbolizes is hotly contested – as became clear last week when she went on a tirade against Arab-Israeli leadership and culture on air amid a surge in Palestinian violence and an Israeli crackdown.

“Arab leaders … are adding fire to the environment and instead of understanding that once it will calm down, we will be the ones to pay the price,” she said on Channel 2. “The second intifada took such a heavy price from Israeli-Arabs and the Palestinians. We are not learning from the mistakes.”

Aharish got her start in 2007 on Israel’s Channel 10, making history as the nation’s first Arab news presenter before putting in serious time in the West Bank as the channel’s Palestinian affairs reporter. Today she hosts the daily English edition of i24news and a Hebrew-language morning show on Channel 2. She remains one of the few Arab-Israelis on the news.

Known among Jewish-Israelis as a rare moderate Arab voice, Aharish takes pride in the Jewish state and has been willing to openly criticize her fellow Arab-Israelis.

“The problem with the Arab minority is that it sees itself as a victim,” she told the Washington Post in April, shortly before she made history by joining 13 other Israelis to light a torch at the nation’s pomp-and-circumstance-heavy Independence Day ceremony. “Yes, there is racism against Arabs in Israel; yes, the Arabs do not get their entire rights. But I am not a victim of Israel; I am a human being and a citizen.”

Last week, as Israel was just starting to reel from the still-cresting wave of stabbings that has pushed the Palestinian-Israeli conflict to a gruesomely intimate new level, Aharish went on her now-famous tirade. Defenders of Israel quickly shared the video all over social media; it was viewed more than a million times.

“Even if the status quo on the Temple Mount has been broken, does that allow someone to go and murder someone else because of a sacred place?” she said. “What God are they speaking of? That allows for children to go out and murder innocent people? What woman puts on a hijab and prays to God, takes a knife out and tries to stab innocent people? I don’t understand it and I don’t justify it in any way.”

Huge numbers of Jewish-Israelis hailed Aharish as a clear voice of reason amid a din of blindness and bigotry. But others, on the Jewish and Arab left, called her a traitor to her people, accused her of a Stockholm syndrome-like relationship with her oppressors and mocked the mainstream Israeli response.

The story leaped beyond Israel, too: Dozens of news outlets reported on Aharish’s remarks, and within hours she had been booked for a one-on-one interview on air with CNN about her views.

Aharish, who speaks fluent English, has since stopped doing interviews. She originally agreed to speak to JTA for this story, and then changed her mind. But she has explained where she’s coming from in the past.

“Today, when people ask me ‘What are you?,’ I say that I am Israeli,” she told The Times of Israel in the April interview. “I’m not ashamed of my Israeliness. Then I’m a woman, and then I’m an Arab Muslim. That’s the order: Israeli, woman, Arab Muslim.”

During a previous violent peak 10 months earlier, she was even more eager to shrug off labels and draw a circle around her Israeli identity. It was the height of Israel’s 2014 war in the Gaza Strip. The Israeli army was pummeling Palestinians in Rafah and Gaza City, and Palestinian rocket fire was sending Israelis racing to bomb shelters in Ashdod and Tel Aviv.

As the current violence starkly shows, Aharish’s vision of an inclusive Israeliness is not winning out. She acknowledged as much in her interview last week with CNN.

“This time it’s different,” she said. “People are afraid in the streets of Israel … we are killing one another. We are killing ourselves. When you have a vacuum you have terror, and you are giving the stage to extremists from both sides.”

Aharish has signaled that she may not remain the face of Israeli coexistence forever. Despite her earlier dreams of an acting career and her current success at the TV desk, Aharish told The Times of Israel that she imagines her future abroad.

“I see myself managing a small cafe in Tuscany, which I will live next door to,” she said. “The camera never interested me as my life’s mission. Giving lectures, consulting, sure. But I’m more interested in what goes on behind the scenes. The camera is just a bonus.”