Purported ISIS video threatens to wipe out Jews, in Hebrew 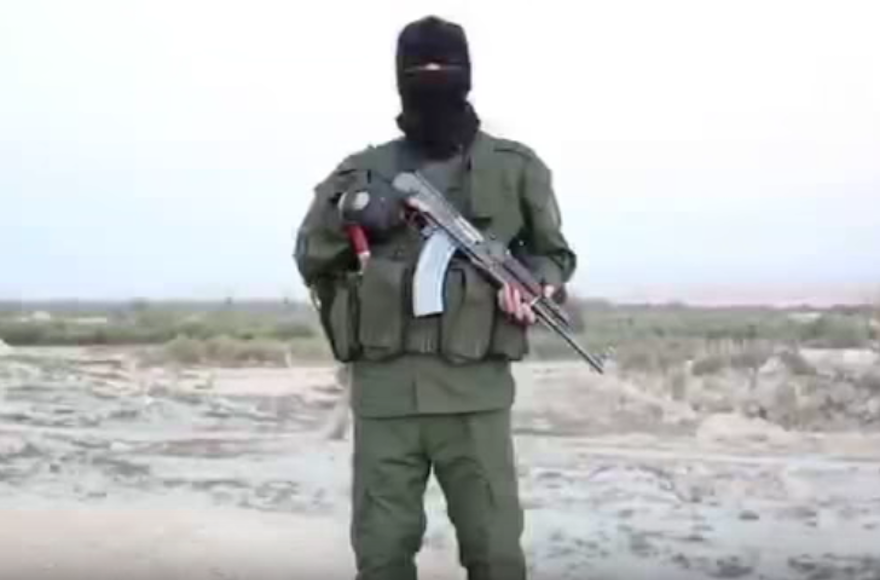 A militant appearing to promise to eradicate the Jews from Israel in a video that has been circulated online, Oct. 23, 2015. (YouTube)
Advertisement

(JTA) — Israeli media circulated an online video that features the symbol of the Islamic State terror group and an armed militant, as well as vocal threats in Hebrew aimed at Jewish-Israelis.

The video, which surfaced online earlier this week, was described by some media as the Islamic State’s first message in Hebrew, but Army Radio reported Friday that its authenticity could not be immediately confirmed.

The militant seen in the video is wearing a black balaclava that obscures his entire face, including his mouth, except for the bridge of his nose and his eyes. The video’s soundtrack consists of a man’s voice speaking colloquial and fluent Hebrew with a slight foreign accent and some minor grammatical errors, laced with Arabic religious expressions.

The Arabic spoken in the video is pronounced with guttural sounds absent from the Hebrew-language segments.

As the man faces the camera wearing a combat vest and strapping what appears to be an AK-47 assault rifle, the voice is heard saying: “This is a message to all the Jews, who are the Muslims’ No. 1 enemy.”

Soon, the voice promises, “not a single Jew will be left in Jerusalem or across Israel and we will continue until we eradicate this disease from the world.” The voice does not name the Islamic State but does contain boasts about “our conquests in Syria and Iraq.” The voice urges Israelis “to think for just a few seconds what will happen when we come from all over the world to slaughter you.”

It adds: “We see your crimes every day, and we will settle scores,” before the man pulls out a knife from his vest and cites a verse from the Koran promising victory to all Muslims.

According to Ynet, in recent months several dozen Arab-Israelis have joined the Islamic State, with at least five dying in combat in Syria.