Once a dream, paid parental leave now a reality at 100 Jewish groups — and counting 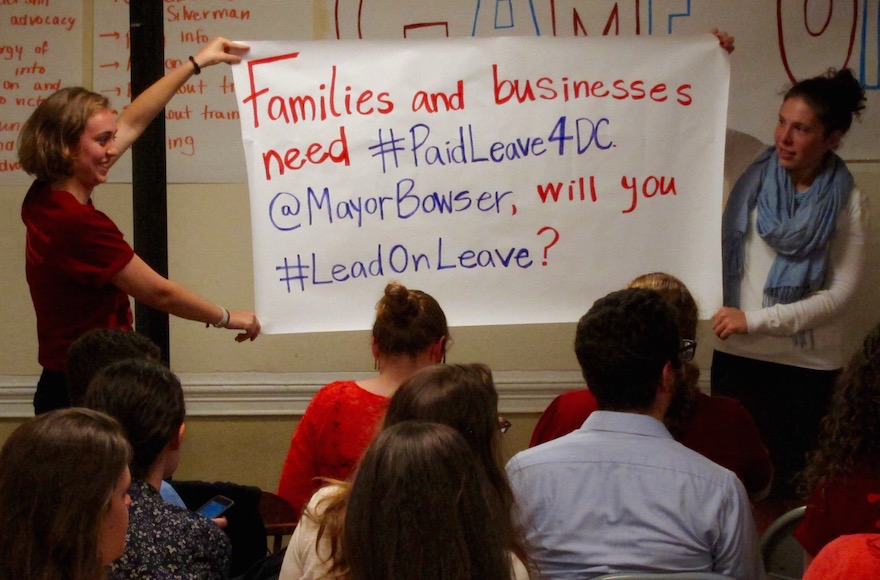 Jews United for Justice offers paid paternity leave for its employees — and is also a lead partner in the push to implement paid leave legislation in Washington, D.C. (Anya van Wagtendonk)
Advertisement

NEW YORK (JTA) — It’s a Sunday in 2010, and in one hand I’m texting with a colleague about work. In the other I hold a pee stick, waiting for the results of my home pregnancy test to appear. As I press send, I realize that parenthood isn’t the only new territory I’ll need to learn to navigate. As a writer, editor and strategist, I’ve been pushing for years for work-life balance. But this was no longer a social justice issue — it just got personal.

While my husband and I were able to spend our new baby’s first 12 weeks together before I went back to work full-time, nearly one in four mothers returns to work within two weeks of giving birth, according to a report in In These Times, a progressive monthly magazine.

We were fortunate enough to be able to afford the unpaid time together. After all, when I first started working in the Jewish world, smoking was still allowed in individual offices, phones weren’t smart and paid parental leave was a pipe dream for most Jewish professionals.

Now it’s not. That’s thanks, in large part, to the strategic efforts of Advancing Women Professionals and the Jewish Community, or AWP, and its relentless powerhouse, Shifra Bronznick, the founder and president of AWP and co-author, with Didi Goldenhar and Marty Linsky, of “Leveling the Playing Field.”

On Oct. 28, AWP will bring together more than 200 leaders from the Jewish community for “Better Work, Better Life: Celebrate the 100,” honoring the first 100 organizations in the American Jewish landscape to offer paid family leave and/or workplace flexibility.

The list of Jewish organizations providing these benefits is long, diverse and growing. Among the 100 are the Orthodox Union, the Central Conference of American Rabbis, the American Jewish World Service and the Jewish Theological Seminary. Places where I’ve spent the bulk of my own professional life are also on the list: Bend the Arc, the National Council of Jewish Women and the Forward Association.

That’s pretty remarkable considering that when AWP’s “Better Work, Better Life” campaign launched in 2009, most of the 100 being celebrated for their policies didn’t offer any paid parental leave. By spring 2014, there were 82 organizations on the list, and on Oct. 7, the Jewish Theological Seminary approved a new paid leave policy, bringing the number to AWP’s target of 100.

READ: Women rabbis at the forefront of pioneering prayer communities

“Jewish organizational leaders used to espouse the values of family, community, continuity and volunteerism – yet inflexible workplace policies implied that their ideal professional had no personal responsibilities or commitments,” Bronznick told me in a conversation that unfolded over phone and email.

“Taking away people’s salaries when they were having children and were at a stressful and financially vulnerable period in their lives is an example of the paradox between a community that lauded Jewish continuity, yet did not offer paid leave because they ‘could not afford it,'” she said.

Over time, however, the Jewish community has embraced paid leave.

Beyond the Jewish community, many families across the country flail in the gulf between what the federal government requires and what they need. The Family and Medical Leave Act of 1993 allows full-time workers to take 12 weeks of job-protected unpaid leave to care for a new baby (by birth or adoption) or a seriously ill family member.

But it doesn’t apply to everyone. Not freelancers. Not contract workers. Not employees at small companies. Not new employees. In fact, FMLA covers fewer than 60 percent of American workers.

States have begun to fill the gap by passing their own paid leave legislation: California (2002), New Jersey (2008) and Rhode Island (2013), along with some cities. Companies are stepping up, too, especially in the tech sector, with Twitter, Facebook, Netflix, Reddit, Microsoft and Adobe now offering drool-worthy paid-leave policies.

“We’re in a time of unprecedented attention,” said Vicki Shabo, vice president at the National Partnership for Women & Families, a nonpartisan, nonprofit advocacy group. “It feels like the time is right to be having an animated conversation about how we’re going to address the needs of working families.”

In recent years, paid leave has gained unprecedented ground — it’s (finally!) emerging as a presidential campaign issue. With nearly half of women in the workforce, mothers are either the sole or primary source of income for the family in 40 percent of households with children, according to the Pew Research Center. That’s up from 11 percent in 1960.

“We watch ‘Modern Family’ on television, but we’re still playing by ‘Leave It to Beaver’ rules,” U.S. Labor Secretary Thomas Perez said in a kickoff video for the national “Lead on Leave” tour he took this year (with White House senior adviser Valerie Jarrett and Assistant to the President Tina Tchen to highlight the progress being made and encourage more local governments and businesses to follow suit. 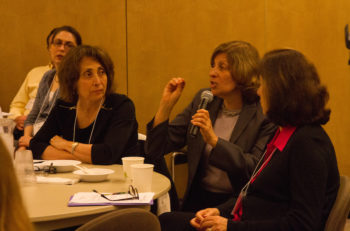 Shifra Bronznick, center, the founder of Advancing Women Professionals and the Jewish Community, has been at the forefront of the paid leave moment among Jewish organizations. (Nomi Ellenson)

President Barack Obama called for action on paid leave during his State of the Union address in January, describing the United States as “the only advanced country on Earth that doesn’t guarantee paid sick leave or paid maternity leave.”

The Family and Medical Insurance Leave Act, or FAMILY Act, is a proposal for paid leave from lead sponsors Sen. Kirsten Gillibrand, D-N.Y., and Rep. Rosa DeLauro, D-Conn., who described it recently in the Washington Post as a “modern, workable model that draws upon lessons from successful programs in California, New Jersey, Rhode Island and around the globe.” It has 106 co-sponsors in the House of Representatives and 19 in the Senate.

In the meantime, the Jewish community is an increasingly vital part of the “Lead on Leave” movement.

A quick glance at the 100 organizations on AWP’s list indicate an audacious goal has been met. Many of the Jewish organizations with the highest CEO pay are embracing paid leave, with the American Jewish Joint Distribution Committee, Birthright Israel and the Foundation for Jewish Camp among them.

But robust family-friendly policies still aren’t the norm. Notably absent are several Jewish labor and social justice organizations. When I asked Bronznick about this, she said that she’s sure, in time, they’ll come on board. Diplomatic optimism is important when you’re playing the long game — and it’s paying off.

“In the last two years, the Jewish Federations of North America’s CEO, Jerry Silverman, and EVP, Mark Gurvis, sent a letter to federations across the country extolling the benefits of these policies and urging local federations to adopt these policies,” Bronznick said. “So the virtuous circle continues to expand.”

For Jacob Feinspan, executive director of Jews United for Justice, AWP’s efforts showed him that a paid leave policy was “the smart thing to do.” It’s also an issue the organization has galvanized around; JUFJ is a lead partner in the DC Paid Family Leave Coalition and the push for paid leave legislation that the Washington Post calls “the most generous in U.S.”

READ: From the archives — 1920s Vilna mommy wars and other tales of Jewish motherhood

“Part of running a Jewish communal organization is valuing the people that are part of our community,” he added.

Sari Ferro, vice president of human resources at UJA-Federation of New York, the nation’s largest federation, said that when Broznick started the initiative, paid leave was lacking in the community.

“I felt that at my organization,” Ferro said. “We had a large percentage of women, a high turnover. There was a need to do something … a stronger, separate maternity leave policy [beyond disability] was needed to make this a better place to work.”

In the past three years, 47 employees have taken advantage of UJA-Federation of New York’s new parental leave policy.

“People shouldn’t have to fear that they can’t pay their bills because they’re on maternity leave,” Ferro said. “It doesn’t feel very communal or family friendly.”

At the end of 2015, AWP will formally cease operations, “the natural outcome of its original intent, which was to serve as an ‘intervention’ rather than a permanent institution,” according to a recent AWP report. In preparation, the organization has been readying a network of next-generation catalysts who will gather in New York on Oct. 29 for the “AWP Culminating Convening.”

“The reality is that organizations that want to be a magnet for talent can’t afford not to have paid leave,” Bronznick said. “The misconception is that raising the next generation is a personal, individual task rather than a collective responsibility.”