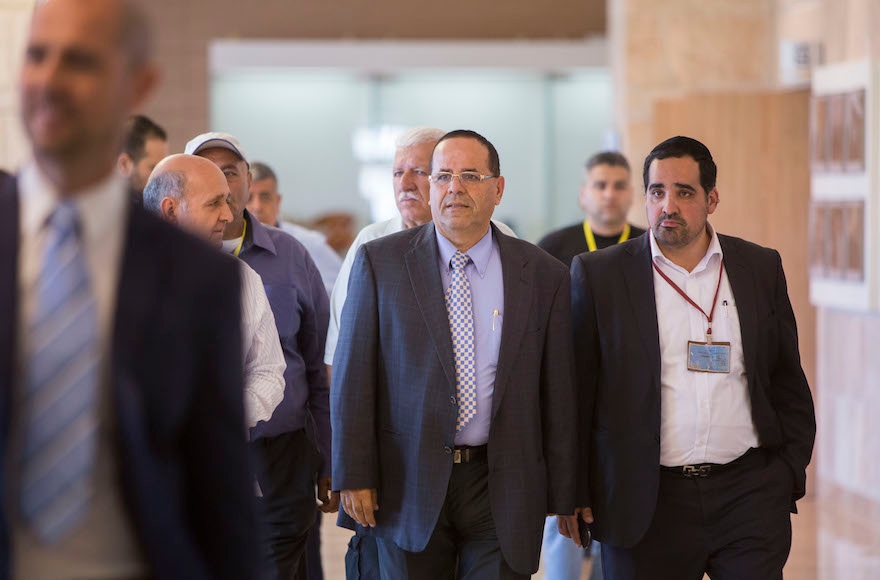 Ayoub Kara arrives at a Likud party meeting at the Knesset in Jerusalem, Israel, May 18, 2015. (Yonatan Sindel/Flash90)
Advertisement

Kara, a Likud lawmaker and the deputy minister of regional cooperation, was required to take additional courses to fulfill the requirements for his master’s degree in public policy, but still managed to graduate on time in 2013, according to the Israeli business newspaper.

Tel Aviv University spokeswoman Orna Cohen confirmed in a statement to JTA that Kara received no credit in a course following the submission of a final paper in which “a problem” was found. The university knew of no other plagiarism allegation that involved the long-serving Knesset member and later deemed his loss of course credit sufficient punishment, she said.

According to Cohen, lecturer Gal Alon filed a formal complaint with the university in July 2012 alleging that Kara’s final report for his course plagiarized wholesale from a paper published by the Myers-JDC-Brookdale think tank in Jerusalem. Alon said he readily identified the plagiarism because he played a role in formulating the original policy paper.

At a hearing in June 2013, the university disciplinary committee determined Kara’s loss of credit for the course was sufficient punishment and recommended against further action, according to Cohen.

Kara spokesman Shlomo Weiser told JTA that Kara’s work for the course was rejected because he had misunderstood citation rules for using government documents in academic work. Weiser suggested the lecturer’s plagiarism allegations might have been motivated by political differences with the right-wing politician, though he offered no evidence to that effect.

Weiser also noted that after Kara failed to win election to the Knesset in 2013, he took advantage of a year-and-a-half hiatus from politics to pursue further academic credentials. Weiser said that Kara passed the Israel Bar Association’s examination to become an accredited lawyer during the period and is now considering pursuing a doctorate in public policy. Kara was re-elected to the Knesset in 2015.

Alon declined to comment to JTA about his complaint against Kara, except to say, “There are certain things that should be unacceptable in any academic institution.