Ahead of the G.A., what do Jewish federations actually do? 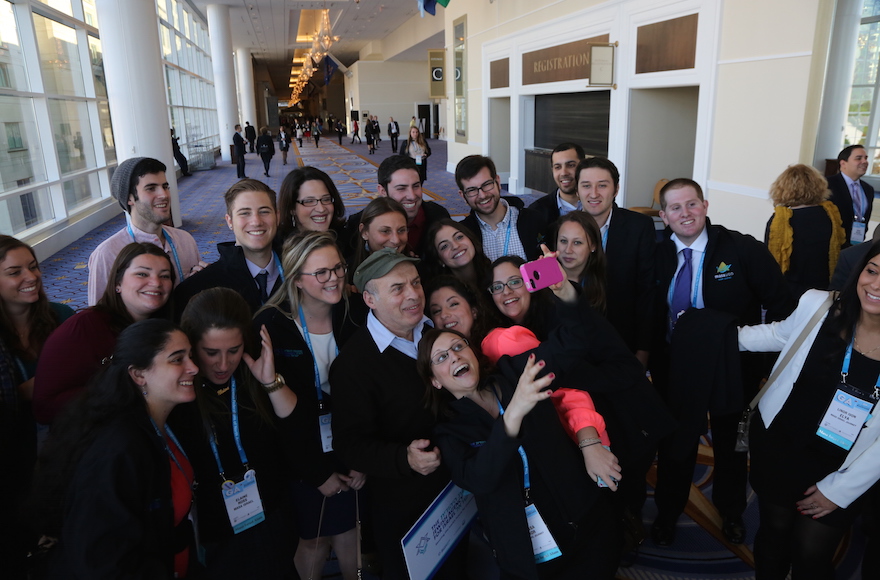 NEW YORK (JTA) – Some 3,000 Jews will gather in Washington Nov. 8-10 for the annual General Assembly of the Jewish Federations of North America. If you’re a little fuzzy on what Jewish federations are and what they do, you’re not alone. Here’s a primer.

What’s a Jewish federation? It sounds like something from Star Trek.

Jewish federations are centralized charities run by local Jewish communities around the United States. In each community, the federation raises money from local sources and then funds a variety of local, national and international needs – everything from elder housing for local Jews to Jewish identity programming in Russia to reinforcing bomb shelters in Israel. Federation charity supports programs in 70 countries. Non-Jews are among the beneficiaries of federation-supported programs.

Is there a Jewish federation where I live?

Probably. There are 151 in the United States and Canada, and they cover pretty much every place with a significant Jewish community, from San Diego to New Hampshire (but not Vermont). About 300 smaller communities don’t have federation offices or staff but have associations that raise money and are part of the federations’ national network, such as the community in Augusta, Maine. Some federations have intuitive names, like the Jewish Federation of Greater Indianapolis, while others do not: Baltimore’s is called The Associated; Boston’s is Combined Jewish Philanthropies. The national umbrella organization for the federations, which is supported through federation member fees, is called the Jewish Federations of North America.

Why were federations created?

Historically, federations were established by local communities to be the central address for Jewish giving. Rather than figure out which charities to support, Jews simply would send checks to their local federation, and the federation would dole out the money according to the needs it assessed — supporting both well-known and little-known causes. In the old days, Jews supported their local federations as a matter of civic duty. Today, fewer Jews feel that way, giving instead to non-Jewish causes or directly to Jewish charities of their choice, and most federations have shrinking donor bases. The number of federation donors has declined by about one-third since 2000, according to sociologist Steven M. Cohen. Nevertheless, many federations have been able to maintain or increase their fundraising by extracting larger gifts from smaller numbers of people. The tradeoff is that many large donations come with strings attached — directed to specific projects, rather than available for general distribution.

Are federations and UJA the same thing?

Historically, federations focused solely on local and domestic needs while local chapters of the United Jewish Appeal (UJA) raised money for overseas giving (United Israel Appeal was the UJA arm focused on Israel-related giving). Federations and UJAs began merging their efforts in the 1970s, and in 1999 the national federation organization, the Council of Jewish Federations, formally merged with national UJA to become United Jewish Communities. In 2010, that entity was renamed the Jewish Federations of North America (sometimes called JFNA). United Israel Appeal still exists as its own legal entity, but mostly serves as a pass-through for federation-raised funds destined for Israel.

Why do federations still exist?

In addition to their annual fundraising and ongoing communal planning for a wide range of causes, Federation leaders contend that federations remain the only way to harness the collective power of the Jewish community– enabling North American Jewry to respond more effectively to sudden crises like wars in Israel and natural disasters, or slower-moving challenges like Jewish assimilation in America. Over the last year or two, federation emergency campaigns have raised $55 million for Israel following its 2014 war in Gaza, $5.2 million for Ukrainian Jews and $1 million for French Jewish security. 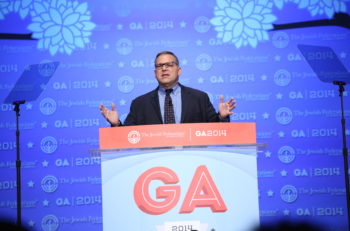 Jerry Silverman, CEO of the Jewish Federations of North America, speaks at the 2014 General Assembly in National Harbor, Maryland. (The Jewish Agency for Israel Flickr)

How much money do federations raise?

Collectively, about $900 million per year in annual campaigns, plus another $1.5 billion in foundation money, endowments and emergency campaigns focused on crises like wars or natural disasters. The biggest federation in the country, UJA-Federation of New York, raised $208 million in its last fiscal year: $151 million through its annual campaign, $34 million in planned giving and endowments, and $23 million for capital projects and special initiatives. That money supported such diverse projects as refurbishing a sauna at a Brooklyn Y, supporting educational leaders on Israeli kibbutzim and providing needs-based scholarships to local Jewish day school students. Overall, federations across the continent manage some $16 billion in endowment assets.

How is federation money distributed?

In 2014, federations gave away approximately $2.4 billion, according to JFNA. Every community decides its own funding formulas. Of money raised from the annual campaigns, approximately 75 percent is spent locally and 25 percent is sent overseas, JFNA officials say. In 2014, $225 million of the $900 million raised from annual campaigns went overseas. In addition, a minor portion of the $1.5 billion allocated from endowments, foundations and donor-advised funds went overseas.

How is federation money distributed overseas?

Most federation overseas money is transferred to the federations’ two main overseas partners, the Jewish Agency for Israel and the American Jewish Joint Distribution Committee, with the Jewish Agency getting three to four times as much as the JDC (a JFNA spokesman declined to specify the precise proportions, saying it was a “sensitive” issue). Those two overseas partners then spend the money on individual programs and infrastructure in Israel and elsewhere around the world. In addition, many federations make their own allocations directly to overseas programs, such as to sister cities in Israel. Overall, the share of money federations provide for overseas giving has shrunk in recent years, prompting the Jewish Agency and JDC to do more aggressive fundraising from other sources.

It’s the annual conference of the Jewish federations, held every November. It historically rotated from city to city, while convening in Israel every five years, and usually draws about 3,000 people — mostly federation lay and professional leaders but also the beneficiaries (and potential beneficiaries) of federations’ largesse. The conferences are part workshop for fundraising and federation work, part networking opportunity and part pep rally. This year’s conference includes everything from sessions on how to engage young adults in Jewish life to a book signing with Dennis Ross to a conversation about strengthening Israel’s Negev region. Once upon a time, the G.A. was a must-attend event in the Jewish professional world, but interest in the confab and its importance have waned. Some federation leaders have suggested meeting just once every two years, and longtime communal observers have warned that G.A.s are at risk of slowly sliding into irrelevance. JFNA officials have worked to spice things up in recent years, both by opening up the planning process to suggestions from other organizations and holding more sessions highlighting key debates in the community. They have also shifted to holding the G.A. in Washington to make the event more accessible and increase the ability to book major speakers. For example, last year’s G.A. featured a public dialogue between two Jewish members of the Supreme Court.

What should we expect at this year’s conference?

Like last year, this year’s G.A. is being held in Washington. It will feature, among others, Israeli Prime Minister Benjamin Netanyahu and Israeli opposition leader Isaac Herzog; NBC newsman David Gregory; actress Debra Messing; Leslie Wexner, the CEO of L Brands, the parent company of Victoria’s Secret and Bath & Body Works; and, of course, Jerry Silverman, CEO of the Jewish Federations of North America. There will be a “culture carnival” at the National Portrait Gallery, a variety of Jewish community awards ceremonies (including one by the American Jewish Press Association, of which JTA is a member) and advocacy meetings with government officials. Federation officials say they hope the conference will serve as a forum for healing and bridge-building after the bitterness of the debate in the Jewish community over the Iran nuclear deal.