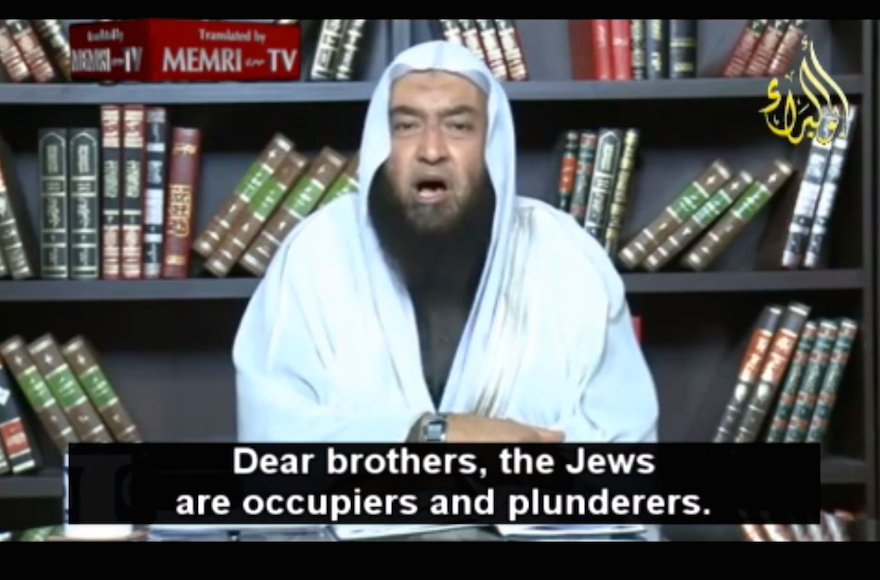 Ali Al-Halabi said the Jews should be killed, but the Palestinians and the Arab world are not strong enough to do so yet. (Screenshot from MEMRI)
Advertisement

JERUSALEM (JTA) — A Jordanian sheik who said it is forbidden to kill Jews except in a time of war clarified his statements, saying that jihad against the Jews is a “mandatory duty.”

In a video distributed Tuesday, Ali Al-Halabi said the Jews should be killed, but the Palestinians and the Arab world are not strong enough to do so yet. The video was translated into English by MEMRI, the Middle East Media Research Institute.

Halabi, the director of the Imam Albani Center for religious and methodological studies in Jordan, had said in a videotaped statement made last year but distributed recently on social media that it is permitted to kill Jews during a declared war or clashes with Jewish soldiers, but that at other times it is a betrayal.

In the new video, he said, “Unfortunately tens of thousands of Palestinians work with the Jews, they get money from the Jews. They need the Jews. Sadly this is the reality of an occupied people.

“I am not saying this as some people mistakenly understood it, as praise for the Jews, who deserve nothing but more and more curses. I am talking about the reality,” Halabi said, acknowledging that the Muslim community would lose an “asymmetrical war” against Israel and the Jews.

“Jihad against the Jews, fighting them and liberating the land from them, is a binding and mandatory duty, incumbent upon the Islamic countries and upon the Muslim individuals, but it depends on capabilities, because everybody knows that America has Israel’s back,” he said.