Op-Ed: For Reform Jews, some good news on engagement 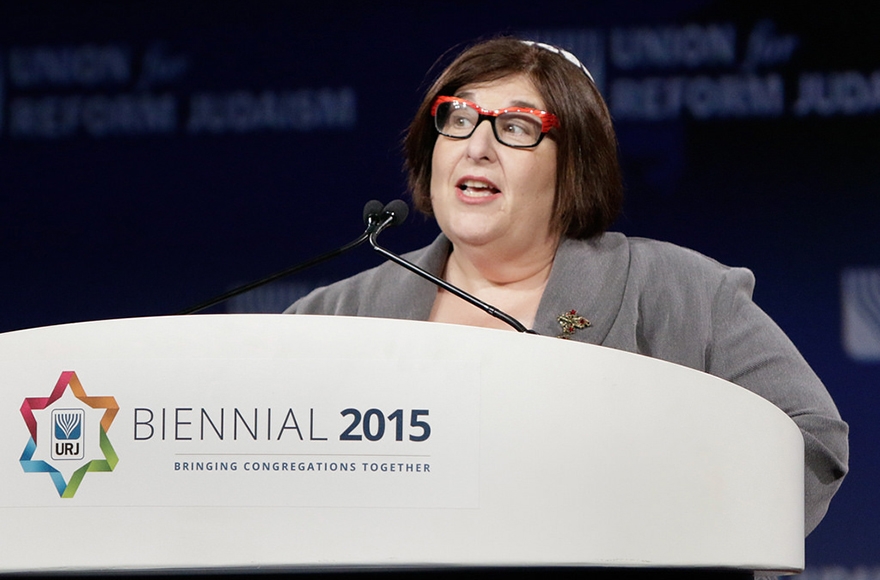 (JTA) — While the 2013 Pew survey uncovered some disturbing evidence of lower levels of Jewish engagement among young people, the same survey contains several pieces of good news for Reform Jews — 5,000 of whom are gathering this week in Orlando, Florida, for the movement’s biennial conference organized by the Union for Reform Judaism.

Since 1990, Reform synagogue members not only grew in number, but they held steady on several measures of Jewish engagement, even as their rate of intermarriage soared and the number with predominantly Jewish friends declined. The positive indicators point to the movement having the human assets it will need as it confronts a variety of challenges ahead.

These inferences, which must be regarded with caution, derive from comparisons I drew between the 1990 National Jewish Population Survey (NJPS) and the Pew survey. While both studies are highly regarded by survey professionals, such comparisons are tricky, in part owing to the vastly different survey methodologies. (As Pew surveyed individuals in 2013 and NJPS surveyed households in 1990, I converted the 1990 respondents to stand for individual adult Jews rather than the entire household.)

That said, it appears that the numbers of Reform synagogue members rose from about 623,000 in 1990 to approximately 756,000 in 2013, commensurate with the expanding number of adult Jews overall, which grew from 4.3 million to 5.3 million during the same time period. In addition, with intermarriage four times higher in 2013 than in 1990 (31 percent of married Jews vs. less than 8 percent in 1990 among Reform temple members), far more non-Jews were affiliated with Reform temples in 2013 than their rather paltry numbers in 1990 when intermarriage was far more rare.

Along with the increase in intermarriage came a decrease in the number of Reform temple members with mostly Jewish close friends. Standing at 36 percent in 2013, the comparable number had been 49 percent in 1990. Obviously, Jewish spouses and Jewish friends go hand in hand, both empirically and metaphorically.

Despite the increased intermarriage and diminished Jewish social networks (aka Jewish friends and family), the 1990 to 2013 period saw hardly any change in the proportions who celebrate Jewish holidays, to take one telling domain of Jewish engagement. For Reform temple members, seder attendance reached 94 percent in 2013, just above the 91 percent reported in 1990. It looks like Yom Kippur fasting also grew, to 75%, from the 70 percent 23 years earlier. Attending High Holiday services (at least at some point) reached 95 percent among temple members, jumping markedly from 81 percent in 1990. In another domain, the proportion that said they gave something to Jewish charities also ticked upward to 85 percent from 80 percent.

To be sure, not all indicators of Jewish engagement moved upward. The survey comparisons show slight declines in some other indicators. Comparing 2013 with 1990, we find drops in monthly service attendance (34 percent in 2013 vs. 40 percent in 1990), in usually lighting Shabbat candles (21 percent “now” vs. 27 percent then), in belonging to a Jewish organization (46 percent vs. 49 percent in 1990), and in feeling that being Jewish is very important (a slight decline to 60 percent from 63 percent in 1990).

But given the surveys’ differences in sampling, in how respondents understood the questions, in the way they were interviewed and in whom they represent, we can’t take the small differences in either direction too seriously.

The overall conclusion: Not only did Reform temples affiliate more adult Jews in 2013, but the Jews who joined them were as active in Jewish life — if not more so — as their counterparts in 1990.

Now, any discussion of Reform temple members immediately provokes curiosity about Reform-identified non-members. From 1990 to 2013, how did they change? For the most part they experienced the same sorts of changes as were recorded among Reform temple members. They grew in number (though not as much), rising from 912,000 to 1,154,000. Their intermarriage rates jumped significantly, almost doubling from 34 percent to 66 percent (of those who were married at the time of each survey). And the numbers of those with mostly Jewish friends declined — from 30 percent in 1990 to 23 percent in 2013.

Notwithstanding the weakening of Jewish social networks, among adult Jews who identify as Reform yet belong to no congregation, the 2013 vs. 1990 comparisons show generally small changes in both directions on those measures of Jewish identity that were found in both studies.

The increased numbers of Reform congregants and their steady levels of Jewish engagement should certainly hearten both clergy and lay leaders of Reform congregations and the continental movement. At the same time, serious challenges are not only on the horizon, but have arrived. Among them are the sharply declining numbers of younger adult congregants, illustrated by the rise of average age from 46 in 1990 to 52 in 2013, as well as the very small number of Reform-identified congregants 35-44 (73,000) as compared with the far larger number just 20 years older (224,000).

Another issue is the very high rate of intermarriage – roughly 80 percent among married Reform-raised Jews during 2000-13.

Yet the over-time patterns do suggest that collectively, the Reform population can contend with high and rising rates of intermarriage, with two provisos: That intermarried couples affiliate with congregations, and that they undertake several other acts of Jewish engagement and commitment.