Before meeting with Obama, Netanyahu recommits to 2 states 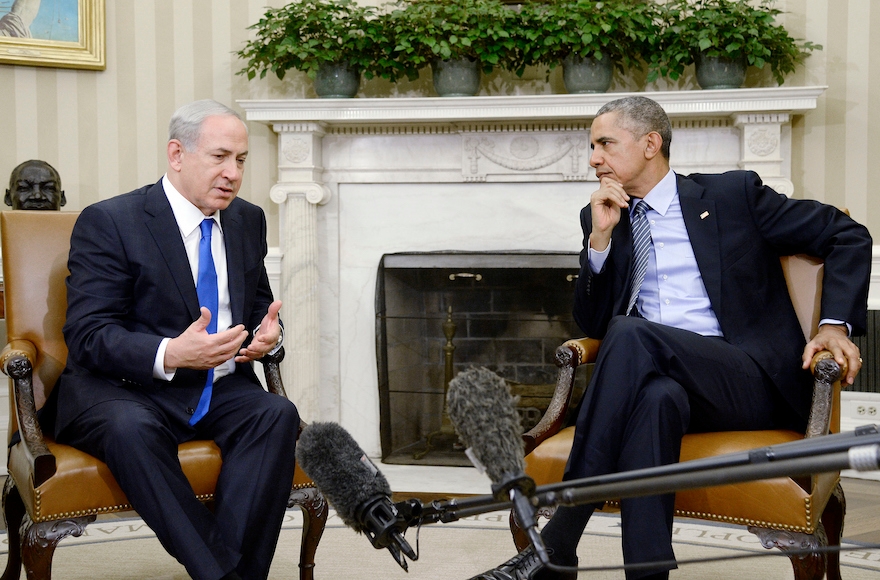 “We have never given up our hope for peace,” Netanyahu told Obama on Monday at the White House in remarks to the media prior to their closed meeting. He said the desired outcome should be “a demilitarized Palestinian state that recognizes a Jewish state.”

Netanyahu’s statement in the Oval Office comes after months of tension between the U.S. and Israeli governments over Netanyahu’s pledge, on the eve of his country’s elections in March, to not allow a Palestinian state to emerge while he is prime minister.

Last week, Obama administration officials, laying out their hoped-for outcomes of Monday’s meeting, said they accepted there would be no peace agreement in the near term. But they also emphasized that Obama expected to hear from Netanyahu how he would preserve the two-state option.

The officials were especially concerned because of the recent surge in deadly Israeli-Palestinian violence focused on the Temple Mount, the Jerusalem site holy to Muslims and Jews.

Netanyahu in his Oval Office remarks did not provide details, but added: “I will discuss with you practical ways to lower tension and increase stability toward peace.” He recently agreed to a Jordanian proposal to install cameras at the site to monitor compliance with the decades-old status quo, which allows Jews to visit the Temple Mount but not to openly worship there.

The Israeli prime minister also thanked Obama for “strengthening the friendship and alliance” between Israel and the United States.

In the White House, the perception is that Netanyahu has derided Obama recently as not being pro-Israel, particularly during the intense debates over the merits of the Iran nuclear deal.

Obama in his remarks said he and Netanyahu would discuss how best to deal with Iran in the wake of the successful completion of the nuclear deal, as well as turmoil in the region fomented by the Islamic State terrorist group. The president appeared to nod toward Netanyahu’s oft-stated equation of Iran and the Islamic State.

“We’ll have an opportunity to discuss how we can blunt the activities of ISIL,” he said, using an acronym for Islamic State, “and Hezbollah,” the Lebanese militia that often acts as a proxy for Iran.

Also on the table was extending U.S. defense assistance to Israel that currently averages $3 billion annually.