Is EU discriminating against Israel by labeling settlement goods? 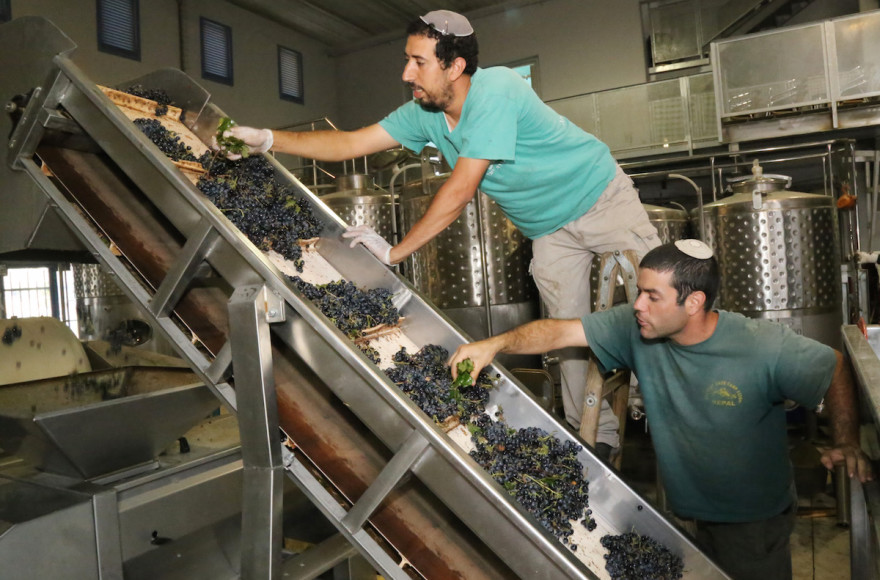 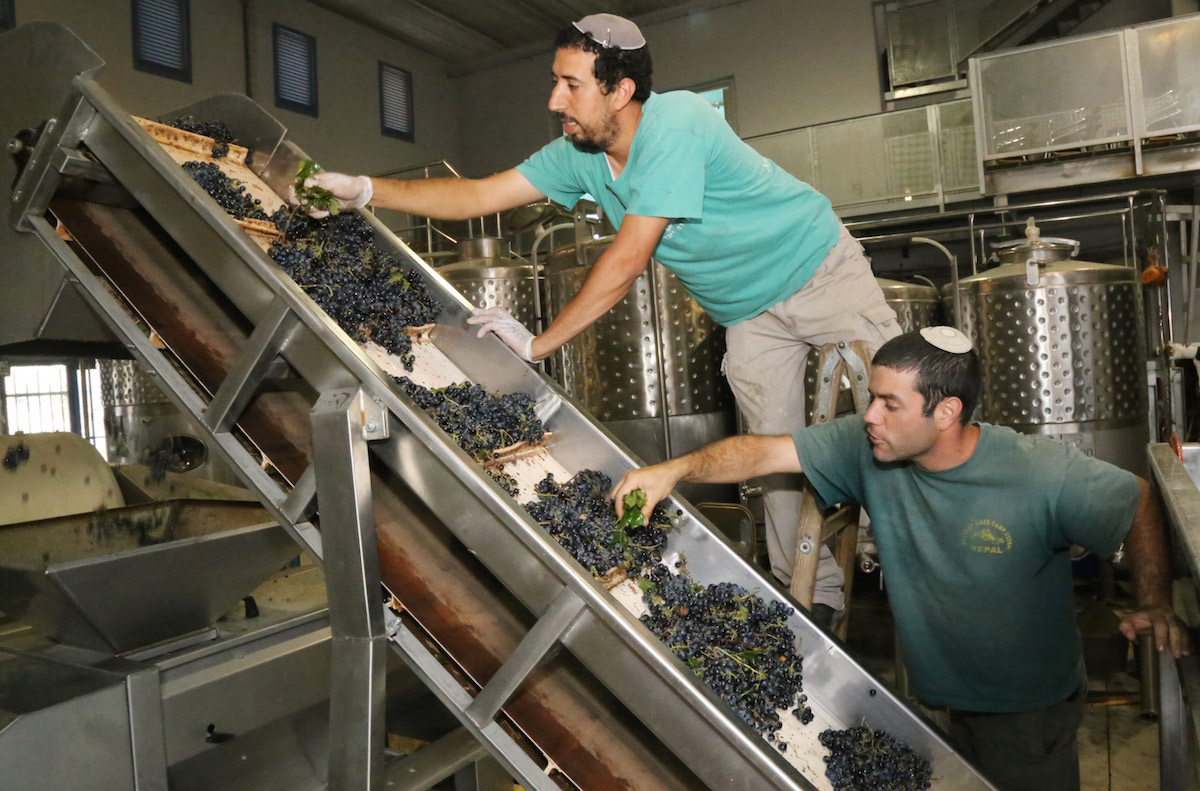 AMSTERDAM (JTA) — To Israel and many of its supporters, the new European Union regulations requiring separate labeling for settlement goods are discriminatory measures reminiscent of Europe’s long history of institutionalized anti-Semitism.

In a harshly-worded statement Wednesday, the Israeli Foreign Ministry said that by ignoring other territorial disputes around the world, the EU is discriminating against Israel. EU officials dismissed that complaint as emotional and irrelevant, saying the guidelines are merely a reflection of longstanding European policy and are aimed at protecting a consumer’s right to know whether a product was produced within Israel’s pre-1967 borders or in disputed territory.

In making their case about Europe’s double standard, Israeli diplomats have found an unlikely ally: Activists for self-rule in Western Sahara, a disputed territory in North Africa claimed by Morocco. The territory’s government-in-exile claims it is under foreign occupation.

But despite formal objections in recent years by the Netherlands and Sweden to labeling Western Saharan produce as Moroccan, the EU has issued no labeling guidelines comparable to those it released Wednesday, which require that certain goods produced in the West Bank, eastern Jerusalem and the Golan Heights be marked to indicate whether they were made by Israeli settlers or Palestinians.

“When it comes to products from Palestine and Western Sahara, there is a clear double standard in the European Union’s behavior, and it’s eroding its credibility across the board,” said Erik Hagen, a Norwegian geographer and activist and former chair of Western Sahara Resource Watch, an advocacy group.

Trade agreements signed in 2000 and 2012 between Morocco and the EU include no mention of occupied land. Yet in 2012, the EU Foreign Affairs Council issued a blanket guideline requiring that “all agreements between the State of Israel and the EU must unequivocally and explicitly indicate their inapplicability to the territories occupied by Israel in 1967.” 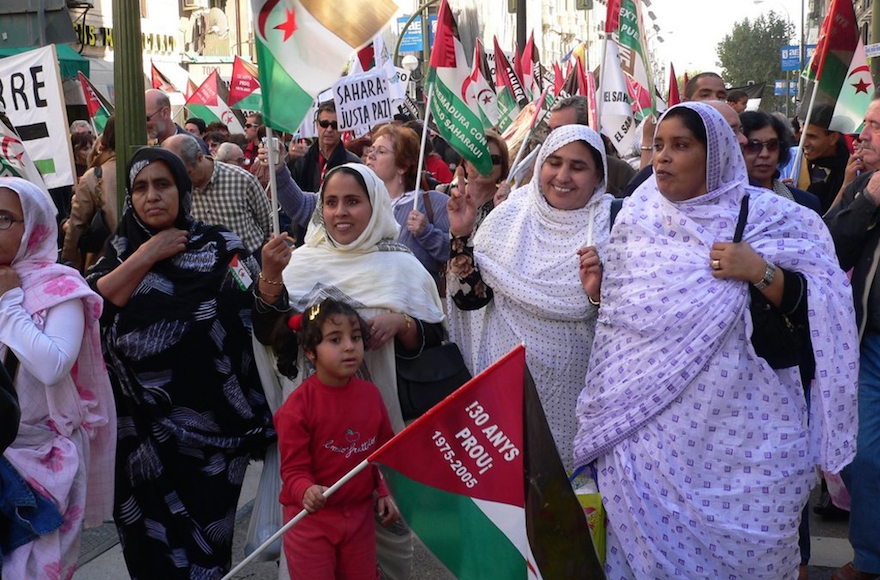 A demonstration in Madrid in support of Western Sahara’s self-determination, Nov. 11, 2006. (Wikimedia Commons)

Products from Western Sahara are sold with a “Made in Morocco” label in the same Danish supermarkets where products from the West Bank are marked as originating in Israeli settlements, according to Morten Nielsen, a Danish journalist active in efforts to raise awareness about Morocco’s occupation of Western Sahara.

Denmark, Belgium and the United Kingdom are currently the only EU member states with special labeling for West Bank products, which, according to estimates cited by the EU, account for less than 1 percent of the total annual trade volume of $32 billion between the union and Israel.

Israeli officials have claimed such measures are merely a prelude to a wider boycott of Israel and have repeatedly drawn comparisons to the boycott of Jews during the Holocaust. “We have historical memory of what happened when Europe labelled Jewish products,” Israeli Prime Minister Benjamin Netanyahu said in September. In April, Former Foreign Minister Avigdor Lieberman said “Europe might as well label Israeli products with a yellow star,” referencing the stars Jews in Nazi-occupied Europe were required to wear.

READ: Israel reacts strongly to new EU guidelines that may change little on the ground

But despite such heated rhetoric, the number of countries labeling settlement products is expected to grow following the publication of the new guidelines, a senior European diplomat who spoke to JTA on condition of anonymity said Tuesday.

The guidelines are limited to Israel, the diplomat said, because they came in response to a letter by 16 EU foreign ministers urging the European Commission to implement a decision it made in 2012 to label Israeli and Palestinian products.

Western Sahara is not the only territorial dispute that has failed to prompt demands for European labeling. Goods produced in Chinese-ruled Tibet, Indian-controlled Kashmir and northern Cyprus, which is occupied by Turkey, do not merit special labels in Europe.

The “unequal use of legal tools owes to the fact that the Israeli-Palestinian profile, because of its historical connotations, is incomparable to others in the level of interest it draws and its visibility in media and politics,” said Hagen. But such factors “cannot explain unequal application of international law, which is being eroded.”

Daniel Rosario, an EU Commission spokesperson for trade and agriculture, told JTA that territorial disputes over the West Bank and Western Sahara “are of a completely different nature.”

“EU considers Morocco as the ‘de facto administrator of the territory of the Western Sahara,’” Rosario wrote in an email. ”In this role, the activities linked to the exploitation of natural resources by an administrative power in an ‘non-self-governing territory’ are not illegal, provided that they take into account the needs, interests and benefits of the people of this territory.”

But to Hagen, such legal hairsplitting is merely a smokescreen.

“You can apply any politically expedient definition you like,” Hagen said. “But as long as the European Union applies different standards to issues, instead of a uniform standard based on international law, it will not have any credibility when its representatives speak of facilitating peace and solidarity.”