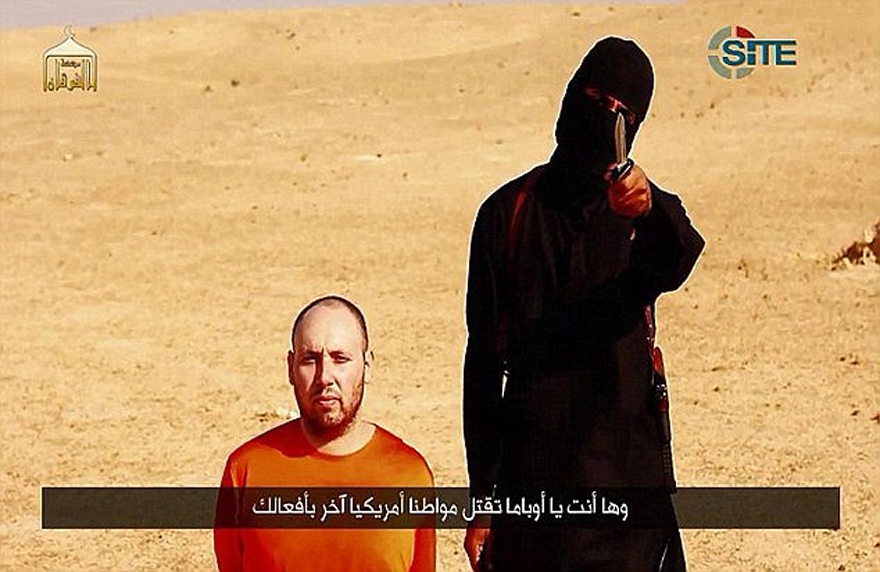 A video shows U.S.-Israeli citizen Steven Sotloff with an ISIS terrorist. (Screen capture from a video released by IS terrorists)
Advertisement

(JTA) — A British jihadist who was filmed murdering a number of captives, including the American Jewish journalist Steven Sotloff, was the target of a U.S. Air Force strike.

Unnamed U.S. and British officials and military sources indicated with certainty that Mohammed Emwazi, whom the British media dubbed “Jihadi John,” was killed in a drone strike in Raqqa, Syria on Thursday, the Daily Telegraph of London reported.

At a press briefing Friday, Col. Steve Warren, a spokesman for the American-led coalition, said the US is still seeking final confirmation, but said that it was “reasonably certain” of Emwazi’s death, according to the New York Times.

An unnamed high-ranking expert told the BBC that there is a “high degree of certainty” that Emwazi was killed. This follows another source telling Fox News the United States is 99 percent sure of his death.

Emwazi, who was born in Kuwait and moved to Britain, grew up in northwest London’s Queen’s Park neighborhood with his two sisters, mother and father. He traveled to the Middle East sometime in 2013 to join Islamists fighting with the Islamic State terrorist group in Syria and Iraq.

Dressed in black with a balaclava covering all but his eyes and the ridge of his nose and a holster under his left arm, he spoke English with a London accent in videos of the beheadings of U.S. journalists Sotloff and James Foley, British aid worker David Haines, American aid worker Peter Kassig and others.