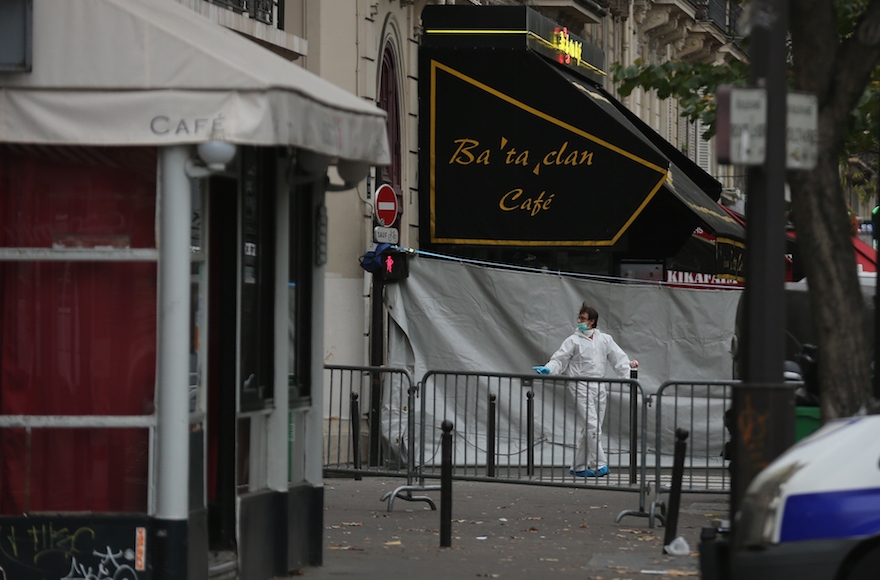 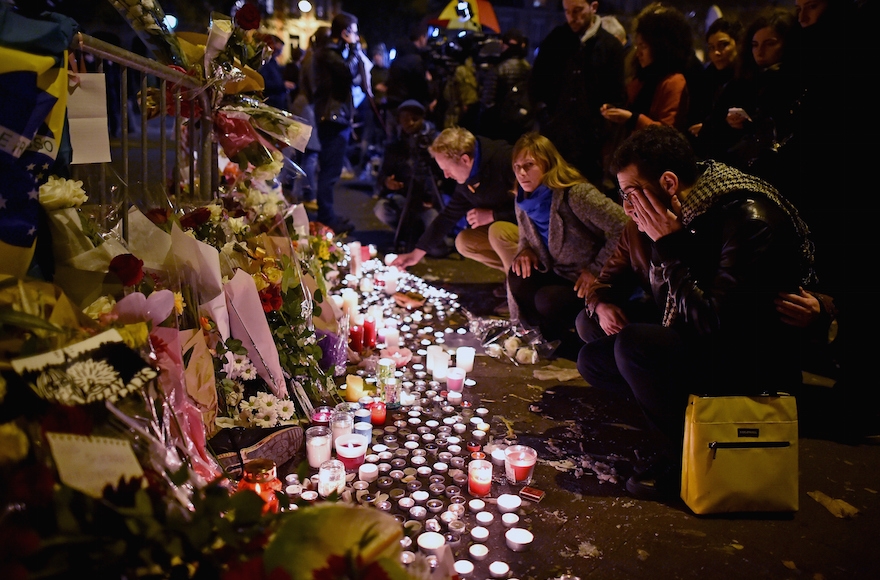 People placing flowers and candles on the pavement near the scene of the Bataclan theater terrorist attack in Paris, Nov. 14, 2015, a day after the attack. (Jeff Mitchell/Getty Images)

(JTA) — Before Friday’s bloodbath at the Le Bataclan concert venue in Paris, this centrally located hall from the 19th century had received numerous threats over pro-Israel events hosted there.

From at least 2006-2009, Le Bataclan was the venue for the annual fundraising gala of Migdal, the French Jewish nonprofit group that supports the Israeli Border Police. Last month, the theater served as the meeting place for a gathering of some 500 Zionist Christians who came there in support of Israel.

In one case involving threats against Le Bataclan — which until September was owned by a French Jew, Joel Laloux — approximately 10 men wearing Arab kaffiyehs over their faces showed up at the theater in December 2008 demanding to speak to management.

“This is something we cannot continue to accept,” one of the men from the group was filmed telling the security guards outside Le Bataclan. “You will pay the consequences of your actions,” the same person, his voice electronically distorted, told the camera after the confrontation, which ended peacefully. “We came here to pass along a small message. Be warned. Next time we won’t be coming here to talk.”

The massacre at Le Bataclan, during a rock concert by the Eagles of Death Metal band from the United States, was by far the deadliest of the six attacks that French security forces said were perpetrated by at least eight terrorists. The attacks have left at least 129 dead and wounded more than 350.

Acting on a plan that French President Francois Hollande said was organized outside France by the Islamic State “terrorist army” and carried out with accomplices in France, the assailants struck two cafes, two restaurants and a soccer stadium north of Paris, using automating firearms and explosive charges.

At Le Bataclan, two terrorists fired at patrons at random but in a calm and deliberate manner, survivors said. Police stormed the building approximately 40 minutes after the killing began. The terrorists were killed in the raid.

Whereas the men who showed up at Le Bataclan in 2008 presented themselves as “residents of the area,” threats of attack against the concert hall as payback for Israel’s actions also included foreign players, according to a 2011 report by Le Figaro.

According to that report, a French woman named Dodi Hoxha told French counterterrorism officers in 2010 of a plot by Jaish Islam, al-Qaida’s branch in Gaza — its name means “the army of Islam” — to organize an attack at Le Bataclan. Hoxha said the theater had been selected because “the owners are Jewish.”

Forensic officers working at the Bataclan theater the day after a terrorist attack in Paris, Nov. 14, 2015. (Christopher Furlong/Getty Images)

Hoxha was arrested that year in connection with an attack against French students in Cairo in 2009, in which one student died. DGSE, the French external security agency, believed the attack on the students in Cairo was to punish France for its perceived role in Israel’s blockade of the Gaza Strip.

According to the website of Le Bataclan, the venue was run until its sale in September by Jules Frutos and Olivier Poubelle for Laloux, whose father, Elie Touitou, bought the venue in 1976. He owned most or all of the theater until September, when the media group of the billionaire Arnaud Lagardère bought a 70 percent stake. Lalloux told Israel’s Channel 2 that he sold the Le Bataclan because he recently immigrated to Israel.

The Anti-Defamation League in a statement Saturday expressed “shock and horror” at the attack, as well as “deep concern” that Le Bataclan had been targeted over Israel or the supposed Jewish affiliation of its owners.

“We hope the French authorities will investigate the possibility that virulent anti-Semitism was a motive in the attack,” wrote Jonathan Greenblatt, the CEO of the ADL.

For France’s far-right Jewish Defense League, the threats against Le Bataclan are proof that it was targeted as punishment for hosting pro-Israel events.

“Pro-Palestinian groups designated it openly as a ‘Zionist’ concert hall, and now we see the result,” the organization wrote in a statement shortly after the attacks. “France woke up to a taste of ‘Palestine.’”

Yet Nicolas Shashani, a prominent French pro-Palestinian activist, said that despite the previous threats, Le Bataclan is not generally associated with the Israeli-Palestinian conflict.

“Le Bataclan may have had a Zionist link in the past, but if the perpetrators wanted to select a site tied to Israel to send a message, it doesn’t strike me as a very effective target,” Shashani said. “To the general population, Le Bataclan is just a concert hall and nothing more.”

Shashani noted that “unsubstantiated rumors” also linked the attack to the Eagles of Death Metal band because it performed in Israel in July. During the concert in Tel Aviv, lead singer Jesse Hughes recalled how Roger Waters, the former frontman for the Pink Floyd band and a promoter of a boycott against Israel, asked the band to stay away.

“I answered with two words: F*** you!” Hughes told the cheering audience, adding: “I would never boycott a place like this.”

The band escaped the attack unscathed, according to reports in French media.

Shashani said it was “far-fetched” to suppose the band was the reason for Le Bataclan’s targeting.

“In previous attacks, there were clear targets,” Shashani said. “Soldiers, cops, a kosher supermarket. This time, the attacks were against cafes, restaurants, a soccer stadium – attacks against the Frenchman on the street.”