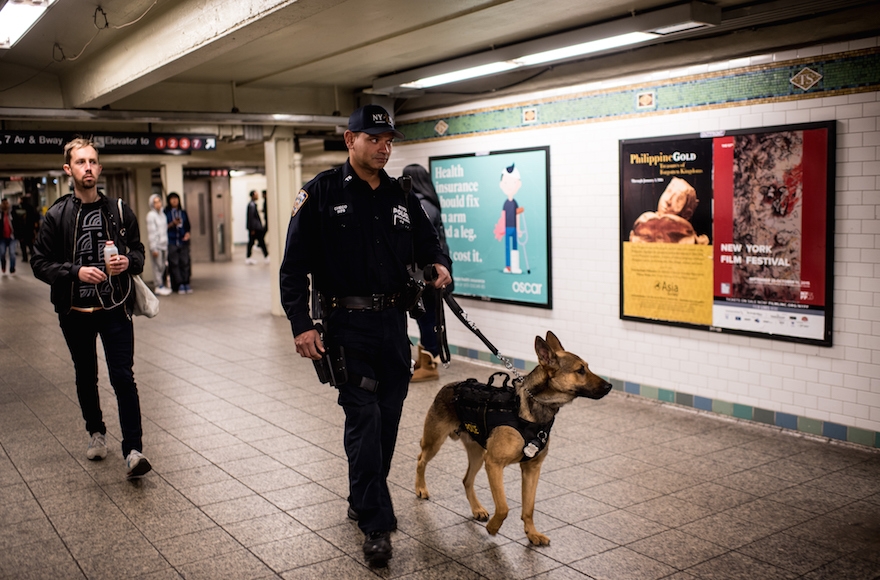 WASHINGTON (JTA) — The series of terrorist attacks that killed at least 129 in Paris pose a couple of major challenges for the United States, Jewish officials and security experts said.

The challenges: security threats from the the 200 or so Islamic State fighters who have returned to the United States, and moral questions surrounding America’s absorption of Syrian war refugees.

The key takeaway from Friday’s attacks, for which ISIS has claimed responsibility, is that the plotters managed to organize the terror wave in the French capital undetected by Western intelligence, said John Cohen, who until 2014 was a top intelligence official at the U.S. Department of Homeland Security.

“We need to come to realization that as robust as they are, our intelligence community is not picking up on threats,” said Cohen, now the senior adviser at the Rutgers University Institute for Emergency Preparedness and Homeland Security.

John Brennan, the CIA director, said that backlash over the scope of intelligence gathering after the 9/11 attacks had eroded the intelligence community’s surveillance capabilities, with rollbacks in eavesdropping coming as a result of revelations by former National Security Agency contractor and whistle-blower Edward Snowden.

READ: Paris attacks leave French-Israelis reeling, relieved to be out

“In the past several years, because of a number of unauthorized disclosures and a lot of hand wringing over the government’s role in the effort to try to uncover these terrorists, there have been some policy and legal and other actions that are taken that make our ability — collectively, internationally — to find these terrorists much more challenging,” Brennan told the Center for Strategic and International Studies think tank on Monday.

There is evidence suggesting that one of the attackers involved in the Paris attacks may have arrived under the guise of being a refugee, and that the planner, Abdelhamid Abaaoud, a Belgian citizen, was a returned fighter from the war zone in Syria and Iraq.

Yet as in the wake of previous attacks in Europe, security experts said the United States does not face the same challenges.

In a New York Times Op-Ed on Sunday, Steven Simon and Daniel Benjamin, both top former Obama administration national security officials, outlined the differences: Far fewer fighters have returned from ISIS territory to the United States and are easier to monitor, and refugees, flooding the shores of Europe in cramped boats, arrive in far smaller numbers to the United States and after a rigorous screening process.

“Counterterrorism often boils down to a search for a few individuals, and the chaos surrounding the flood of refugees — a record 218,000 entered the European Union just last month — has exacerbated the difficulty of keeping track of such incoming security threats,” Simon and Benjamin wrote in their Op-Ed.

Additionally, tracking the approximately 200 fighters who have returned to the United States is easier than monitoring the 2,000-3,000 who are estimated to have returned to Europe, where borders are porous and intelligence agencies do not always cooperate.

Cohen identified an element common to both the U.S. and European arenas: the radicalization of indigenous Muslims. Several of the eight attackers in Paris were natives of France and Belgium, and perpetrators of recent mass attacks in the United States — including those behind the Boston Marathon bombing in 2013 and the 2009 shootings at Fort Hood in Texas — were born in the United States or immigrants of long standing.

Cohen said that U.S. and European law enforcement needed to create more intimate relationships with Muslim communities from which potential terrorists might emerge.

“The first thing that national authorities need to recognize is that an important part of our approach dealing with the threat does not involve them alone, it involves working with local police more robustly,” he said.

Cohen referred to reports that Omar Mostefai, one of the suspected attackers in the Paris attack, was a petty criminal from a dysfunctional family. He dropped off the French intelligence radar after authorities deemed his involvement with extremists not to be a threat. Cohen said local authorities should have engaged the Muslim community and mental health officials to reel the young man back in.

“We have to have the ability when we find people to match that behavioral profile to engage educators and mental health professionals,” he said.

The Paris attack showed terrorists willing to attack a broad cross-section of society, beyond the targeted attacks on Jews and secularists of previous attacks.

Experts suggested emulating in the broader community the heightened awareness of potential threats in the Jewish and other vulnerable communities. Attacks by loners and groups almost always involve advance reconnoitering, which would be noticeable to the trained eye.

Paul Goldenberg, the director of Secure Community Network, the security arm of national Jewish umbrella groups, identified possible “force multipliers” in Paris who may have spotted trouble had they been trained to do so — among them ticket sellers and ushers at the soccer stadium and the concert hall that came under attack.

“At the concert, if the individuals taking the tickets and working the front door were trained for an hour or two just to see what looks suspicious and did not hesitate to call the police, the outcome might have been different,” Goldenberg said.

Cohen praised Amtrak for its comprehensive security training of staff and for posting pervasive notices to passengers to be aware of suspicious objects. Other private sector industries, including hotels, shopping centers and entertainment venues, could emulate Amtrak’s model, he said.

A number of Jewish organizations have expressed concern by the spate of governors, most of them Republicans, who have vowed not to provide services to war refugees from Syria. The Obama administration has said it would take in 10,000 over the next year.

“The Jewish community is particularly affected by the images of men, women and children forced to flee their homes only to find they are unwanted anyplace else,” the Anti-Defamation League said in a statement. “Many of these refugees are fleeing the same terrorists who perpetrated the horrendous attacks on Paris.”

Texas Gov. Greg Abbott was among the first on Monday to say he would not accept refugees.

“Texas will not accept any Syrian refugees & I demand the U.S. act similarly,” he said on Twitter. “Security comes first.”

A number of Jewish groups joined 81 organizations on Tuesday in sending a letter to every member of Congress urging them not to reduce intake of Syrian refugees.

“To turn our back on refugees would be to betray our nation’s core values,” said the letter, which was signed by the ADL, the American Jewish Committee, the National Council of Jewish Women and the Union for Reform Judaism, among other groups. “It would send a demoralizing and dangerous message to the world that the United States makes judgments about people based on the country they come from and their religion.”

Mark Hetfield, the director of the Hebrew Immigrant Aid Society, which initiated the letter and is working to settle some of the refugees, noted that unlike the flood in Europe, the United States is accepting refugees only after extensive screening.

“These are all vetted, carefully interviewed applicants,” Hetfield said. “There are easier ways for a terrorist to get into this country.”