In Paris, an Israeli-like resilience in the face of horror 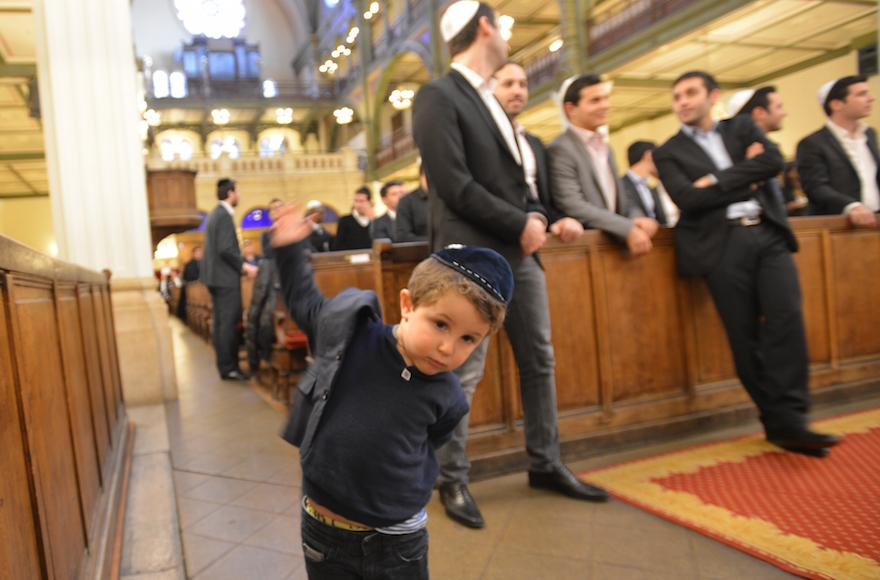 PARIS (JTA) — Watching the Belgian countryside fly by, I reflected on the previous time that I was aboard a high-speed train bound for Paris to cover a horrendous terrorist attack.

It had been less than a year since France-born Islamists killed 17 people in Paris: 12 at the offices of the Charlie Hebdo satirical magazine; the next day, a police officer south of Paris, and the day after that, four Jews at a kosher supermarket, the Hyper Cacher, east of the capital.

The three attacks shocked the French nation to its core, producing its largest-ever protest, as well as spontaneous expressions of grief and solidarity. The French rallied around the three symbols targeted in those attacks: freedom of expression, law and order, and tolerance. For days on end, life in Paris seemed to have been put on hold as a grieving nation struggled to come to terms with a new threat and insult to its value system: homegrown religious terrorism.

The Nov. 13 attacks were far deadlier, with at least 129 fatalities and more than 300 wounded. Yet when I reached Paris, I encountered a much different atmosphere to the one I found in January. Instead of a nation in suspense, I witnessed a life-goes-on attitude that I know from my native Israel — Tel Aviv especially. There, even the most horrific attacks typically have little effect on the daily routines of its drilled residents, who continue their outings to restaurants, weddings and dance clubs.

In Paris, I asked people what had changed — I received a variety of answers. Some said the recent attacks are too scary to dwell on because, unlike the January killings, they weren’t directed at symbols but regular people: sports fans at a stadium; bar patrons in the 10th and 11th arrondissements, concert-goers at the Bataclan hall, where dozens were executed in the bloodiest attack. Others suggested that Paris, like Israel, had simply adapted since January to living as normally as possible in the shadow of terrorism.

Back in January, after arriving in Paris, I headed through empty streets to the Hyper Cacher. On Sunday, I headed to the Bataclan.

On Republique Square and around the six locales targeted Nov. 13, hundreds gathered for impromptu vigils. But two days after the attack, Parisians were already out and about. On Sunday, streets of touristy areas like Le Marais, France’s historic Jewish quarter, were perhaps less busy than normal on a sunny afternoon in November, but the cafes and restaurants were still packed.

It was a marked difference from January, when many businesses closed for days. Four days after the first attack, more than a million people marched through the city in memory of the victims and in protest of terrorism.

The Jewish community’s reaction to last week’s attacks was also different to its response to the January killings.

Whereas Jewish congregations went into near-total shutdown in January as soon as the attack on Charlie Hebdo happened — it was two days before the attack at the kosher market — on Sunday, hundreds of Jews gathered at Synagogue des Tournelles in Le Marais to attend four consecutive religious wedding ceremonies.

Sure, the shul was under heavy police and military guard. But inside, the rabbi cracked the same tired jokes at nervous grooms (“So, young man, should we really trust you to honor that ketubah?” he asked in reference to the Jewish marriage contract.)

Perfumed guests, dressed in their best suits and gowns, greeted each other with kisses on the cheek, including the men, as is customary in France. The rabbi did not say anything about the horrific bloodbath that had transpired only 36 hours earlier.

But in January, many synagogues shuttered their doors for security reasons and as a sign of mourning, and dozens of couples postponed their weddings. And while most major French Jewish cultural institutions announced a brief suspension of the activities following the Nov. 13 attacks, many synagogues remained open. Nearly all of the Jewish institutions resumed their programs less than a day after the carnage.

“We can’t very well stop living every time something like this happens,” Ness Berros, a wedding guest, told me.

At the Grand Synagogue of Paris, known locally as Synagogue de la Victoire, a ceremony and prayer on Sunday in memory of the victims drew a crowd of 200 – a far cry from the 1,000 who gathered there after the Hyper Cacher attacks to find solace in each other’s company.

Granted, the Nov. 13 attacks were less jarring to French Jews because they weren’t as clearly targeted as they had been in January. But the show-must-go-on attitude of Parisian Jews seemed to be a part of the reaction of Parisian society in general — greater resilience or, perhaps, resigned acceptance.

I asked my friend Olivier, a Parisian Jewish start-up wiz, what had changed.

After Charlie Hebdo, he told me, “It was all about making a statement: Don’t touch our journalists, hands off our very French freedoms, ‘liberte d’expression,’ etc.” But the November attacks, “they put a real scare into people,” he said. “A realization they, not the journalists, not the Jews, are the targets. And that’s too scary to deal with, even by going out to the street to protest.”

At Synagogue de la Victoire, I posed the same question to Samuel Sandler, who lost his son, Jonathan, and two grandchildren during a terrorist attack against Jews in Toulouse, where a jihadist killed four at a Jewish school in 2012.

After the initial shock in January, Sandler said, “French people in November understand better what we Jews, and especially in Israel, have always known: That you need to fight terror in a continuous battle alongside your life, not instead of it.”

Haim Korsia, the chief rabbi of France, had a similar message during his sermon at Sunday’s ceremony. French society, he said, “will rise up from its grief like American society rose up from the tragedy of 9/11 and like Israeli society, which never lay down” in the first place.

I asked Sandler if he had any advice for the families experiencing the anguish he was put through in 2012, on how to overcome their pain.

“I’m not the right person to ask,” he said. “You see, to this day, I haven’t really understood or accepted that Jonathan and my grandchildren are gone.”