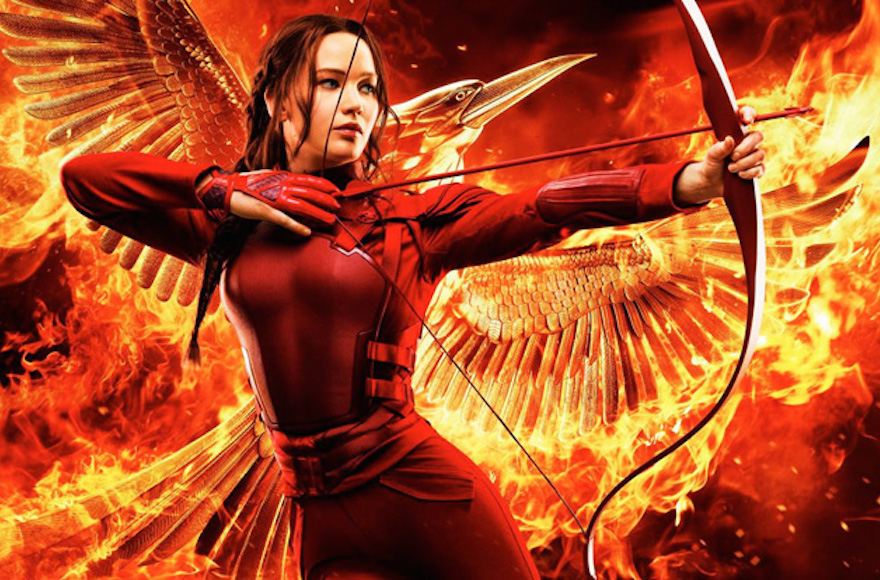 (JTA) — Posters promoting the final “Hunger Games” movie in Jerusalem and the Israeli city of Bnei Brak have scrubbed star Jennifer Lawrence from the main image.

The posters for “The Hunger Games: Mockingjay-Part 2” in these cities contain only the fiery crow from the original advertisement and exclude the foreground image of Lawrence posing as protagonist Katniss Everdeen with a bow and arrow.

“We discovered that public posters with the image of a female are often torn down in Jerusalem, while Bnei Brak does not allow posters with female images,” a representative of the film’s Israeli PR firm told Ynet.

Bnei Brak, a densely populated city with a high haredi Orthodox population, has a municipal regulation that prevents the hanging of posters of women that “might incite the feelings of the city’s residents,” according to Haaretz.

The issue is hotly contested in Jerusalem, which does not have any municipal rules against posters of women.

Liron Suissa, a marketing executive for the company hanging the film’s posters in Israel, said it was far from the first time his firm has felt this “unofficial coercion” from the haredi community.

“We have had endless vandalization, and clients prefer not to take the chance,” Suissa said.

The three previous “Hunger Games” films, which all star Lawrence, have grossed over $2 billion.