The real-life Jewish debauchery behind ‘The Night Before’ Christmas movie 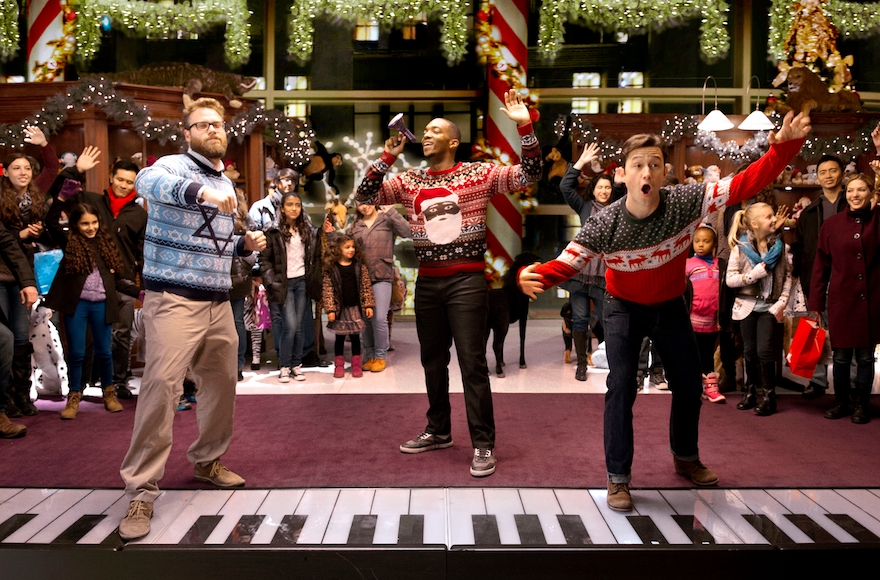 (JTA) — Director and writer Jonathan Levine (“The Wackness,” “50/50”) may have grown up in Jew-centric Manhattan, yet he recalls feeling somewhat like an alien every Christmas.

“I don’t think it was malicious,” Levine, 39, says in a telephone interview with JTA. “But, in a way, I felt like an outsider looking in at the party.”

The sentiment only heightened post-holiday, when his Christian chums came to school wearing or bragging about all the great gifts they received.

Levine’s Christmas was a tad different from his peers, though it may be one familiar to Jews across the U.S.: dinner with the family at a Chinese restaurant.

As a young adult in his early 20s, however, he and a group of friends started a tradition of their own. They would “stumble around looking for the very few places that were open, usually filled with weird people,” he says. “Inevitably crazy stuff would happen.”

“Not as crazy as the movie, though,” Levine adds.

Ah, yes, the movie. In Levine’s “The Night Before,” which opens Friday, childhood friends gather for their annual Christmas Eve night of debauchery. Isaac (played by Seth Rogen) is about to become a father and is frightened by the prospect; Chris (Anthony Mackie) is on the last legs of an NFL career and is taking drugs to sustain it; commitment-phobe Ethan (Joseph Gordon-Levitt) is miserable because he let the girl of his dreams get away.

It seems this will be their last bacchanal, so they embark on a drug- and alcohol-fueled search for the Nutcracka Ball, a super-secret yet reportedly the ultimate holiday party.

Given the plot and its cast, there is of course a sizable raunchy, laddie element to the film. But at its heart there is a sweetness to “The Night Before” concerning friendship, growing up and a Don Quixote-like search for the elusive meaning of life.

“Certainly, it’s a quest of sorts,” Levine says. “Each person is missing something in their lives and believes finding this party with friends will fill that void. In the end, there is something to be said about expectations versus reality — and that’s in there beneath all the dick jokes.”

Reminiscing about his own Christmas Eve journeys, Levine says, “What I really loved about it was that the holidays were such an emotional time — whether you’re Christian or Jewish — and the feeling of being really close to your friends was wonderful.” 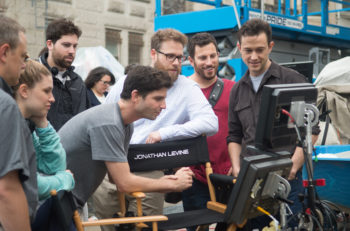 Jonathan Levine, center, in gray T-shirt, on set during the filming of “The Night Before.” (Courtesy of Columbia Pictures)

Levine’s group was mostly Jewish, but included a few non-Jews “who didn’t like their families,” he says.

“It made me realize that the traditional perfect Norman Rockwell painting family didn’t exist, and that was fertile ground to explore in a movie,” he adds.

The film is laugh-filled, but some guffaws may be a bit uncomfortable. Historically in the film business — and in real life — Jews have attempted to fly under the radar, a kind of head-in-the-sand mentality suggesting there is safety in anonymity. While that certainly is changing, what Issac, the only Jewish character in the film, does in one scene seems to cross a line — or come close to it.

Every year the boys get new, outlandish holiday sweaters to wear for the evening. Isaac’s features a Star of David, and it’s what he has on when he winds up attending Christmas Eve Mass with his wife and in-laws — and drunkenly throws up in the aisles of the church.

READ: Is Joseph Gordon-Levitt’s ‘Don Juan’ bad for the Jews?

“I think that it’s kind of nice that he’s wearing his [Star of David] and that he’s proud of who he is,” Levine says. “I think that’s pretty cool, though I don’t know what that says culturally [about how young Jews are portrayed in film]. This character was always struggling with what it’s like to be Jewish on Christmas and the fact that he wears the star with pride is a positive thing.”

Still, Levine admits that he was surprised that people weren’t offended when he started screening the movie.

“To me that goes to the inherent sweetness of the film,” he says. “This movie is funny, not blasphemous. The movie has such sweetness, I don’t think anyone feels we’re making some sort of statement about religion.”

Three of the movie’s four writers — Levine, Ariel Shaffir, Evan Goldberg and Kyle Hunter — are Jewish; Hunter is the only non-member of the tribe.

“We all identify very strongly with Judaism culturally, and we write about what we know,” Levine says. “There was never any notion that we wanted to hide it.”

Levine started making movies when he was 12 years old. “I wouldn’t say we were incredibly religious,” he says of his family. “We observed the High Holidays and did a little more than the bare minimum that a lot of Reform Jews do.”

Today, as the father of a 2-month-old, Levine most closely identifies with Rogen’s character, who is uncertain he’s ready for fatherhood. Levine, by contrast, was prepared to be a dad — and he’s already had alone time with his son. His wife was the lucky one to attend James Franco’s bar mitzvah — whose genitals, as it happens, make a cameo in “The Night Before” — while he stayed home on diaper duty.

As for his plans this Christmas, Levine says he’s returning to his roots: He and his family will celebrate with some Chinese food and a movie.