Jewish gymnast Aly Raisman has her eye on Rio 2016 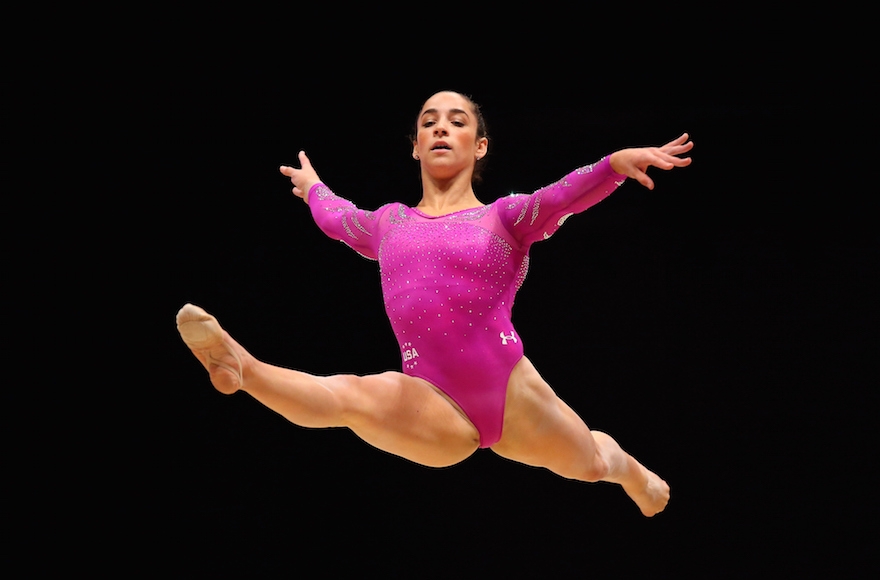 GLASGOW, Scotland (JTA) — Once the music started playing — not the “Hava Nagila” tune that made her the Jewish poster child of the London Games, but something equally folksy — Aly Raisman tumbled right out of bounds. On her first bit of gymnastics at her comeback World Championships here last month, she had quickly incurred a major setback.

This was certainly not how the 21-year-old defending Olympic champion on floor exercise saw the start of her first World Championships in over four years. The competition, after all, comes less than a year before the Olympic Games in Rio, where she hopes to compete, and at a time when she faces her stiffest competition yet — from her U.S. teammate and two-time world champion Simone Biles.

READ: Aly Raisman: 5 things to know about the once (and future?) Olympian

After winning two gold medals in London, including one with the U.S. team, Raisman, then 18, took time off from gymnastics to enjoy opportunities that had come her way — performing on tour with her teammates, competing on “Dancing With The Stars,” being a special guest at the 2013 Maccabiah Games in Israel, the global Jewish sporting event.

It was a departure for Raisman, who while training is careful about preserving her energy.

“There will be in the times in the summer we’ll go to the Cape, and she’ll be like, ‘It’s going to be too exhausting driving to the Cape. It’s too much. I’m just going to stay home,’” said her mother, Lynn, who raised Raisman in a Reform Jewish home in Needham, Massachusetts. “That year off, everything that came her way she could say ‘yes’ to because she wasn’t training.”

According to Lynn Raisman, a mother of four, her eldest child has always possessed this focus and intensity, even as a young girl.

“I look back at some of those times when we didn’t do things as a family and she stayed home, like, you were so young, you were such a low level. … She just always was like that, very devoted, very regimented with the training,” Lynn said.

According to her mother, Raisman, despite all the fun she was having, decided that she would come back very early into her year off.

“Initially, two weeks later [after the Olympics], she was like, ‘Yeah, I’m done,’” Lynn recalled. But then a couple months later, she told her mother, ‘I want to come back.’”

Though she resumed training in the fall of 2013, just over a year after her Olympic performances, she didn’t start competing again until this spring, at a friendly meet in Jesolo, Italy, where she won the bronze medal behind two of her U.S. teammates. She won bronze again in the all-around at the U.S. Championships in August.

But these are not the medals she’s after in her comeback. Raisman is chasing the one that got away — a podium position in the Olympics all-around competition, after she was bumped to fourth place in 2012. She thinks about that missing medal “all the time,” Raisman said, and how that Olympic disappointment is motivating her to try to make her second Olympic team. That’s no mean feat in the U.S., which has such a deep bench it could send more than one medal-worthy team to Rio.

Perhaps Raisman simply wanted it too badly in Glasgow. After her disappointing floor exercise, her afternoon went further downhill. There was a botched landing on vault. On the bars, she peeled off on a release move. She appeared to be stunned momentarily as she picked herself up off the mat and remounted the event to finish her routine.

Worse still were the results: She did not qualify to make the all-around finals.

But in the team finals in Glasgow, with no individual medal opportunities on the line, Raisman redeemed herself. On beam, the nerves were gone; she moved quickly and aggressively. And on floor, she managed to contain her power and stayed in bounds, helping the U.S. to a five-point victory over China and Great Britain. Raisman and her teammates celebrated on the sidelines, hands clasped and raised in victory after Biles’ floor score was posted. It was a similar scene to the one that played out in London, when the five members of the Olympic team waited for the final mark to make their victory official.

For Raisman, the hardest part of her gymnastics comeback seems to be learning how to control the nervous energy.

“I was just a little too hyper,” Raisman explained.

Physically, despite no longer being a teen, Raisman says she has been able to recoup every skill she had in London. She’s even added new elements to her repertoire.

“I almost feel like I’m stronger than I was last time,” she said.