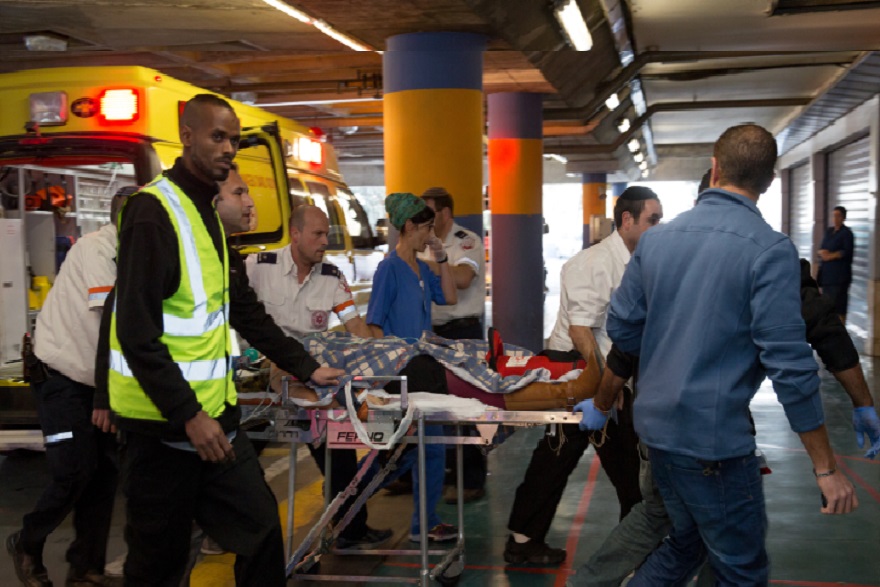 Paramedics wheel an Israeli woman who was stabbed in the West Bank into the emergency room at the Shaare Zedek Medical Center in Jerusalem, Nov. 22, 2015. She died of her injuries. (Yonatan Sindel/Flash90)
Advertisement

JERUSALEM (JTA) — A 20-year-old Israeli woman was killed in a stabbing attack — the fourth attack in the West Bank in less than 24 hours.

Hadar Bucharis of Safed, a city in northern Israel, was stabbed on Sunday afternoon at the Gush Etzion Junction, near the West Bank settlement of Alon Shvut. She was declared dead at a Jerusalem hospital.

The assailant, identified by the Shin Bet security service as Wissam Tawabte, 34, was shot and killed by troops at the scene. Tawabte, a Palestinian from the nearby village of Beit Fajjar, did not have a previous terror history, according to the Shin Bet.

At the same junction three days earlier, American yeshiva student Ezra Schwartz and two others were killed in a shooting attack, reportedly by Palestinian gunmen. Other deadly terror attacks have taken place at the junction in recent months.

Earlier Sunday, a Palestinian taxi driver attempted to run over a group of Israelis at a junction near the West Bank settlement of Kfar Adumim, the Israel Defense Forces said. Unsuccessful in his attempts, he exited his vehicle and tried to stab Israelis at the junction. The attacker, identified as a resident of a Palestinian village near Ramallah, was shot and killed by a civilian at the scene, according to the IDF.

That morning, a 16-year-old Palestinian girl from Nablus allegedly attempted to stab an Israeli near the West Bank settlement of Ariel. An Israeli civilian who witnessed the attack ran over the girl, after which Israeli security forces shot her dead, according to reports. The Israeli  civilian was later identified as Gershon Mesika, a settler leader who is the former head of the Samaria Regional Council.

On Saturday evening, a Palestinian man from a village near Hebron in the West Bank allegedly stabbed four people in front of a sports stadium in the southern Israeli city of Kiryat Gat, including a 13-year-old girl. Their injuries were reported to be moderate to serious.

The alleged stabber and his two alleged accomplices were found hiding in a home near the attack and arrested Saturday night after a manhunt that lasted several hours. The alleged attacker reportedly was holding a bloody knife at the time of the arrest.

The next morning, Israeli Prime Minister Benjamin Netanyahu announced more stringent security measures being taken in the Hebron area, where most of the recent terror attacks have originated. Netanyahu said they include more roadblocks and arrests, as well as an increase in security forces.

Netanyahu cautioned Israelis to be on “maximum alert” and praised them for not only their awareness, but their “considerable resourcefulness and courage.”