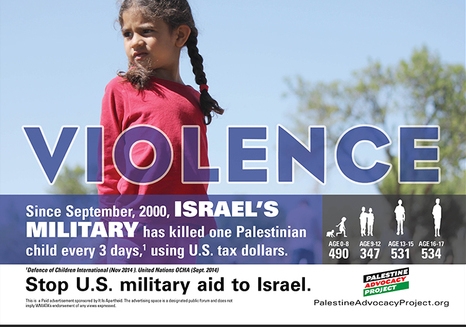 The decision approved Monday, which takes effect on Dec. 1, comes amid an ongoing legal dispute over subway advertisements on the Israeli-Palestinian conflict.

The transit authority said it will no longer accept ads on its subways, trains and buses about political issues or those that express opinions on public debates about “economic, political, moral, religious or social issues.”

Its current policy bans ads with language that demeans or disparages individuals or groups, and for political candidates and ballot questions.

The vote was taken following a contentious meeting in which advocates on both sides of the Israeli-Palestinian conflict pressed their views.

In a statement last week to JTA, a transit authority spokesman said, “To reduce unnecessary litigation which can arise from issue-based ads of this nature, the MBTA is currently considering whether to amend its advertising guidelines and in the future will not accept ads concerning political issues or matters of public debate.”

The comment was in response to the authority’s approval of an ad by the Palestine Advocacy Project currently being displayed at one subway station. The poster, which features a large photograph of a child and the word “violence” in large, bold letters, accuses Israel’s military of using U.S. tax dollars to kill 2,000 Palestinian children since September 2000, and calls for the end of U.S. military aid to Israel.

Previously, the transit authority rejected a pro-Israel ad by Pamela Geller of American Freedom Defense Initiative, but later allowed the ad after it was resubmitted with changes in wording.

In a statement before Monday’s meeting, the American Jewish Committee Boston, the Anti-Defamation League’s New England office and the Jewish Community Relations Council of Greater Boston took issue with the decision to allow the recent ad by the pro-Palestinian group and called on the transit authority to remove the poster.

The ad “elicits anger from viewers,” the joint statement says. “At a time when Jews and Israelis around the world are facing mounting violence and anti-Semitism, this false and deceptive advertisement can only be construed as hostile and dangerously provocative.”

In a statement before the meeting, JCRC Executive Director Jeremy Burton said the group values robust debate over complex issues. “However, such issues will not be resolved by misleading and provocative propaganda that stands to further divide the public.”

Richard Colbath-Hess of the Palestine Advocacy Project said criticizing government is a right.

“Every government in the world needs to be able to be criticized,” he said.

According to the State House News Service, as reported in the Boston Business Journal, Colbath-Hess, a recently retired professor, said he is Jewish and his father is a Holocaust survivor.

Sarah Wunsch, deputy director of the American Civil Liberties Union, told the Boston Globe she believes the decision is going in the “wrong direction for a free society.” Earlier, she told JTA that the ACLU has long argued on behalf of controversial advertisements in the transit system as a form of legitimate expression in a public space. The group represented the Palestine Advocacy Project in recent discussions with the transit authority.