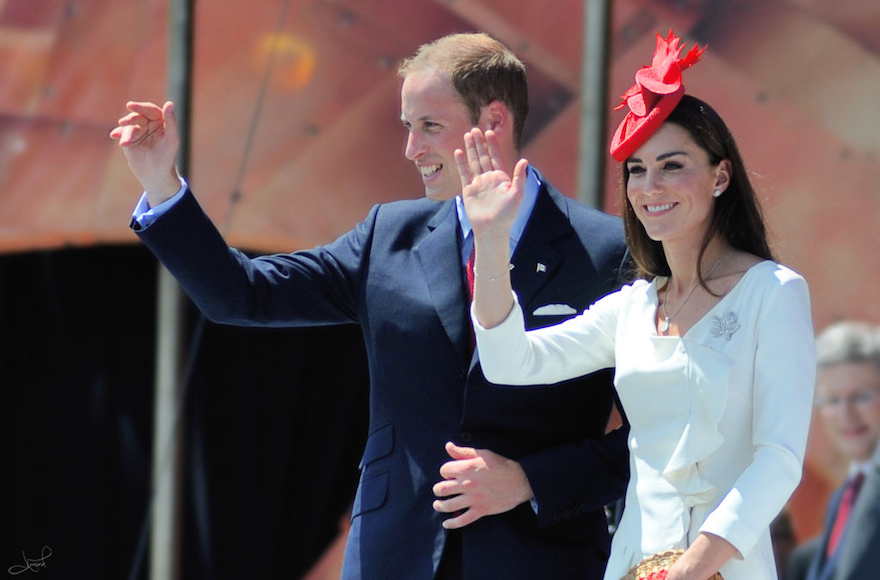 NEW YORK (JTA) — The so-called “Kate Middleton effect” — by which anything the Duchess of Cambridge wears becomes an instant best-seller — seems to know no bounds.

She has graced the covers of countless magazines; entire blogs are devoted to what she wears. And, as it happens, the duchess is the perfect style icon for observant Jewish women.

So it’s perhaps no surprise that one of Middleton’s signature style pieces — the fascinator — has caught on as a head covering in synagogues on this side of the pond.

In case you’re wondering, fascinators are headpieces attached to the head by clip or headband. They’re often ornate and are typically smaller — or at least cover less hair — than hats. And it’s not only the Duchess of Cambridge who’s made them fashionable. Sarah Jessica Parker also helped popularize the style when she donned one that looked like a garden (with monarch butterflies, to boot) to the London premiere of the “Sex and the City” movie, Lady Gaga’s been spotted in fascinators, and the headwear selections of several guests at Middleton’s 2011 wedding to Prince William set social media abuzz. (Post-wedding, sales of fascinators reportedly climbed 300 percent — so much so that an inevitable backlash is underway.)

But for observant women, fascinators offer a fashionable take on a rule in the Mishnah Berurah — a 19th-century commentary on the Shulchan Aruch, a Jewish code of law — that forbids any blessing or prayers to be said in the presence of a married woman with her hair uncovered.

Today, some fashion-forward Jewish women now wear fascinators in place of a hat or lace doily during services at synagogue.

“It’s always great when Jewish law and fashion can coexist,” says Allison Josephs, the Orthodox founder of the website Jew in the City. “Fashion is one of the ways observant Jewish culture can grab pieces of larger culture, and women don’t have to feel cut off.”

“Women who wear wigs aren’t going to replace one with a fascinator, but they’ll add it,” Josephs adds. “It’s a fun accessory.”

Bella Basaleli, who owns Bella’s Hats and runs hat parties in the New York metropolitan area, says nearly half the headpieces she sells are fascinators.

For women in the more liberal modern Orthodox synagogues, they’re a trendy alternative for those moving away from wearing the more traditional hats.

“A lot of these girls wouldn’t wear anything otherwise,” Basaleli says.

Most of Basaleli’s fascinators cost $40 to $120. She decided to start her business after paying “way too much” for a fascinator for her son’s bar mitzvah at a boutique on Long Island two years ago.

“I wanted headwear that was different than what I would normally wear to shul,” she says. “As it was a special occasion, I decided to wear a fascinator. Fascinators were becoming very trendy at our shul, and it was the first time I had ever bought one.”

Leah Zweihorn wears fascinators to her modern Orthodox synagogue in Queens with some regularity (when she first married, Zweihorn covered her hair all the time; now she only does it at synagogue). At a recent family wedding, she picked a fascinator to match her dress. 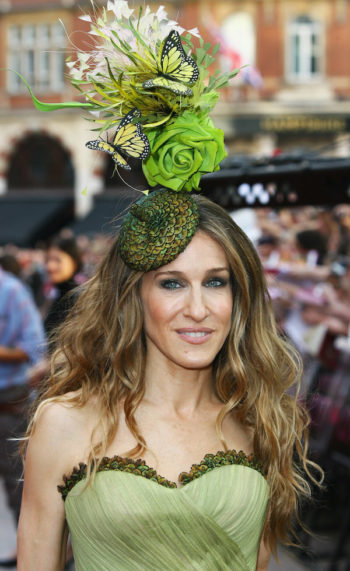 Sarah Jessica Parker attending the premiere of the “Sex and the City” film in London, May 12, 2008. (Gareth Cattermole/Getty Images)

“They’re just more fun than hats,” Zweihorn says. “Also, I find it harder to talk to people — especially in a crowded room — with a hat, since it blocks some of my view. But even more significantly, many of them come down over my ears and it’s harder to hear.”

Zweihorn gets plenty of attention when she wears a fascinator, she says, and at shul she tends to opt for larger ones that cover more hair.

“My husband feels strongly about women covering their hair in shul, so I like to wear something a little bit more substantial,” she says.

Indeed, not all synagogues or rabbis agree on the legitimacy of the fascinator as a head covering. Some synagogues in England — where fascinators have enjoyed long-running popularity, even prior to the ‘Kate effect’ — explicitly state the headwear is not permitted.

For example, the website at the Borehamwood and Elstree Synagogue, just outside London, states: “All Jewish married ladies must wear a hat or other head covering (not just a ‘fascinator’) while in the Synagogue.”

But Rabbi Benjamin Skydell of Congregation Orach Chaim, a modern Orthodox synagogue in Manhattan, explains that a fascinator — even one on the smaller side — may be entirely kosher. The passages in the Talmud that deal with the standards of hair covering mention little about how much hair must be covered, he says. There’s even discussion as to whether wearing just a basket on one’s head is enough (remember, women way back when carried baskets).

READ: Can Tel Aviv become a center for fashion?

But the rabbi also recognizes that many women who wear fascinators to synagogue are less concerned about the Talmudic rules and see it more as a fashionable take on a long-held tradition.

“For a lot of modern Orthodox women, it’s a vestige of the past,” he says of these women covering their heads in shul.

For women in Conservative congregations, the emergence of fascinators is a sign of changing times. Johanna Ginsberg, who attends an egalitarian synagogue in New Jersey, says she’s seen them pop up in in recent years. She even held a hat party earlier this year where fascinators were among the pieces for sale.

“Older women in the Conservative community carry more baggage when it comes to head covering,” she says. “They see hats as anti-feminist and prefer to wear kippot,” which were traditionally seen as a necessity for men only, not women.

“But the younger women don’t feel the way because they haven’t had to confront this issue. Many of those women like hats and fascinators because they feel more feminine than the kippah.”

One downside to the look has absolutely nothing to do with modesty.

Rather than a hat, which can be plopped on your head and fix a bad hair day, a fascinator requires perfect placement.

“I don’t like it to look like I’m wearing a headband, so I need to cover the band with my hair,” she explains. “It takes more time.”

The end result, though, is worth the trouble.

“They’re fun to wear,” Zweihorn says, “and I fully intend on expanding my collection.”