Why I hired a Belgian butcher to circumcise my son 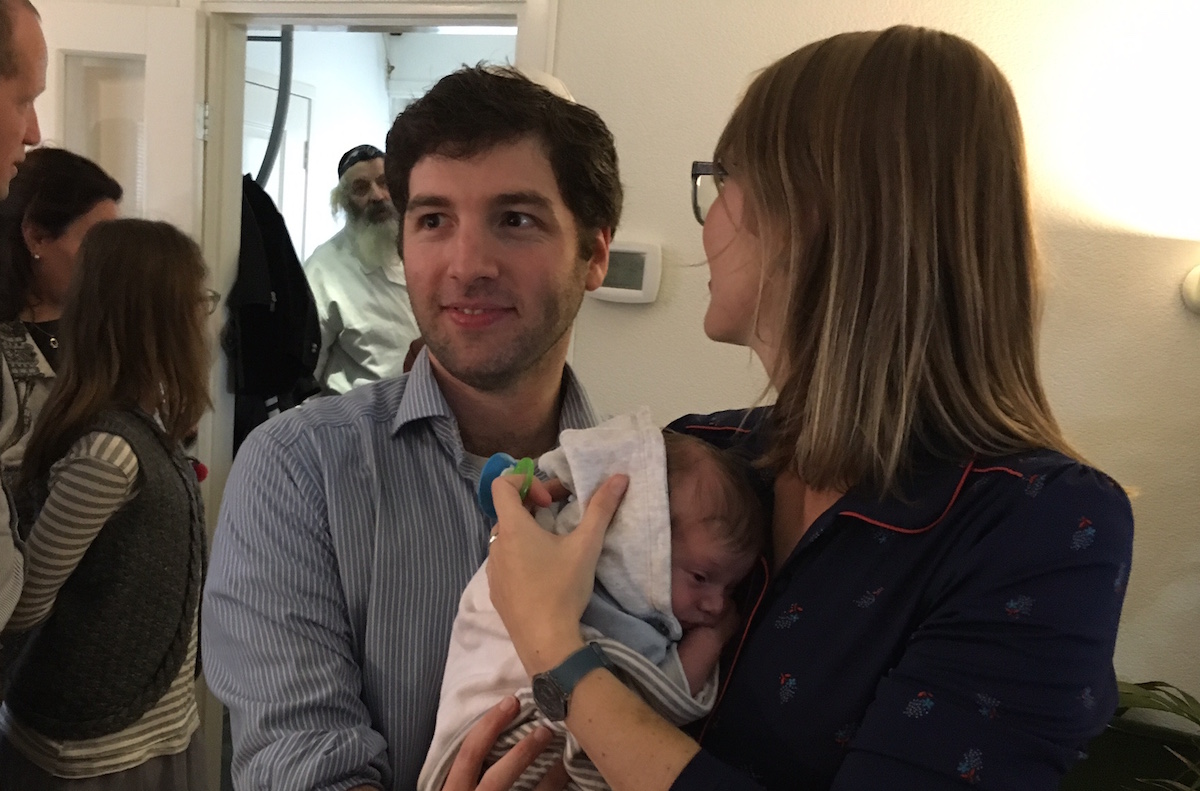 Cnaan Liphshiz and Iris Tzur preparing for the bris of their son in Amsterdam, Nov. 19, 2015. (Courtesy photo)
Advertisement

AMSTERDAM (JTA) — They warn you that parenting means doing a bunch of stuff you never imagined yourself doing.

I had always assumed this applied to saying to children things like, “You watch your tone of voice, young lady” or, “Let’s not eat things we find in our underwear.”

But in my case, the moment came before my son was even born, when I found myself begging a Belgian kosher slaughterer, or shochet, to come to the Netherlands and circumcise him.

In my native Israel or the United States, securing the services of a ritual circumciser, or mohel, is as easy as picking up the phone. But in the Netherlands, where Jews have lived since the 12th century, it can be an ordeal involving international travel, community politics, Holocaust-era trauma and unexpected objections by close family members.

Negotiating these hurdles helped me to fully understand the fears, long expressed by community leaders, that the dearth of religious services pose a long-term threat to communal survival. Indeed, the Conference of European Rabbis last month set up a think tank charged with bettering circumcision and kosher food services to small communities, calling the lack thereof “a major concern.”

On paper, I shouldn’t have had any problems. Circumcision, which was last outlawed here by the Nazis, is perfectly legal in the Netherlands, which has about 40,000 Jews. The country’s Orthodox Jewish communities keep a list of about five mohels, plus a number of Reform physicians who perform circumcisions for their congregants.

But in a country where 50 percent of Jews don’t circumcise their sons, the Reform physicians have much less practical experience with the body part in question. Unimpressed by fancy titles, my wife and I preferred a humble mohel with thousands of foreskins under his belt to a celebrated professor with many diplomas but far fewer penile notches on his.

That proved difficult to arrange. The Dutch one who came recommended had about 1,500 on his meter but had to be flown in at our expense from Israel, where he moved some years ago. So we widened the search to Belgium, where about half the country’s 40,000 Jews are Orthodox.

There we finally found our guy.

“He really knows his meat,” said one of the many people who recommended the shochet to us.

Widely considered one of the best mohels in the region, the shochet accepted in principle. But he needed special permission from the Dutch Jewish community for poaching on their turf — the result of recent “administrative problems” that arose just a few months ago.

“I need it because I don’t want to get in trouble with your people,” the shochet said.

Which is when I started begging.

Ultimately, the shochet agreed to circumcise our son if we cut through the red tape for him. I got on the phone, hoping train traffic would not be interrupted because of the current terrorist threat in Belgium.

The shochet, a hulking and patient rabbi from Antwerp, arrived on our doorstep on Sunday, a few days after the baby’s eighth day, when the ritual is traditionally performed. The bris went off without a hitch, but for a brief moment when the shochet held up the boy briskly to test his strength.

“He’s handling him like a chicken!” an aunt from Brussels exclaimed.

The search left me with many unanswered questions. How could Judaism’s initiation rite be such an ordeal in a country with a Jewish community that dates back more than 800 years? Are these difficulties the cause or the effect of the fact that only half of Dutch Jews circumcise their children, according to a 2009 survey?

Part of the complication, according to Bart Wallet, a historian from the University of Amsterdam who specializes in Dutch Jewry, is the system in which Jews pay annual membership fees (it can reach more than $1,000 per year) in exchange for religious services. Only 20 percent of Dutch Jews are paying members of a Dutch Jewish community, according to Wallet. With Dutch congregations straining to finance Jewish communal life here, there’s little reason to make it easy for people like me, who eschew membership and consume religious services a la carte.

But as with many things in Dutch Jewish life, ultimately it all goes back to the Holocaust. Prior to the war, the Netherlands had 140,000 Jews spread across the country and several traveling mohels servicing far-flung congregations, according to Wallet. After the war, in which 75 percent of Dutch Jews were murdered, the practice fell off.

“Jewish life, including circumcision, never fully restored here,” Wallet said. “Many Dutch Jews skipped the circumcision as a lesson from the past, when their relatives could be identified by taking off their underwear.”

For my Amsterdam-born wife, the Holocaust consideration is a distant second to her main issue with circumcision, namely that it involves causing pain for symbolic reasons. She regards it as a “necessary evil” — necessary only because of my insistence on it.

Some of our relatives here are less resigned. One called me to appeal our decision, citing the main argument used by the European liberals — that it supposedly violates children’s rights. This was the grounds on which a German court enacted a temporary ban on circumcision in 2012, which inspired similar moves in nearby countries. Since circumcision has no real medical benefits, my relative argued, it was not my decision to make.

At our son’s bris, Dutch Chief Rabbi Binyomin Jacobs made a short speech in which he raised this argument in acknowledging what he called the “attack on circumcision” in Europe.

“You don’t ask the baby whether they want to be born, either, but we have them to continue our legacy,” Jacobs countered.

As for me, I told the relative (who himself was circumcised) that circumcision “comes down to tribalism.”

“I respect that,” he replied, “but can’t you just give him a T-shirt or something instead?”