‘Fiddler on the Roof’ — and behind the scenes 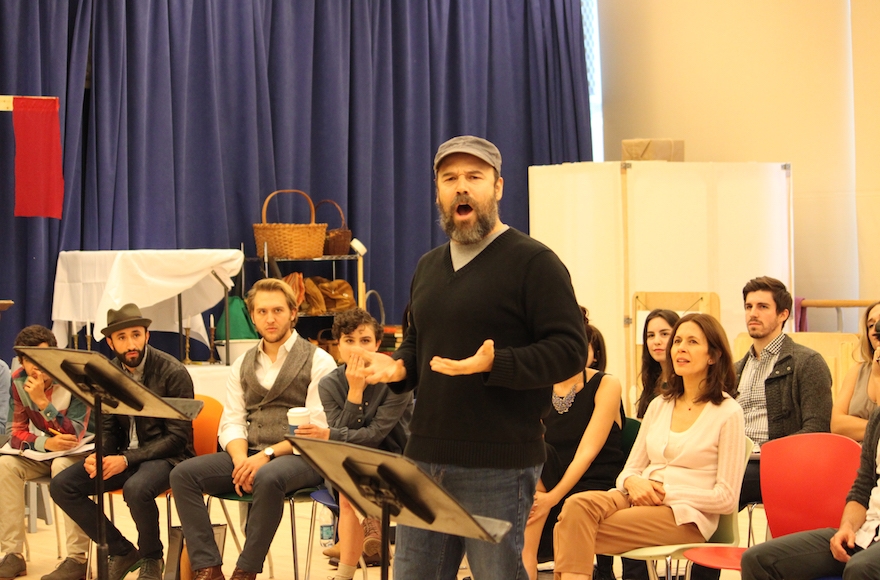 NEW YORK (JTA) — Ever since Zero Mostel imagined himself as a rich man in the original 1964 Broadway production, “Fiddler on the Roof” has been a cultural landmark on Broadway and in the Jewish sphere.

It’s one of those musicals that always seems to be in rotation. Over the years, many a Tevye — from Mostel to Theodore Bikel to Chaim Topol to Alfred Molina — has inspired audiences to reflect on their own traditions, both those sustained and those lost.

Now in previews and set to open on Dec. 20, the newest revival and sixth Broadway production of “Fiddler” features a cast of Broadway veterans like Danny Burstein (“Cabaret,” “South Pacific”) as Tevye and Jessica Hecht (“A View from the Bridge,” TV’s “Breaking Bad”) as Golde, as well as “So You Think You Can Dance” winner Melanie Moore as Chava.

After thousands of stage productions and an indelible movie adaptation, early ticket sales suggest that the public’s interest in the musical have hardly waned.

What makes this revival of “Fiddler” worth seeing? There’s a talented cast, for starters, as well as some new spins on the old tale. From cast Shabbat dinners to surprising sources of inspiration, we give you a behind-the-scenes look at some surprising facts about the current production of “Fiddler on the Roof.”

More than 50 years after he wrote such poignant lyrics as “playing with matches, a girl can get burned,” lyricist Sheldon Harnick is still a presence in the rehearsal room, offering the cast feedback and guidance.

At 91, he’s the only remaining member of the original creative team, which included composer Jerry Bock, book writer Joseph Stein and director-choreographer Jerome Robbins. But Harnick’s still a force: In a video of the sitzprobe — the first rehearsal featuring the cast and full orchestra together — Harnick astounded Burstein by saying this orchestra sounded better than he ever remembered.

Harnick’s remarkably agile, too. When posing for a cast photo at the show’s media event, he instinctively kneeled on the floor next to 20-something cast members. Naturally they insisted he stand, front and center. 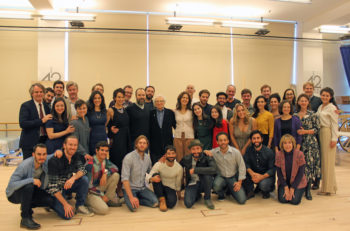 They celebrate Shabbat together.

Early in the rehearsal process, on Oct. 23, the cast and creative team of “Fiddler” had a Shabbat dinner at Mendy’s Restaurant, the classic delicatessen in Midtown Manhattan. It may have been the first Shabbat dinner experience for several of them, but after a few “l’chaims” — and conversations that ranged from personal histories to religion, according to a media representative — they were extended family.

At early rehearsals with the cast, director Bartlett Sher spoke of Syrian refugees and how they serve as an essential access point for both the actors and the audience. The significance of “Fiddler” today, he said, is in relating to people who leave their homes searching for security.

“Currently in Europe, we’re seeing the largest refugee crisis since World War II,” he said at a media event. “Tevye allows us to be in that situation as he figures out how to cope.”

“Fiddler” runs in the family.

Michael Bernardi — who plays Mordcha, the innkeeper, and is also the understudy for Tevye — makes his Broadway debut in this production. He’s the son of Herschel Bernardi, who replaced Mostel as Tevye in the original Broadway production and later reprised the role in 1981.

But the family connection extends another generation: Bernardi’s grandfather performed the stories of Sholem Aleichem in the Yiddish theater. (“Fiddler” is a compilation of several of the writer’s stories, though it takes some liberties with them.)

Look out for some new choreography …

Most “Fiddler” revivals hew closely to the original choreography — but for this production, the Robbins estate permitted more freedom. This has enabled Israeli choreographer Hofesh Shechter — his England-based troupe, Hofesh Shechter Company, is known for modernist, gritty movement set to percussive electronic music — to weave in some contemporary movement. Trained in traditional Israeli and Russian folk dance, Shechter aimed not to redo but to expand Robbins’ iconic dances. The result is a balance of tradition and progress that connects to the musical’s central idea. 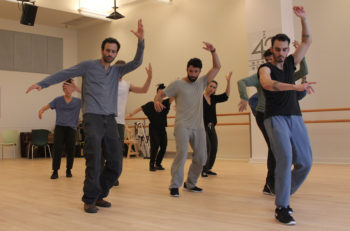 … and some new music, too

Sher has become a coveted director for reviving classics. He’s breathed new life into the works of Rodgers and Hammerstein (“The King and I”) and Clifford Odets (“Awake and Sing!). In each of these productions, Sher researches like a professor: He begins by studying early versions of the script — including songs that were cut and dialogue that was rewritten — in order to build a musical from the ground up.

The result is a production that looks and sounds like the original — yet also feels vital and relevant for a contemporary audience, with some surprises, too: Look out for new music featured in some of “Fiddler’s” dance scenes.