What Americans had to say about Jewish war refugees 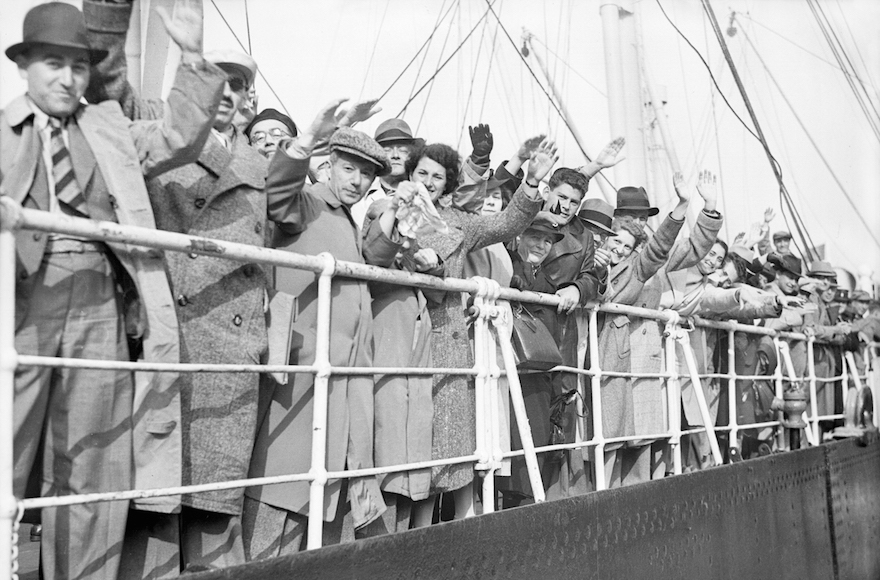 NEW YORK (JTA) – They were called “so-called” refugees, told they were alien to American culture and warned against as potential enemies of the United States.

This heated anti-refugee rhetoric in America was directed against Jews trying to flee Europe, not Mexicans or Syrians. Back in the 1930s and ’40s, the fear was of Nazi and Communist infiltrators sneaking in along with the refugees rather than the Islamic militants or Mexican criminals that some fear today.

Here’s a snapshot of what Americans were saying about Jews as they sought to escape Hitler’s Nazi vise for refuge in the United States.

In 1938, when Hitler’s threat to Jews in Germany already was apparent, America still was emerging from the Great Depression, and xenophobia and anti-Semitism were commonplace. In a July 1938 poll, 67 percent of Americans told Fortune magazine that America should try to keep out altogether German, Austrian and other political refugees, and another 18 percent said America should allow them in but without increasing immigration quotas. In another 1938 poll, cited in the book “Jews in the Mind of America,”some 75 percent of respondents said they opposed increasing the number of German Jews allowed to resettle in the United States.

READ: For Jewish groups, Syrian refugees are a reminder — not a threat

In January 1939, 61 percent of Americans told Gallup they opposed the settlement of 10,000 refugee children, “most of them Jewish,” in the United States.

At the same time, however, 70 percent of Americans said in an April 1944 poll commissioned by the White House that they supported creating temporary safe haven camps in the United States where war refugees could stay until the war’s end. Only one such camp was set up, at Fort Ontario in Oswego, New York; 982 refugees were placed there in August 1944.

Rep. Jacob Thorkelson, a Montana Republican, said Jewish migrants are part of an “invisible government” tied to the “communistic Jew” and to “Jewish international financiers.”

“Let Europe take care of its own people,” he said. “We cannot care for our own, to say nothing of importing more to care for.”

Reynolds told Life magazine he merely wanted “our own fine boys and lovely girls to have all the jobs in this wonderful country,” according to TheIntercept.com.

President Franklin D. Roosevelt himself warned that Jewish refugees might be Nazi spies, coerced to do the Reich’s bidding with threats against relatives back home. At a news conference, Roosevelt explained how refugees – “especially Jewish refugees” – might be forced into service for the Nazis with the threat that if they declined, they would be told, “We are frightfully sorry, but your old father and mother will be taken out and shot.”

Similar warnings against Nazis disguised as refugees appeared in the Saturday Evening Post, Reader’s Digest and American Magazine, according to Reason.com.

America did not take specific action to help Jewish refugees until January 1944, when Roosevelt, conceding to pressure from members of his own government and American Jews, established the War Refugee Board to help rescue Jews in Europe.

Until then, several thousand Jewish refugees had gained admittance into the United States under the German-Austrian quota from 1938 to 1941, which wasn’t limited to Jews. But for most of Roosevelt’s presidency, the U.S. quota for immigrants from Germany went less than 25 percent filled, according to the David S. Wyman Institute for Holocaust Studies. In all, more than 190,000 quota places from Germany and Axis-occupied countries sat unused during the Holocaust.

In 1938, just two weeks after the Kristallnacht progrom, the U.S. interior secretary floated the idea of settling refugees in Alaska, and soon his office began researching the possibility. In March 1940, Sen. Robert Wagner of New York and Rep. Frank Havenner of California proposed bills to resettle 10,000 war refugees in the remote territory who wouldn’t count toward America’s immigration quotas. But the idea ran into opponents in Congress who expressed concerns that “these foreigners cannot be assimilated in Alaska, and will constitute a threat to our American civilization.”

In one of the most infamous incidents involving Jewish refugees, the SS St. Louis, a ship loaded with Jews fleeing the Nazis, sailed to the waters off of Florida in 1939, its passengers begging Roosevelt to enter the country. But Roosevelt said no, and the ship – once close enough for passengers to see the lights of Miami – returned to Europe. Nearly half its passengers would perish at the hands of the Nazis.

Even after World War II, Jewish refugees and displaced persons who wanted to resettle to the United States faced tight restrictions. Overall immigration to the U.S. did not increase after the Holocaust, but in an effort to bypass congressional inaction and help war refugees, President Harry Truman ordered that existing immigration quotas be filled by displaced persons. Under the provisions of the Truman Directive, some 22,950 DPs came to the United States between late 1945 and 1947; two-thirds were Jewish.

In 1948, Congress loosened immigration restrictions to allow 400,000 DPs into the United States. Most of those spots went to Christians, however; only about 20 percent, or 80,000, were Jews.

In all, 137,450 Jewish refugees had settled in the United States by 1952, according to the U.S. Holocaust Memorial Museum in Washington, D.C.

By comparison, more than four years into Syria’s civil war, America has accepted about 1,500 Syrian refugees.