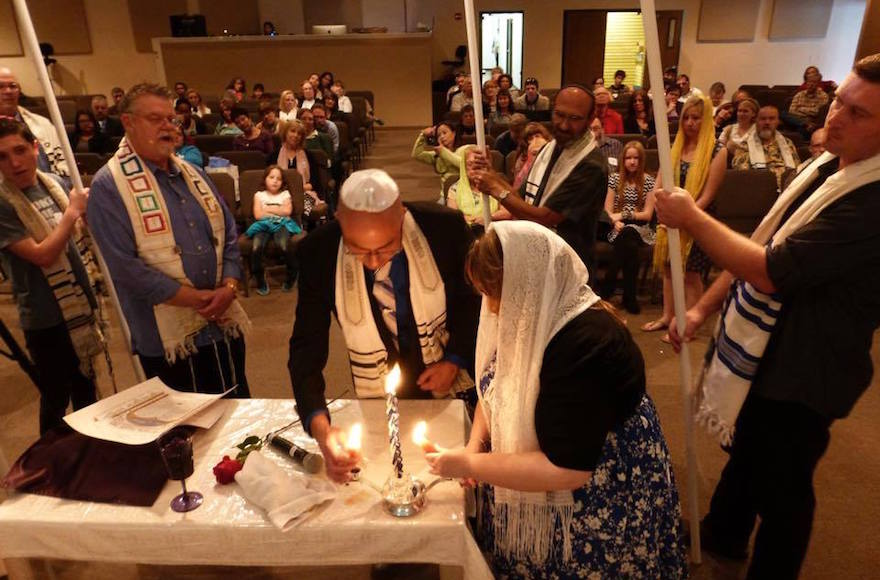 Nicholas Thalasinos renewing his marital vows with his wife at a Jewish-style ceremony, 2013. (Facebook)
Advertisement

(JTA) – While America puzzles over the mass shooting in San Bernardino, California, many American Jews are puzzling over an additional element: the religious identity of victim Nicholas Thalasinos.

Pictured on his Facebook page wearing a scarf-style tallit prayer shawl, Thalasinos, who was killed along with 13 others in Wednesday’s shooting at a center for people with disabilities, has been variously identified in media reports as a Jew, a Zionist and, in some cases, a messianic Jew.

Just two weeks ago, Thalasinos reportedly got into a heated argument about the nature of Islam with co-worker Syed Farook, whom authorities said perpetrated the horrific San Bernardino attack along with his wife, Tashfeen Malik. Investigators announced Friday that they were treating the attack as a terrorist act motivated by Islamic extremism. Both husband and wife were Muslim, and authorities said Malik had pledged allegiance to the Islamic State in a Facebook post.

Thalasinos “knew Syed. He worked with him,” Jennifer Thalasinos, the victim’s wife, told the New York Post. “He knew he [Farook] was Muslim, and with our faith, they may not necessarily have got along.”

What was that faith? Nicholas Thalasinos apparently identified as a messianic Jew, but not as Jewish.

Bat Zion Susskind-Sacks, an Israeli who struck up a Facebook friendship with Thalasinos about a year ago, provided JTA with the transcript of an online conversation she had with him in September. Writing soon after he and his wife renewed their vows in a Jewish-style ceremony complete with huppah canopy and tallit prayer shawls, Thalasinos said: “As a gentile who loves HaShem, I know my place is to support Israel and the Jewish people.”

Thalasinos’ final Facebook post, made early Wednesday, seemed to affirm this identity. In the post, sharing an anti-Semitic message he said he received, he wrote of the alleged sender: “He ALSO assumes I’m a JEW – a great Compliment, I should keep him around for that reason alone!

READ: Messianic Judaism: A sect of Christianity with some Jewish practices (MyJewishLearning)

Here is a message sent to me by the ANTISEMITIC BRAIN SURGEON Med Ali Zarouk:”you will never sucsseed to make a…

Like many Americans who identify as messianic Jews, Thalasinos was not Jewish by heritage and was a believer in Jesus. Though they observe many biblical laws and adopt some Jewish practices and holiday observances, messianic Jews are not accepted as Jews by any of the major Jewish denominations. In fact, despite their name, messianic Jews might be best understood as a kind of Christian, rather than a kind of Jew.

Susskind-Sacks, like many Jews, is irked when people who are not born Jewish and believe in Jesus call themselves messianic Jews.

Thalasinos, who was 52, said in his exchanges with Susskind-Sacks that he was raised a Catholic and “a Pagan,” and that he only came to Jesus later in life. Thalasinos’ wife, who could not be reached by JTA for comment, told the Post he became a “born-again messianic Jew” in 2013. 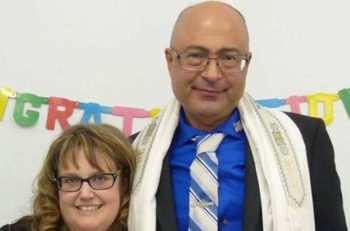 Nicholas Thalasinos posing for a photograph with his wife, Jennifer Thalasinos. (Courtesy)

“When I was in darkness (I was not a Righteous man) I cried out to Jesus (as I mistakenly called Him) and He lifted the veil from my eyes and the weight from my heart,” Thalasinos wrote Susskind-Sacks in September.

When Susskind-Sacks asked why, if he loved Israel and the Jewish people and adopted some Jewish practices, he didn’t convert to Judaism, Thalasinos replied: “I believe in Yeshua (an aspect of G-D that grants Salvation). I will not lie to a Rabbi and let him believe otherwise to do this – no matter how much I want to.”

Thalasinos was by all accounts was an ardent Zionist – or pro-Zionist, as his Facebook page suggested (Susskind-Sacks said she told him only Jews can be Zionists).

“Nicholas was a great supporter of Israel, no question about that. He felt he was put on this earth to follow Hashem and God’s people,” Susskind-Sacks said.

Thalasinos’ wife, Jennifer Thalasinos, told the Post that her husband might have been the person whom media reports said got into an argument with Farook the morning of the shooting.

“He’s very outspoken about Islamic terrorism and how he feels about politics in the state of the country,” Jennifer Thalasinos said of her late husband, who worked for the county as a public health inspector. “So I’m sure he probably had plenty to say to him.”

After the shooting, Nicholas Thalasinos’ Facebook page was flooded with expressions of condolence and grief, with many posts memorializing him with Kaddish, the Jewish prayer for the dead.

Facebook friend Erica Karas said she believed Thalasinos was killed because of his love for Jews and Israel.