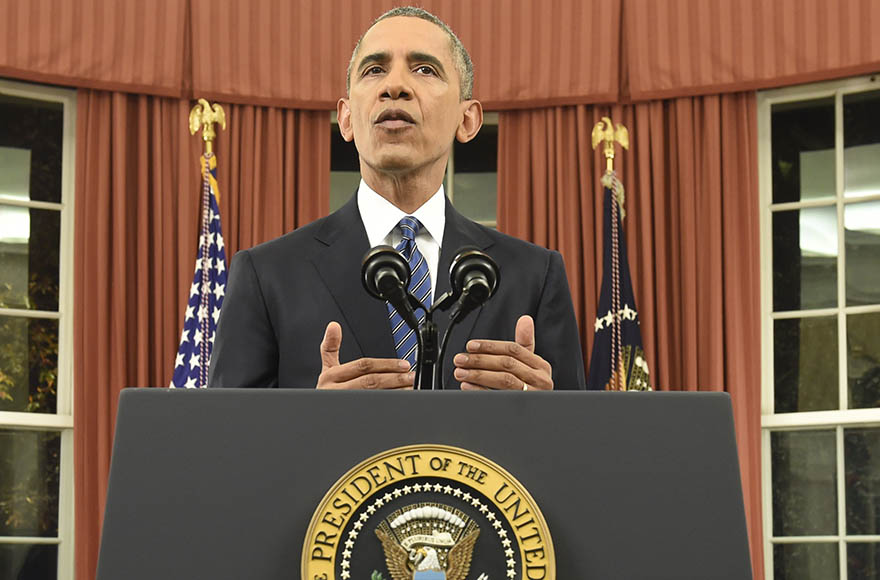 “It is clear the two of them had gone down the dark path of radicalization,” Obama said Sunday, referring to the couple who carried out the attack at a social services center in the Southern California city. “This was an act of terrorism.”

Obama cast the San Bernardino attack, which killed 14 people, as part of a string of deadly attacks by radical Muslims — including in 2009 at Fort Hood in Texas, at the Boston Marathon in 2013 and in Chattanooga, Tennessee, earlier this year — as the clearest signal yet that there is a homegrown threat from radicalized Muslims.

“As the Internet erases the distance between countries, we see growing efforts by terrorists to poison the minds of people like the Boston Marathon bombers and the San Bernardino killers,” he said.

The San Bernardino assailants — Syed Farook, 28, and Tashfeen Malik, 29 — were killed the day of the massacre in a shootout with police.

“The threat from terrorism is real, but we will overcome it,” Obama said. “We will destroy ISIL and any organization that tries to harm us.” ISIL is one of several acronyms for the Islamic State jihadist group.

Obama outlined a series of measures underway that includes airstrikes in Iraq and Syria, intelligence sharing with allies, special operations, cutting off finances for the terrorist groups and training ground troops of countries where the terrorists operate.

The president refused to countenance a war that committed U.S. ground troops, saying it would play into the hands of the terrorists.

“We should not be drawn once more into a long and costly ground war in Iraq or Syria,” he said.

Obama called on Congress to authorize the airstrikes, which would place his actions on sounder legal ground. Additionally, he called on the lawmakers to tighten gun laws, among other proposals, forbidding those on no-fly lists from purchasing guns.

He delivered his statement from the Oval Office, a rare setting for broadcasts and one used by previous presidents to announce military action.

Obama said it was incumbent on moderate Muslims overseas and in the United States to confront extremists among them, but also warned against generalizing a population he called patriotic, noting the many Muslims who serve in the U.S. armed forces.