Netanyahu ‘rejects’ Trump’s Muslim remarks, will meet with him anyway 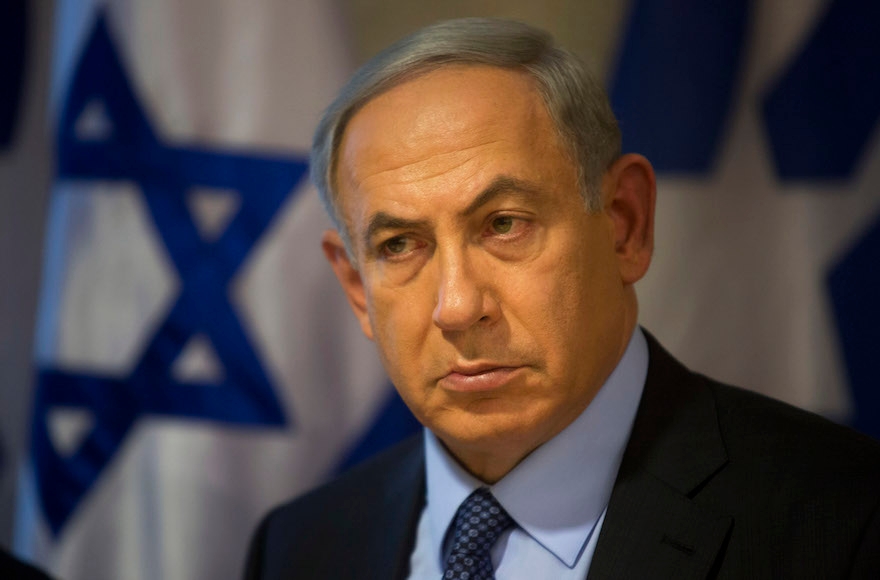 Israeli Prime Minister Benjamin Netanyahu at a news conference in Jerusalem, October 2015. Netanyahu said his policy to meet with all presidential candidates “does not represent an endorsement of any candidate or his or her views.” (Sebastian Scheiner/AP Images)

(JTA) — Prime Minister Benjamin Netanyahu said he “rejects Donald Trump’s recent remarks about Muslims,” but will not cancel his scheduled meeting with the Republican presidential hopeful.

In response to a news release issued by Netanyahu’s office on Wednesday evening, 37 Knesset members signed a petition urging him to cancel the Israel meeting, according to the Times of Israel.

The release did not detail Netanyahu’s objections to the remarks this week by Trump calling for a “total and complete shutdown of Muslims entering the United States.” Republican and Democratic politicians are among the many who have condemned his remarks, including numerous Jewish leaders.

“The State of Israel respects all religions and strictly guarantees the rights of all its citizens,” Netanyahu said in the news release. “At the same time, Israel is fighting against militant Islam that targets Muslims, Christians and Jews alike and threatens the entire world.”

Netanyahu and Trump are scheduled to meet on Dec. 28; the meeting arranged two weeks ago, according to the release. Trump’s remarks this week about barring entry to Muslims have not been his only controversial comments on Muslims. In November the candidate said that if president he would create a database to track all American Muslims.

Netanyahu “decided earlier this year on a uniform policy to agree to meet with all presidential candidates from either party who visit Israel and ask for a meeting,” the release said, adding that the policy “does not represent an endorsement of any candidate or his or her views.”

According to The Jerusalem Post, Trump, in addition to meeting with Netanyahu, is considering a visit to the Temple Mount, a heavily contested site that is holy to both Jews and Muslims.

Taleb Abu Arrar, a Knesset member from the Arab Joint List party, told the Post: “If Trump the racist plans to visit Al-Aqsa, the holiest place in the world for Muslims, to harm the sensitivities of people against whom he incites, he and Netanyahu will be responsible. Such a visit will set the whole region on fire, I am warning.”

In the petition urging Netanyahu to snub Trump, Knesset member Michal Rozin of Meretz wrote: “Their meeting at the end of the month lends support to [Trump’s] racist comments, and in this disgraces the democratic character of the State of Israel and hurts its Muslim citizens.”

While most of the lawmakers who signed the petition belong, like Rozin, to opposition parties, Knesset member Yaacov Margi of Shas and Roy Volkman of Kulanu also signed, according to the Times of Israel.