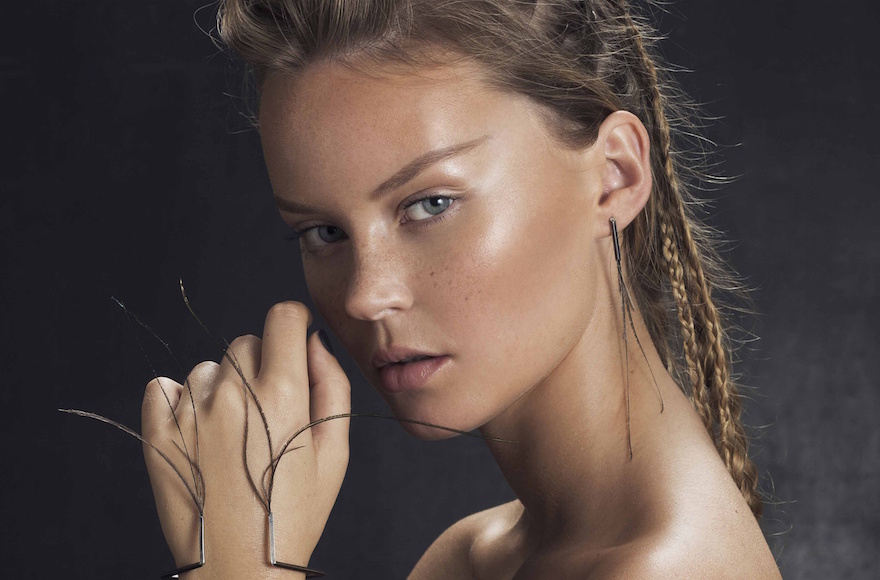 (JTA) — Avigail Alfatov eats her pizza upside down and has funny hiccups. Her favorite food is falafel and she makes her face shine by wiping it with green tea bags.

How do we know this and, perhaps more important, why do we care?

Well, Alfatov is the reigning Miss Israel and is the country’s entry in the Miss Universe Pageant, which airs Dec. 20 on Fox. These are just a few of the fun facts listed on her contestant profile.

She is also a national fencing champion, would love to meet Michael Jordan and has volunteered with Akim, an organization that works with people suffering from intellectual disabilities.

It’s 7:30 a.m. and she’s on the phone with JTA from Las Vegas, where the pageant will be held. (Some activities, such as the swimsuit and evening gown competitions, begin Dec. 16; the grand finale is the Dec. 20 broadcast from Planet Hollywood Resort & Casino.) Alfatov has just arrived from Israel; she’s tired and, as her handler points out, she’s a little nervous about her English skills. So our questioning starts with the easy stuff, her background.

“My parents were born in the Ukraine and came to Israel,” she says. “I was born in Israel. We are not very religious.”

They emigrated because “to be Jewish in other countries is not good, so they didn’t want me to be born in this place [Ukraine].”

Her father is a graphic designer, her mother a teacher. Alfatov was raised in Acre, a coastal community and one of the oldest continuously inhabited cities in the Middle East. Its population is a mix of Jews, Muslims, Christians and Bahais.

Acre is also the place where the Israeli Olympic fencing team trains, she says, and every school in town teaches fencing.

“I really liked it and continued,”Alfatov says.

“Continued” is putting it mildly. She is the national youth champion in Israel and hopes — nay, expects — to be part of Israel’s 2020 team in Tokyo.

She is  in the Air Force, handling “security of information,” which has something to do with computers. Alfatov has another year to go and then hopes “to study in university and keep going with fencing.”

“I know it can open many doors,” she says. “I also learn a lot about myself, and [the international experience] shows me how it’s going to be in my dream job.”

She’s already got a leg up in giving diplomatic answers: Acre is a place where “Muslims and Jews live all together,” she says. “I have neighbors who are Arabs. It’s all good.”

“It’s all good” is a regular refrain from the 19-year-old. For example: Has the current spate of attacks upon Israelis impacted her at all? “When I’m walking in the streets, I’m used to it,” she says.” My city is a safe place. You can’t worry. I’m all good.”

Is she concerned that representing Israel in the current political climate might hurt her chances of winning? “No, I don’t worry,” she says. “I don’t think about it.”

At last year’s Miss Universe, there was a significant kerfuffle over a photo of Miss Israel, Doron Matalon, and Miss Lebanon, Saly Greige. The latter was threatened with the loss of her title, but quickly apologized and claimed the Israeli photobombed the selfie.

Alfatov remains nonplussed. “I didn’t know about that,” she laughs.

So all that’s left is to figure out why she uses green tea bags in such a manner.

“The antioxidants,” she says. “It makes my face smooth.”