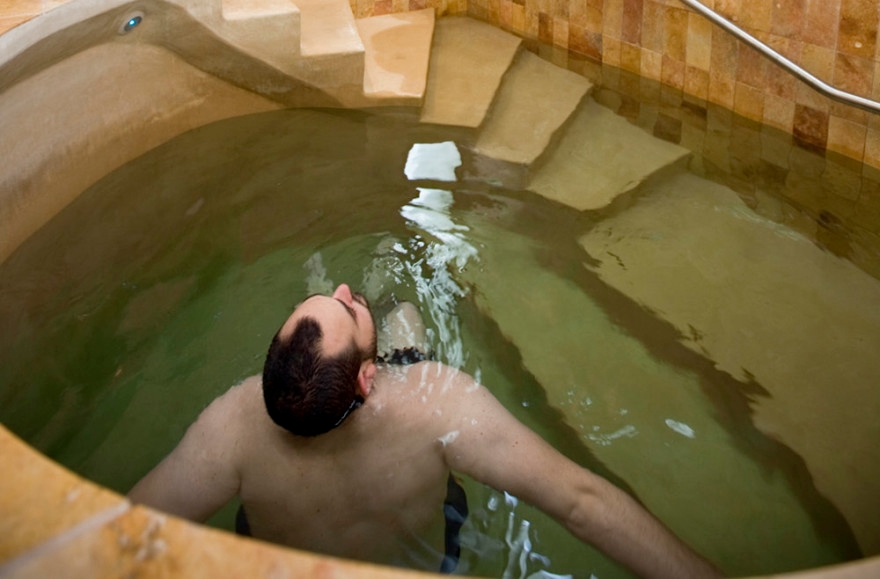 A man using the mikvah at Mayyim Hayyim, a community ritual bath in the Boston suburbs. (Courtesy of Mayyim Hayyim)
Advertisement 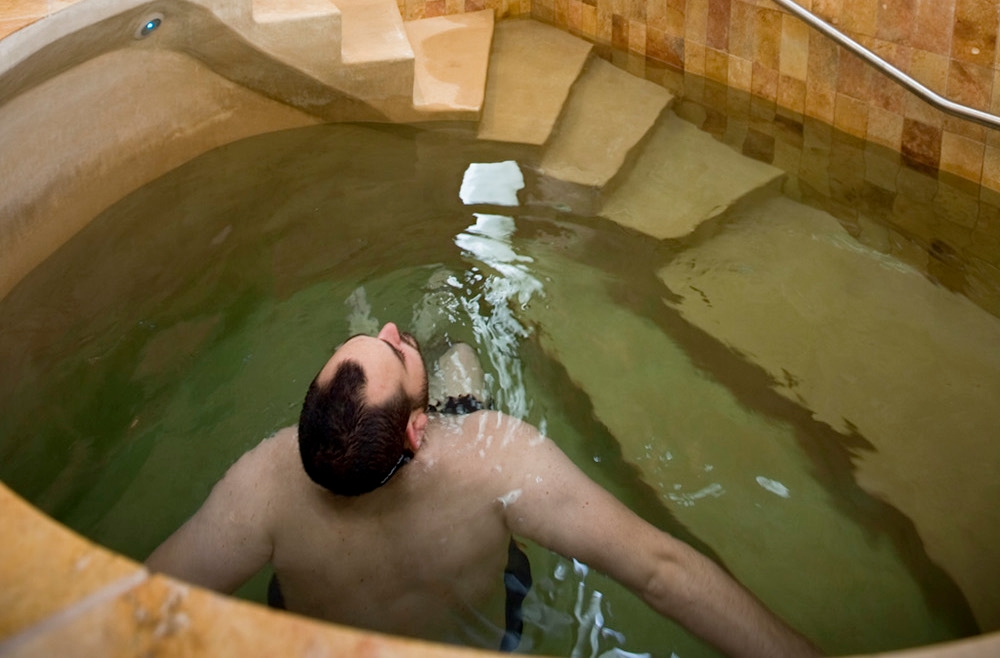 A man using the mikvah at Mayyim Hayyim, a community ritual bath in the Boston suburbs. (Courtesy of Mayyim Hayyim)

As for many observant Jewish women, it’s the night each month that Janet Ozur Bass immerses in the mikvah ritual bath following menstruation. Once she emerges from the water, husband and wife may resume the physical intimacy traditionally forbidden while a woman is menstruating.

But in the Ozur Bass household, mikvah night is double duty: Instead of just Janet going, her husband, Henrique, immerses in the mikvah, too.

“I can’t begin to tell you how spiritual it is,” Henrique Ozur Bass told JTA.

“Mikvah is not about a blood taboo; it’s the time of the month that women are more like God in that they are getting ready for creation,” he said. “And they can’t do it alone. I recognize that I am a partner with my wife in creation, and that is what further motivated me to follow her cycles.”

Ozur Bass is one of a small but growing number of Jewish men who have adopted the practice of monthly mikvah immersions in tandem with their wives’ menstrual cycles.

Mikvah use by men is not new. Men long have gone to the mikvah before their weddings, and some visit the mikvah as spiritual preparation before major holidays. Many Hasidim immerse before every Sabbath. Jewish law requires mikvah immersion – for men and women – as part of the conversion process.

In recent years, American Jews also have begun using mikvah immersions to mark milestone occasions like bar or bat mitzvahs, miscarriages or divorce. Some couples go to the mikvah when they’re trying to conceive.

But regular monthly mikvah use by men in correlation with their partners’ cycles, known in Hebrew as niddah, has been almost unheard of.

Naomi Malka, the mikvah director at Adas Israel, a Conservative congregation in Washington, said a core group of about 10 men have begun to do it off and on. Mayyim Hayyim, a pluralistic mikvah in the Boston area, has had 18 men use the facility for monthly immersions since it opened in 2004, according to the organization’s records.

“It’s becoming increasingly common,” said Carrie Bornstein, Mayyim Hayyim’s executive director. “When we talk about egalitarian practice in Judaism, our minds immediately go to women’s practice. I think it’s exciting and interesting to see men taking on practices that traditionally have been the domain of women.”

To be sure, monthly male mikvah use is still a fringe phenomenon. But its emergence is a sign of the degree to which modern Jews are reimagining traditional rituals, the lengths to which some couples are going to practice egalitarian values and the rising interest in mikvah use generally among American Jews.

Michael, a 29-year-old man in the Boston area who asked that his last name be withheld for privacy reasons, told JTA he began going to the mikvah every month at the request of his fiancee when they moved in together.

“She said that since we’re living together now, she wanted to go to the mikvah every month, as that was her mother’s practice and her family’s practice,” Michael said. “I knew the concept, but I honestly didn’t know much about it.”

Women who go to the mikvah typically immerse naked after cleaning their body of any stray hairs or dead skin, and traditionally a witness is present to ensure the immersion is complete. There is an accompanying blessing, and the custom is to submerge three times. (A mikvah is any naturally derived body of water of at least 150 gallons. While lakes and oceans qualify, most Jews use specially constructed indoor mikvahs.)

Men who use the mikvah monthly have adapted the ritual in different ways. Ozur Bass, who has been doing it for 23 years, says he submerges four times, each time facing a different direction while meditating over one of the four Hebrew letters of God’s name. When he’s done, he sings the “Yedid Nefesh” hymn, traditionally sung before Friday evening prayers. He says a blessing beforehand but has no witness.

Some couples try to serve as each witnesses for each other, when possible; few mikvahs permit simultaneous use by men and women.

When Rabbi Ben Shalva and his wife decided to adopt the practice, he was in Conservative rabbinical school and the two were living in Israel with their infant son. Knowing it would be impossible to find a mikvah in Jerusalem that would allow tandem immersion, they would drive to the Tel Aviv beach once a month, find a secluded area and immerse in the waters of the Mediterranean Sea – each holding the other’s swimsuit when they dunked while somehow keeping an eye on the beach where their 1-year-old watched from his stroller.

“It was a little fun and crazy and beautiful, too, and it felt every time like a rebirth,” Shalva said.

Things got easier when they moved to Boston and began going to Mayyim Hayyim, which allows tandem dunking. Sometimes they even brought their kids and then frolicked in the water all together once the ritual dunking was done. Shalva said they gave up monthly mikvah after about five years, owing to changing religious priorities, a move to Virginia and logistical challenges.

READ: For some Orthodox converts, biggest challenges come after mikvah

Rabbi Joel Roth, a professor of Talmud and Jewish law at the Jewish Theological Seminary, said that when he used to lecture students on sexual issues during the 1980s and ’90s, he suggested that men consider adopting mikvah immersions to add a spiritual dimension to niddah observance. Roth, now 75, said he used to practice it himself.

“My motivation was to increase the observance of ‘taharat hamishpacha’ in the Conservative movement, and I saw men’s mikvah observance as preparation of the soul for the resumption of marital intimacy,” Roth said, using the Hebrew term for the observances surrounding menstruation. “Occasionally I would get questions addressed to me that were a fairly good indicator that people were doing what I suggested, but I have no idea how many people did it.”

Nowadays, many men who don’t go to mikvah are nevertheless adopting other novel practices during the seven “clean” days following menstruation, the period women traditionally wait before their monthly immersion, focusing on emotional intimacy rather than just abstaining from sex, said Fruchter of ImmerseNYC.

“Understanding mikvah as a partnership practice is becoming more widespread, not only among egalitarian couples but also modern Orthodox people,” said Fruchter, who is also studying to be an Orthodox clergywoman at Yeshivat Maharat in New York.

“One man I know prepares music for his wife to listen to when she’s at the mikvah and preparing,” Fruchter said. “Another couple has a special dinner during the seven clean days where they talk about something difficult. I encourage couples to make it a specific time to work on something in their relationship.”