In an ultra-wealthy Moscow suburb, a luxurious JCC opens its doors 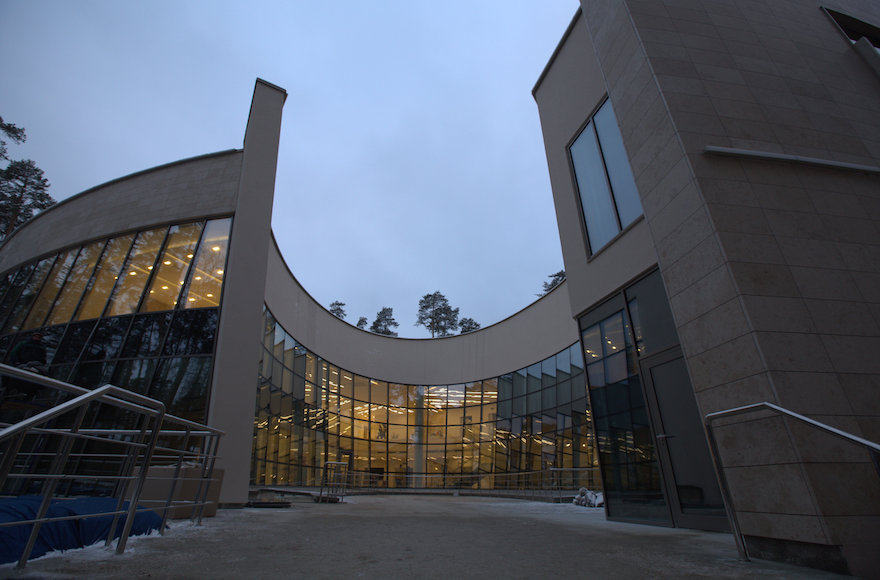 ZHUKOVKA, Russia (JTA) — On the only road connecting this affluent village on Moscow’s western outskirts, Russian secret service agents are blocking all inbound traffic. Drivers bound for Zhukovka pull over and step out to smoke while chatting with other motorists as a line of luxury cars grows on the shoulder of a two-lane road.

The closures are a frequent occurrence because Zhukovka and the adjacent riverside village of Barvikha are home to some of Russia’s richest and most powerful people. Among the combined 5,500 residents living in the villages are Ukraine’s ousted president, Viktor Yanukovych, who has a $52 million mansion in the area, and the Russian Jewish construction magnates Boris and Arkady Rotenberg. All three are associates of Russian President Vladimir Putin.

“Ordinary” millionaires who live here must wait patiently as VIPs travel in motorcades to and from Moscow, or receive visits by senior officials. So do the tourists who come here to catch a glimpse of the village’s sprawling villas, with their private tennis courts and hedge mazes.

But this month Muscovites, and Jews especially, received a more accessible attraction in Zhukovka: A $20 million Jewish community center and synagogue opened here on Dec. 6 amid fanfare and in the presence of 400 guests, including Israel’s chief Ashkenazi rabbi, David Lau. And while the new JCC is seen as a demonstration of this community’s robustness, it nonetheless comes amid growing Jewish emigration that is widely attributed to the financial crisis in Russia and concern over its government’s nationalist agenda.

From the international design firm Gensler, the Zhukovka JCC is a doughnut-shaped structure with a granite facade, 54,000 square feet of floor space, a small cinema and 24 luxury guest rooms that are intended to be used free of charge by Shabbat overnighters.

READ: At Crimean Holocaust event, a chance to burnish Russia’s image as defender of minorities

At the heart of the building is a synagogue with a capacity of 400 worshippers and modular tables made of Swedish wood. The basement has still-unfinished, warm-water mikvah ritual baths. The building is under the watchful eye of 24/7 security guards, who operate airport-grade body and luggage scanners. The basement of the center, which was built with money donated by wealthy Jews (and some non-Jews), has a gourmet kosher restaurant. Its kitchen is overseen by two Italian chefs, including the renowned restaurateur Uilliam Lamberti. 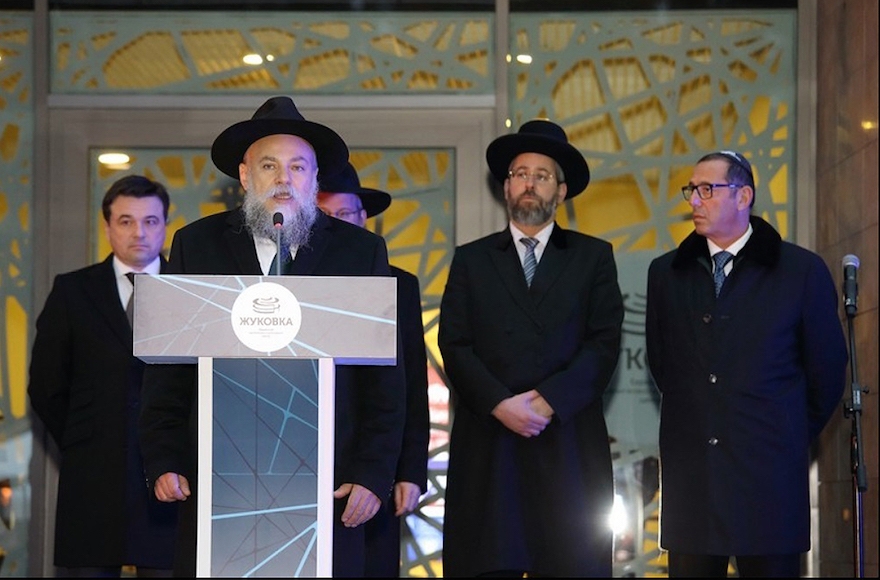 Rabbi Alexander Boroda speaking at the opening of the Zhukovka JCC, Dec. 6, 2015. (Courtesy of The Federation of Jewish Communities of Russia)

Among the first-time visitors to the center last week was Oleg Babinski, a retired army officer and business owner in his 50s who worships with the Zhukovka Jewish community, though he does not live in the village.

“I am not a rich man, but it still fills me with pride to see that our community can achieve something like this,” Babinski said.

Such a building would stand out almost anywhere else in Russia, where the average monthly salary among city dwellers is less than $600. But it’s par for the course in Zhukovka, where the shopping malls have Gucci and Prada stores, and there are a host of luxury car dealerships

At one mini-mall this year, local Jews placed a large menorah opposite a Bentley dealership.

No one knows exactly how many Jews live in and around Zhukovka. But it’s doubtful there are enough to fill the synagogue.

“Granted, this place is a little big for the community’s needs right now, but it’s with an eye to the future needs of a growing community,” said Velvel Krichevsky, a Chabad rabbi from Israel who will be working at Zhukovka.

The head rabbi at Zhukovka is Alexander Boroda, the president of the Chabad-affiliated Federation of Jewish Communities of Russia, a vast network whose rabbis have formed a main engine for the renewal of Jewish life in Russia after the fall of communism. Among those rabbis is Berel Lazar, one of two chief rabbis in Russia. Lazar is known for his close ties to Putin — the two men lit Hanukkah candles together at the Kremlin on Dec. 9.

Federation ties with Russian politicians have been instrumental in obtaining land and some funding for opening dozens of Jewish institutions across Russia, though the Zhukovka center became a reality without such aid. The decision to build a Jewish center in Zhukovka came at the request of wealthy area Jews, according to Boroda. 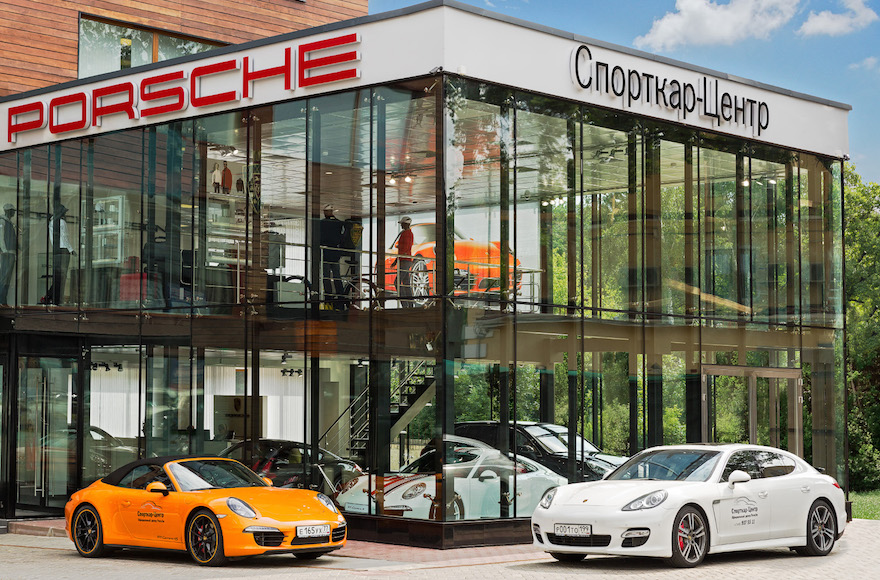 A Porsche auto dealership in Zhukovka. (Courtesy of The Federation of Jewish Communities of Russia)

“My friends asked for a synagogue near their home, and I wanted to open a Chabad house somewhere, so that’s why it happened there,” said Boroda, a former Red Army soldier who began exploring his Jewish identity after his discharge from the military in the 1980s.

Still, there is symbolism in the center’s opening in Zhukovka. The village, after all, used to be the resort destination of Russian Communist government leaders — the Soviet statesman Vyacheslav Molotov and Joseph Stalin’s daughter used to live here — who persecuted Russian Jewry and effectively drove it underground.

READ: Putin’s Jewish embrace: Is it love or politics?

“This is going to be really great in summer,” said Rosa Skvortsov, 10, of Zhukovka, who attends the Reshit Chochma Litvak religious school in Moscow. Rosa visited the center last week with her father, Vasily, a film director, and a friend.

But the new center’s future is by no means certain. Built with funds collected over years, it opened at the height of a financial crisis that since August 2014 has halved the ruble’s value against the dollar amid dropping oil prices and Western sanctions over Russia’s annexation of Ukrainian territory.

Although many Jews are assured by Putin’s pro-Jewish policies, others are jittery over his overt nationalism and expansionism, as well as his government’s xenophobia toward gays and Muslims. The combination has already generated a 31 percent year-over-year increase in Jewish immigration to Israel, or aliyah, from Russia, which is home to about 260,000 Jews. In 2014, some 5,921 Russian Jews made aliyah, compared to 4,094 the previous year.

According to Natan Sharansky, the chairman of the Jewish Agency for Israel, which facilitates aliyah, there’s been a rise in the number of Jews moving to Israel from Moscow and St. Petersburg, where Russian Jewry’s intellectual and financial elites tend to live, and where Jews used to be more resistant to leaving than their coreligionists in poorer areas.

These developments already are affecting the fundraising ability of Jewish groups. In Zhukovka, the congregants who asked Boroda to build the center “have all left, some to Europe, others elsewhere,” the Zhukovka rabbi said.

Still, Boroda insists that others have replaced those who have departed and his community will continue to raise enough money to maintain its infrastructure, including the high-maintenance center in Zhukovka.

“You don’t build a synagogue according to this year’s balance sheet,” he said.

And while emigration may be on the rise, Boroda added that “Russian Jews as a whole are never going to let go of what we have achieved just because of a few rough years.”

(Cnaan Liphshiz traveled to Russia to receive a journalism award from the Federation of Jewish Communities of Russia. The federation did not pay for his trip and had no role in the editing or writing of this article.)