What Jewish groups have (and haven’t) said about Donald Trump 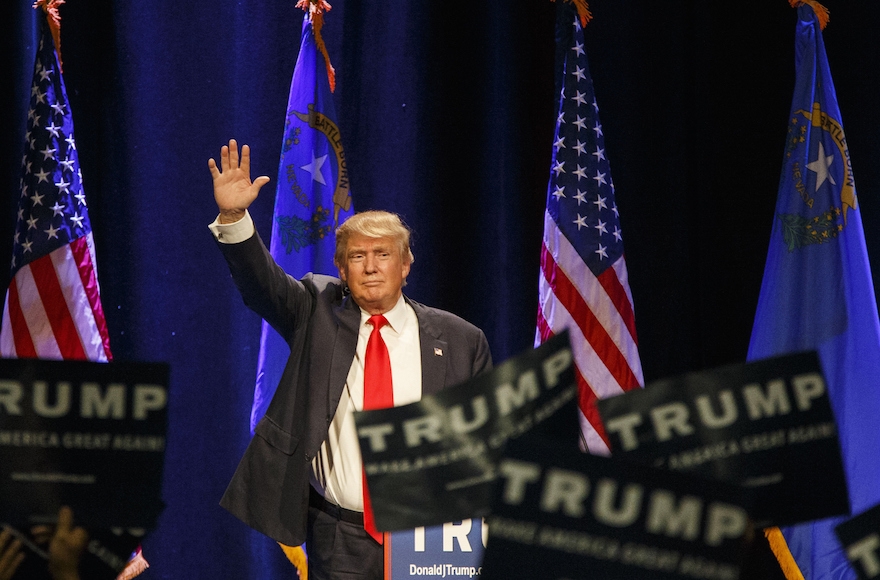 NEW YORK (JTA) – Donald Trump’s call last week to bar all Muslims from entering the United States “until our country’s representatives can figure out what is going on” has set off a deluge of criticism in America and around the world, from U.S. House Speaker Paul Ryan to Israeli Prime Minister Benjamin Netanyahu.

“Prime Minister Netanyahu rejects Donald Trump’s recent remarks about Muslims,” Netanyahu’s office said in a statement. “The State of Israel respects all religion and strictly adheres to the rights of all its citizens.”

Anti-Defamation League CEO Jonathan Greenblatt: “A plan that singles out Muslims and denies them entry to the U.S. based on their religion is deeply offensive and runs contrary to our nation’s deepest values.”

B’nai B’rith International: “Singling out an entire religious community for diminished rights amounts to bigotry, and it should not be accepted.”

Jewish Council for Public Affairs, the public affairs arm of the organized Jewish community: “There is no place in America, a nation founded on religious freedom, for discrimination on the basis of religion — or any other immutable characteristic, for that matter. … Recent statements are misleading to voters, because they imply that sacrificing our values will advance our security, which is a fallacy.”

Conference of Presidents of Major American Jewish Organizations, the umbrella organization of the American Jewish community on foreign policy matters, did not issue any public statement after Trump’s remarks. But reached by telephone, Executive Vice Chairman Malcolm Hoenlein told JTA, “Obviously we reject what he said. It’s a given.”

Orthodox Union Executive Vice President Allen Fagin: “We call on all Americans to reaffirm that discrimination of any group solely upon religion is wrong and anathema to the great traditions of religious and personal freedoms upon which this country was founded.”

Rabbinical Council of America (Orthodox) President Rabbi Shalom Baum: “The complex issues that face us in ensuring the safety and security from terror of innocents and free societies throughout the world need to be addressed, but need to be done in sober and responsible ways. We call upon all Americans and the United States government to recognize the threats posed by radical Islamists, while preserving and protecting the rights of all people who seek peace, no matter how they worship God.”

Rabbinical Assembly (Conservative): “We recognize the need to be vigilant in providing security and protection from those who seek to do our country harm, but discriminating against an entire religion is wrong and dangerous.”

Religious Action Center of Reform Judaism Director Rabbi Jonah Dov Pesner: “While we take no position on Mr. Trump’s candidacy for president, we condemn in the strongest terms his comments calling for barring the entry of Muslims into the United States. As Jews who too often suffered persecution because of our faith, we cannot abide religious bigotry.”

Reconstructionist Rabbinical Association: “We call on all Jews and all Americans to denounce hate speech and fear-mongering against Muslims in politics and the media, and to reach out in support of Muslim Americans in every way that we can.”

J Street, the “pro-Israel, pro-peace” lobbying group that has positioned itself as a left-wing alternative to AIPAC: “Donald Trump’s statement today calling for a ‘total and complete shutdown’ of Muslim immigration to the United States is repugnant and unacceptable. This statement is the latest in a string of deeply bigoted and Islamophobic remarks by Mr. Trump and others seeking to stoke and take political advantage of rank hatred.”

National Jewish Democratic Council: “It is long past time for leading Republicans, especially Jewish Republicans, to strongly speak out against the bigotry coming from its leading candidate. No single religion is our enemy — terrorists and all those who seek to destroy us are our enemies.”

Which Jewish groups of note have not responded?

AIPAC – the American Israel Public Affairs Committee: The nation’s premier pro-Israel lobbying group does not frequently make public statements on matters not directly connected to the initiatives it backs in Congress. But the organization occasionally does wade into partisan political waters. Back in March, AIPAC in a statement applauded Netanyahu’s controversial speech to Congress warning of the perils of the Iran deal. (Netanyahu consulted with Republicans in Congress, but not the White House, when scheduling his congressional address.) And three weeks later, when Netanyahu reaffirmed his commitment to a two-state solution after vowing during Israel’s election campaign days earlier that a Palestinian state would not emerge on his watch, AIPAC issued a statement expressing dismay that Obama administration officials expressed skepticism of Netanyahu’s seeming about-face. On Trump, AIPAC has been silent; a spokesman told JTA the organization’s focus is U.S.-Israel relations.

Zionist Organization of America: This group on the right end of the American Jewish political spectrum on Israel rarely misses an opportunity to promote its views, issuing statements on everything from what public officials fail to say (Dec. 10: U.N.’s Ban Ki-Moon Condemns Terror Attacks On Civilians in Many Countries – But Not In Israel) to little-noticed initiatives the organization itself undertakes (Sept. 25: ZOA Testifies to U. Cal. Regents: Adopt State Dept. Def. of Anti-Semitism). While the ZOA has not addressed Trump’s call to bar Muslims entry to America, the organization issued a statement about Syrian refugees after Trump made his comments. “ZOA: Don’t Bring ISIS/Terrorist Infiltrated, Hamas Supporting, Jew-Hating, Syrian Muslims Into the U.S.,” reads the headline of ZOA’s Dec. 8 news release. “The Zionist Organization of America (ZOA) strongly opposes bringing more Syrian Muslim ‘refugees’ into the United States,” wrote the group’s president, Morton Klein. “Syrian immigrants pose a grave danger to all Americans – and an even greater danger to American Jews, for a host of reasons.”

Republican Jewish Coalition: The nation’s premier Republican Jewish group has opted to stay silent on the remarks by Trump, who has led the Republican presidential field in national polls for most of the past few months. RJC officials did not respond to a JTA request for comment.

Jewish Federations of North America: While the umbrella group for North American Jewish federations tries to stay out of the partisan fray, it has weighed in on political matters when it felt the issue merited it. For example, on Dec. 10, JFNA rebuked Israel’s chief rabbi for criticizing an Israeli politician’s visit to a non-Orthodox Jewish day school in New York. In its statement, JFNA said: “Israel’s Ashkenazi Chief Rabbi David Lau was wrong to criticize Minister Naftali Bennett for the latter’s visit to a Solomon Schechter community day school in Manhattan.” On Trump, JFNA has issued no statement, and a representative told JTA it has no plans to do so.