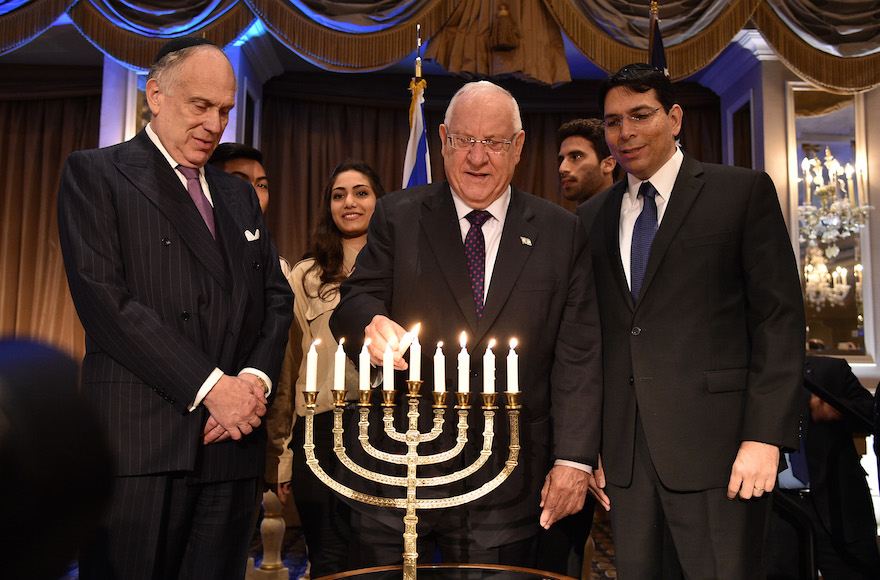 Reform leaders on Sunday sent an open letter to Prime Minister Benjamin Netanyahu that would have been next to unthinkable just last year.

Along with decrying a “worrying escalation of incitement,” the leaders praised a man they only recently condemned: Israeli President Reuven Rivlin.

“The president’s personal commitment to the values of democracy and Judaism are a source of strength for Israel,” the letter said. “We look forward to your strong defense of the role of NGOs and Israeli presidency generally and a condemnation of incitement against President Rivlin specifically.”

That Reform leaders oppose incitement against the president is no surprise. That they lavish him with warm words is a major shift.

Ahead of Rivlin’s election last year, Reform leaders voiced indignation over Rivlin’s past statements denigrating Reform Judaism. In 1989, Rivlin described an American Reform service as “idol worship and not Judaism.” In the past, he had declined to refer to Reform rabbis as rabbis and derided non-Orthodox approaches to Judaism.

“He’s a traditional Jew who isn’t sympathetic to Reform,” former president of the Union for Reform Judaism Eric Yoffie told JTA last June. “That hasn’t changed. But I do expect candidates for president to act in an appropriate and respectful manner to all elements of the Jewish world.”

So what changed? According to Gilad Kariv, CEO of the Israeli Reform movement, Rivlin has spent the past year-plus as president reaching out to non-Orthodox Jews and speaking out against discrimination.

Rivlin met with Rabbi Rick Jacobs, Yoffie’s successor, in Israel last year and followed-up with a phone call, addressing the Reform leader as “rabbi.” He lit the menorah with St. Louis Reform Rabbi Susan Talvie at this year’s White House Hanukkah party. He met with Reform and Conservative leaders on his trip to the U.S. this month. In July, he held a study session with Reform and Conservative rabbis.

“We must not forget for a moment that fierce debates are the sincere and genuine expression of a concern for us all – Orthodox, Reform, Conservative and secular – for the present day, and for the future of the Jewish people,” Rivlin said at the study session.

The gestures have convinced Kariv that Rivlin is as sincere in his desire to reach out to Reform Jews as he is in his quest to reconcile Jewish and Arab-Israelis. Moreover, Reform leaders appreciate that their anti-racism fight now has the vocal backing of Israel’s head of state.

“Since he became president, he adopted a very respectful and embracing approach to us,” Kariv told JTA. “We very much support his stance against extremism from all sides. We are very impressed that, since he entered the role, he’s taken on the mission to connect the different communities. We see him playing a very positive role in Israel.”