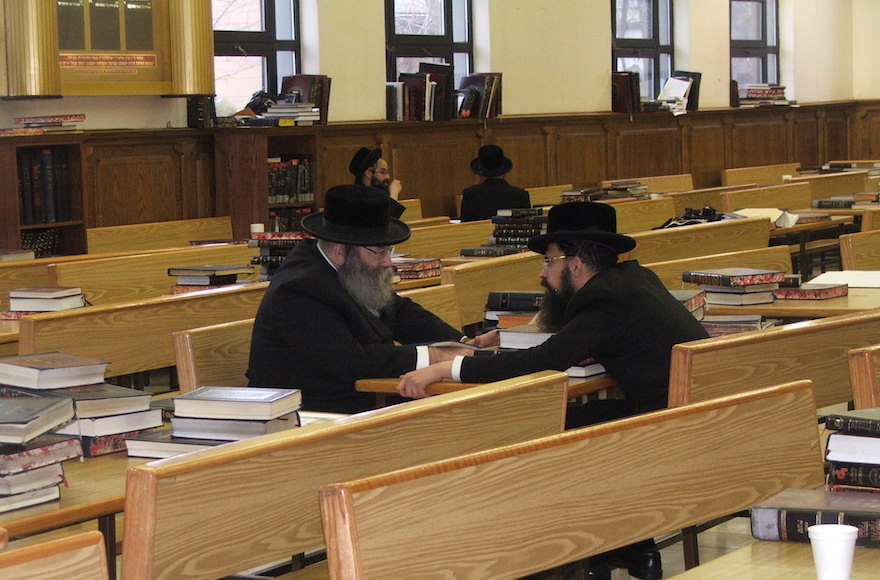 The beit midrash study hall in the Hasidic village of New Square, N.Y., is virtually empty on the afternoon of Christmas Eve, known as Nittel Nacht. (Uriel Heilman)
Advertisement

NEW YORK (JTA) – Christmas is a day like any other in most Hasidic neighborhoods in New York: Children go to school, shops are open, and tinsel and holly are nowhere to be seen.

But Christmas Eve occupies a special place on the Hasidic calendar as a kind of “silent night,” when beit midrash study halls fall silent.

Known as “Nittel Nacht,” the hours leading up to Christmas include a few peculiar traditions in Hasidic communities. It’s one of only two times during the year when Torah study is avoided (the other is the summertime fast day of Tisha b’Av). Couples traditionally abstain from sex. Yeshiva students are encouraged to engage in such “kosher” secular activities as playing chess or doing household chores.

And when it’s over – at the stroke of midnight, the same time many churches hold Midnight Mass – Hasidic study halls come alive when a community leader bangs on a lectern to signal the resumption of Torah study.

“Two minutes before midnight, everybody stands with their Gemaras [Talmuds] open, ready to learn,” said Yaakov Yosef Braun, a native of New Square, a Hasidic village in Rockland County about a 45-minute drive from Manhattan. “It’s like a race is about to begin. It’s really something to see.”

The origins of Nittel Nacht customs are murky, and even the name itself is a matter of some debate.

While “nacht” is Yiddish for night, variations on the origins of “nittel” range from the Latin for “the birth of our god” to the Hebrew acronym for the words meaning “born on the ninth of Tevet” — a reference to the time of Jesus’ birth.

Historically, Christmas Eve was a fraught time for Jews who lived among Christian populations in Eastern Europe and Russia, a night when Jews sought to keep off the street for fear of violence by Christian celebrants. This, say some community experts, is why study halls were kept closed and mikvah ritual baths were shuttered (preventing women finishing their menstrual cycles from immersing and resuming intimacy with their husbands).

Others cite spiritual reasons for avoiding Torah study on Christmas Eve. Those who saw belief in the Trinity as a form of idolatry believed Christmas Eve was a time when dark forces were about, rendering it unfit for the purity of Torah study. Others say Torah study was avoided on this night so that the heavenly merit of Torah learning would not be accrued by Jesus or those celebrating his birth, or somehow benefit the souls of the wicked.

Some cite the opposite reasoning for the custom of learning Torah beginning at midnight on Christmas: If the Christians are awake worshipping God at that time, the Jews by comparison shouldn’t be asleep at the wheel.

“If the Jews are asleep, the bad angels are criticizing the Jews: How come you’re not worshipping me when they are? Why aren’t you learning Torah?” said Yosef Rapaport, a Vishnitzer Hasid and media relations coordinator for Agudath Israel of America.

In New Square, where Skverer Hasidim observe the 12-hour “grosser Nittel” (“big Nittel”) on Jan. 6, Braun says many of his fellow Hasidim use the hours when Torah study is off-limits to catch up on household work, like fixing leaky faucets. In some Hasidic households, Nittel hours apparently used to be spent ripping toilet paper – once a necessary household chore among the strictly Orthodox who don’t rip toilet paper on the Sabbath. Today, however, the manufacture and sale of pre-ripped toilet paper has made that Nittel task unnecessary.

Perhaps the most common Nittel observance is sleeping. With study halls opening at midnight or 2 a.m. (some communities simply open earlier than usual rather than having a dramatic midnight study session), many yeshiva students spend Nittel napping.

“Nittel is not a particularly noteworthy event within these communities. The only people it affects are the people who study Torah regularly,” said Shulem Deen, an ex-New Square resident who wrote a memoir about leaving Hasidim titled “All Who Go Do Not Return.” “People who learn in yeshiva stop studying at 12 p.m. They save their household errands for that day. There’s also a little bit of a tradition to spend some time doing what might be considered frivolous activities, like playing chess. You’ll see people in the shul or beis midrash playing chess.”

Rapaport said the customs of Nittel Nacht are not well-recorded in the literature of Jewish law.

“There’s no authoritative source for any of this. It’s more folkloric traditions,” he said.

And even though the reasons for some of these traditions may have faded away – such as the dangers to Jews on Christmas – the customs nevertheless persist.

“Hasidic people aren’t even thinking about Christmas anymore on Nittel Nacht,” Rapaport said. “If you want to understand the Hasidic way of life, this is what it is: You don’t change anything.”