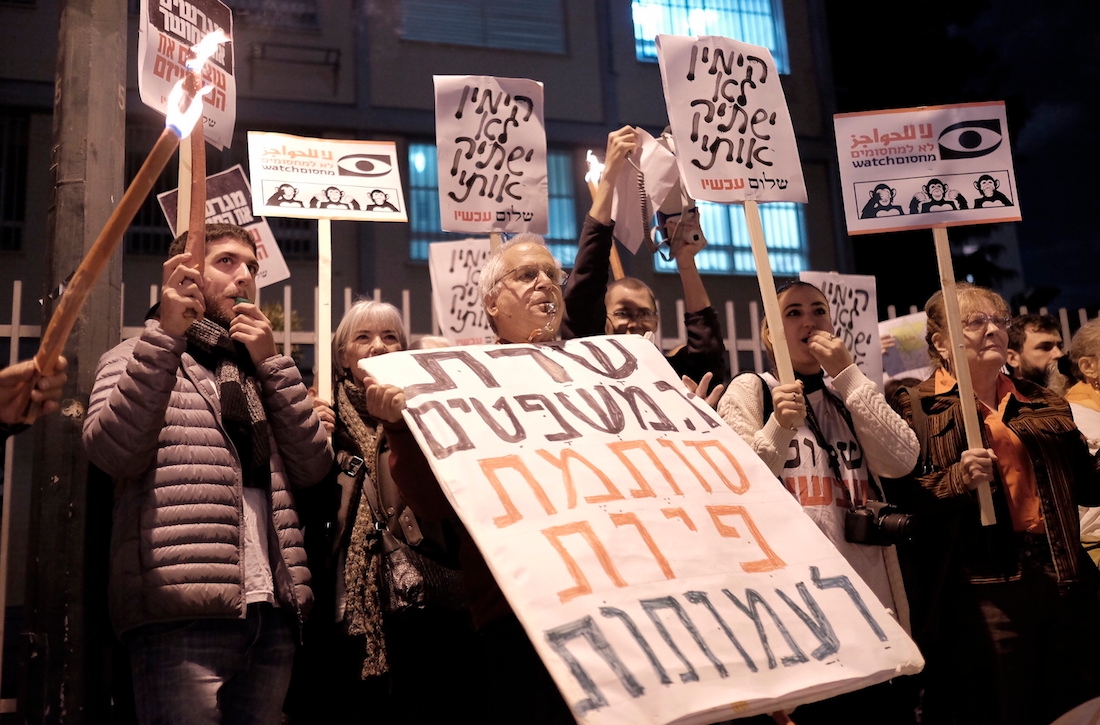 TEL AVIV (JTA) — Its backers call it a victory for transparency. Opponents say it smacks of dictatorship.

Either way, a new bill requiring certain Israeli nongovernmental organizations to publicly declare their foreign government funding is moving toward passage after it was approved by a Cabinet committee on Sunday. Justice Minister Ayelet Shaked, who proposed the bill, said it uncovers foreign meddling in Israeli affairs.

“The transparency law, which passed the ministerial committee for legislation today, doesn’t label people and doesn’t label organizations,” Shaked, a member of the pro-settler Jewish Home party, wrote Sunday on Facebook. “It labels the foreign interest of different states, which seek to enable NGOs here, and in whose name they give hundreds of millions of shekels.”

Shaked’s bill is the latest in a string of measures undertaken by Israel’s right-wing governments to target left-wing NGOs. Sunday’s vote occurred two weeks after government ministers restricted the activities of Breaking the Silence, an organization of military veterans that draws attention to alleged Israeli military abuses in the West Bank.

In 2011, the Knesset enacted a law requiring NGOs to declare any foreign government funding on a quarterly basis. A 2013 bill sought to levy high taxes on foreign government donations, but foundered after the Israeli attorney general advised that it was unconstitutional.

“This is part of the attempt to hurt groups that criticize the regime,” said Amir Fuchs, a researcher at the Israel Democracy Institute think tank. “They’re trying to put NGOs on the stand and say they’re not legitimate.”

Shaked’s bill would require NGOs that receive a majority of their support from “foreign political entities” to declare that funding and detail it every time they put out a report or speak with a public official. An earlier draft of the law would have required representatives of such groups to wear badges identifying themselves as lobbyists of foreign governments.

The NGOs affected by the bill have decried the measure as an attempt to silence opponents in Israel of the government’s policies. They say by singling out foreign government funding, which goes mostly to left-wing groups, the bill ignores foreign funding of right-wing groups by private donors.

“This creates a negative image and has no place in a democratic state,” said Yariv Oppenheimer, executive director of Peace Now, which would fall under the bill’s purview, having received donations in the past from the British, Belgian and Spanish governments. “There’s no reason I should wear a tag that says I get foreign funding while right-wing NGOs will stand next to me as if they got all their funding from home.”

Right-wing politicians have been working to clamp down on left-wing NGOs since 2009, when a United Nations report accusing Israel of war crimes cited research by left-wing groups. Shaked’s bill, which would expand the disclosure requirements of the 2011 law, comes amid a campaign by the right-wing organization Im Tirtzu, which has posted ads in major cities accusing prominent left-wing activists of being foreign “moles” in Israel and supporting terror. Israeli Justice Minister Ayelet Shaked has proposed a bill that would require NGOs that receive foreign government funding to publicize that fact in all public communications. (Hadas Parush/Flash 90)

Im Tirtzu’s founder, Ronen Shoval, wrote in a column on the news website Walla that the bill provides necessary transparency around foreign entities seeking to meddle in Israeli affairs.

“Imagine what would happen if the state of Israel chose to give money to groups in Spain working toward Catalan or, God forbid, Basque independence,” Shoval wrote. “For years, European states have been undermining Israeli democracy.”

NGO Monitor, an Israeli organization that scrutinizes the work of human rights organizations, says European governments provide some $100 million in direct or indirect funding to NGOs operating in Israel, the West Bank and Gaza — funding that constitutes an illegitimate effort to sway Israeli policy.

“When sovereign states disagree, they disagree through diplomacy and other measures,” said NGO Monitor President Gerald Steinberg, who said his group neither opposes nor supports the bill, though it has long drawn attention to what it calls the “problem” of foreign NGO funding. “They do not do it through the manipulation of civil society. When states provide money to influence policy in another country, that’s a unique infringement on sovereignty.”

Critics counter that Shaked’s bill represents a ploy to suppress dissent by taking aim largely at groups on the left. The New Israel Fund, which funds several groups that would be affected by the law, said Sunday in a statement that the bill “is a very precise imitation of the policies of Putin’s Russia and other authoritarian regimes clamping down on civil society.”

Centrist and left-wing politicians are also criticizing the bill as a vehicle to shame left-wing groups. The notion that the law enhances transparency is a sham, they say, since the 2011 law already requires financial disclosure.

Critics also called the bill inconsistent for mandating a public declaration of governmental funding, but not of private donations. Peace Now released a study earlier this month reporting that hundreds of millions of shekels in private donations to nine right-wing NGOs could not be traced to a specific individual or organization.

“This is not a law aimed at transparency, rather a law aimed at labeling Israelis,” opposition lawmaker Tzipi Livni wrote Sunday on Facebook. “The goal in this law is to label bodies that oppose the government’s policy.”